Tonight, on the way home from the gym, some part-time radio talker I’ve never heard before was going on about the Rutgers webcam story. For those that aren’t familiar with it a pair of Rutgers University students filmed an intimate gay make-out session of Tyler Clementi, 18, one of their roommates, and replayed it later. The incident apparently drove the student to jump off a New York City bridge to his death.

The film was broadcast both live and later on the iChat network all the while being hyped on Twitter.

The two students involved have been arrested and charged with invasion of privacy. The radio host was screaming on air that the students should be charged with murder—that they planned the event and ultimately killed this student.

While I agree that the decisions of these two students left a lot to be desired—and they deserve to be punished—this was little more than a prank gone very wrong. Their biggest mistake was in not realizing the reach and depth of their actions. I have little doubt both students will struggle to ever feel truly whole again. Neither of them understood the ramifications of forcefully outing someone and all that goes with it. For that they will serve a lifetime sentence and it will be a hard sentence.

If anyone should be charged with a capital crime here, in my mind, it’s homophobic conservatives the likes of which dominate the airwaves of conservative radio. 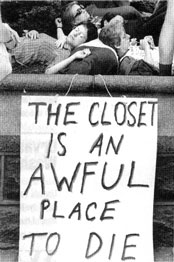 The film didn’t drive him to jump. It was his perception of his actions and how he felt he’d be seen as a result of those actions. It was the pure humiliation. He clearly lived in a world where he was driven to believe that his desires were abhorrent—that he was defective. He lived in a world where those around him (perhaps his own family) don’t believe in legalized gay marriage or even that homosexuality is a sin—or worse. Young Mr. Clementi decided to kill himself, not because of the actions of two flagrantly immature teens, but because of the humiliation that permeated his life to such a degree that he decided jumping to his death was the only choice open to him.

Take those elements away—let Tyler know that he’s every bit as normal as everyone else around him—and this tragic suicide likely never happens. That this didn’t even dawn on the host speaks volumes. He just kept saying that he doesn’t understand kids. I think that’s likely just one of many things this guy simply doesn’t understand.

Ellen DeGeneres posted a wonderful video about this and mainly finds fault with the bullying aspect. I understand that. She points out that being a kid is hard enough without bullies. My point is simple: There are some things that go with growing up and that includes having to deal with others who are also just as confused about life, morality, boundaries, compassion and direction as anyone else. That’s going to result in some issues along the way. However, when grown adults are the prime culprits in the “bullying” it’s just unacceptable. It’s one thing for a teen to make a horrible mistake. It’s quite another for an adult to do the same thing and go about solidifying those mistakes by pooling together like-minded neanderthals into a larger, more powerful entity designed to force their backward thinking onto our most fragile and impressionable fellow human beings.

That such people would look to deflect their culpability in these actions by pointing their fingers at other teens is disgusting. It’s like trying to blame the grill for a burnt steak without any regard for the cook.