Bill O’Reilly is at it again. For the last couple of weeks he’s been going on and on about how the Left is out to destroy and secularize Christmas by using phrases like “Happy Holidays” and referring to the corporate party as a “holiday party”. 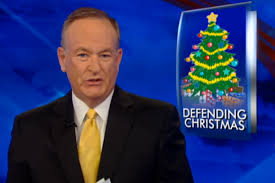 This guy really needs to see a doctor to have that large stick permanently removed from his rectum. This has nothing to do with any coordinated attack on Christmas. It has to do with common courtesy and growth — no more, no less.

It’s only a slight stone’s throw from here to surmise that Bill would have been against the idea of dropping the “N” word from our vocabulary when speaking of African Americans. Once a tradition, always a tradition, right Bill? And let’s face it, this is a guy you just know tells a good racial joke off-camera.

The only issue that I can see here is that this is yet another case of corporate America going a bit too far in their desire to please everyone and stay off the radar screens of the ACLU. The phrase that apparently got this all started for Bill and his zombie-like fans was “holiday tree”. I admit it. That’s ridiculous. Christmas trees aren’t bought by Jews or faiths other than traditional Christian faiths. They’re also bought by non-Christians who buy one to celebrate a more secular Christmas . There’s little, if any, reason to call it anything other than a Christmas tree. To a Christian, this holiday is about Christmas and the birth of Christ. To many non-religious consumers this holiday is about the traditions of their youth and for the current majority of Americans that includes a Christmas tree.

Conversely, I don’t see a damned thing wrong with calling the corporate party a “holiday party”. That’s an inclusive term, not an exclusive one. Corporate America realizes that it’s no longer 1920 (when the use of Christmas trees first became fairly universal in this country by the way). Their workforce is diverse and their parties are for everyone, including employees who aren’t traditionally Christian in their holiday make-up.

If your reading this and you’re a Christian, would you go to a Ramadan party to celebrate the Fasting of Ramadan? I certainly wouldn’t and not because I have anything against Ramadan, it’s just that it sounds like it’s aimed at a demographic that doesn’t include me. Why should non-Christians feel any differently about attending a Christmas party?

O’Reilly also suggested that people should stop shopping at establishments that use any of the non-Christian terms to refer to this period. He listed Target as a recent success by claiming that they reversed course and no longer use generic terms to refer to this holiday. Funny thing about that claim: the Target website doesn’t say Merry Christmas. I see that they have a “Holiday News Flash” and refer to “Holiday Shipping Dates”. But back to the boycott concept. Does Bill actually want this sort of thing to happen? What would happen if Jewish followers all stopped shopping at stores that used exclusive phrases like “Merry Christmas”? Just ask Target if they’d be on-board with that. What would shopping in New York City look like if everyone only shopped at stores that exclusively catered to their version of the holiday period? I suspect it’d be more likely that many people would just choose to stay home and keep their money. Great thinking Bill. Keep up the good work there.

Note to Bill O’Reilly: Christians do not have a monopoly on December just as they don’t have a monopoly on corporate events. For someone who claims to understand conservative values, he sure as hell has a major difficulty understanding that exclusivity and Christmas don’t go hand-in-hand.