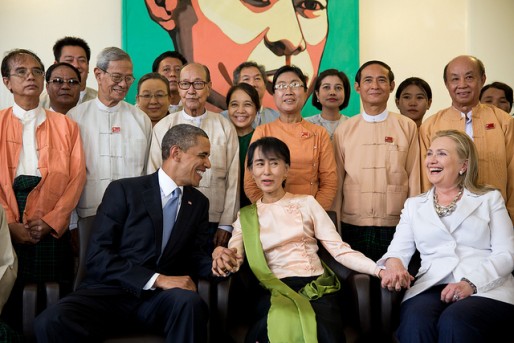 Hillary Clinton‘s return to the public sphere has led to speculation about the prospects of another presidential bid. The death of Margaret Thatcher, Britain’s first female Prime Minister, raises the question of when the United States will finally have a female President. The former First Lady, New York Senator and Secretary of State remains the likeliest suspect. She polls so well that there’s discussion about whether anyone would even want to run for the Democratic Party’s nomination against her.

Her strength in the polls comes with inflated expectations. Taegan Goddard pondered her potential fundraising prowess with the headline “Would $100 Million Help Clear the Field?” With this level of hype, you can expect snark from conservatives if Hillary chooses to run, and any other Democrat deigns to compete against her.

There have been nominees in the past who started out as overwhelming frontrunners, but still had opposition. In the 2000 Democratic primary, Vice President Al Gore still had to contend with Bill Bradley. In 1988, Vice President George H. W. Bush fought off a challenge from Bob Dole, who had spent the preceding four years as the Republican leader in the Senate, as well as Jack Kemp, Pat Robertson and former Delaware Governor Pierre S. du Pont IV.

Since those primaries, things have changed in Mrs. Clinton’s favor. She is more appealing to Democratic primary voters than Gore was in 2000, or than Papa Bush was to Republicans. She’s popular with her party, and her background is more impressive than that of any recent President. There’s also a strong consensus that it’s time for a female President, and an understanding that almost anyone who would run against Hillary in 2016 will diminish the chances of that milestone being achieved. She lost the presidential nomination to President Barack Obama in 2008, but her resume is now grander, and she has impressed many of his supporters. Her service in his administration allows her to unite the two camps in the next primary. Obama is also widely considered a once in a generation political talent, and it would be difficult to design a a better demographic fit to win the Democratic party’s nomination for President than an Under-50 African American activist/ professor just elected to the Senate in that big state next to Iowa. There doesn’t seem to be anyone on that scale on the horizon, and the primary was still rather close, despite Obama’s obvious skills, and appeal to key constituencies (African-Americans, young activists, academics and Iowa caucus-goers). Had Hillary’s campaign avoided a few mistakes, Obama’s campaign made some mistakes, or Oprah Winfrey declined to endorse, we might be asking if any Democrat would want to run against Barack Obama in 2016.

There have been some developments that will make primaries tougher for frontrunners. The last election did see the rise of publicity-hound candidates. These figures have no chance of winning their party’s nomination, but may be able to get some publicity from the effort. So they’ll have incentives to run, and get more name recognition standing on the debate stage with Hillary Clinton. Writing for the New Republic, Tod Lindberg fought back against the notion that Hillary Clinton would clear the field in a 2016 Democratic presidential primary.

There are the presidential candidates running their mouths, if I may offer homage to Marion Barry, the inimitable former mayor of Washington, D.C. Asked in 1990 about the Rev. Jesse Jackson’s reported ambition to seek public office, Barry famously replied, “Jesse don’t wanna run nothing but his mouth.” Although Barry was dismissing the possibility that Jackson would challenge him for mayor, the same comment might be germane to Jackson’s entry into the Democratic presidential primaries in 1984 and 1988. Jackson was running to advance a cause, not because he thought he could win. It’s probably fair to say that Republicans nowadays are more prone to this kind of behavior, but Clinton could also easily draw an opponent who runs to her left, mainly to make a statement. 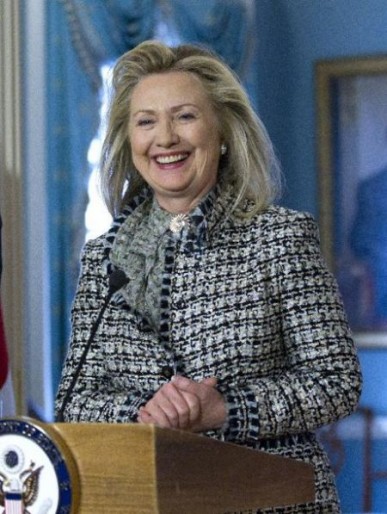 It’s not clear that unserious opponents would hurt Hillary, as it would split any opposition. So it would be better for Hillary if any ABC vote were divided between her one serious primary opponent, and four people who don’t really want to be President. She’d rather run against Cornel West and Deval Patrick,  than just against Patrick. A bigger primary field could help her, even if it initially makes her seem slightly less invincible.

Citizens United has also changed things for second-tier candidates, as it’s now much easier for them to get the funding necessary to stay in the race. In 2012, Sheldon Adelson kept Newt Gingrich‘s campaign afloat. This has worked more for extreme candidates, rather than the ones who might win the nomination. Gingrich stayed in the race while Tim Pawlenty was forced out.

Lindberg suggests that there’s also another group Hillary should worry about.

People throw themselves into presidential primaries for all sorts of reasons, only one of which is the hope and expectation that they will be on the ballot in the November quadrennial. In 1991, the Democratic Party was having an equivalent will-he-or-won’t-he over the intentions of New York Governor Mario Cuomo, whom polls indicated would enter the race as odds-on favorite for the nomination. The possibility that Cuomo would run didn’t stop an ambitious young governor from Arkansas from entering the contest. I’m pretty sure Bill Clinton was confident that he could be elected president one day. But I’m not sure he was confident that it would be in November 1992. His campaign in its early months had some of the aroma of a practice run. And a practice run can be a very valuable experience; Ronald Reagan in 1976 is an obvious example.

Is there no youngish Democratic pol out there thinking eight or 12 years down the road? None of the following—Delaware Attorney General Beau Biden, California Lieutenant Governor Gavin Newsom, representatives Chris Van Hollen and Patrick Murphy—would consider running a hopeless race just to generate national exposure and campaign experience, and to begin building a database to match their long-term aspirations?

Presidential also-rans have a mixed record. The losing candidates in the 2000 Republican primary often went on to noteworthy positions. Senator John McCain of Arizona became the party’s nominee in the next open primary cycle. Representative John Kasich of Ohio was elected Governor of the state a decade later. Businessman Herman Cain finished second in the Republican primary for Senate in Georgia, before seeking the nomination again in 2012. Former two-time Cabinet member Elizabeth Dole was soon elected to the Senate in North Carolina. Former Ambassador Alan Keyes was the Republican’s party’s nominee for Senate against future President Barack Obama.

Obama also treated his former rivals well. Joe Biden became his Vice President. Hillary Clinton became Secretary of State. Bill Richardson was offered Secretary of Commerce, before he failed the background test. Tom Vilsack is the Secretary of Agriculture. Of course, a President Hillary Clinton may have a different attitude on party unity than the current President. Bill Clinton didn’t select any of the people who ran against him for prominent posts, but he promoted prominent Democrats who sat out the primary cycle. His Vice President was a 1988 also-ran. Mario Cuomo was offered a spot on the Supreme Court. Lloyd Bentsen, the 1988 candidate for Vice President, served as Clinton’s Secretary of the Treasury. I’m unaware of anyone who believes Hillary Clinton to be less petty than her husband. In fairness to Bill Clinton, the 1992 Democratic also-rans were about as unimpressive as the 2012 Republican also-rans.

Hillary Clinton has been a public figure since the late 1970s, so her greatest challenge may be generational. A centrist statement she had made as the First Lady of Arkansas when Jimmy Carter was President could be anathema to primary voters in 2016. She’s a skilled enough politician to pander to the base, but there may face a situation in which she doesn’t realize that a pander is necessary. An awareness of this possibility may provide the greatest incentive for any progressive rival who recalls what happened the last time someone ran against Hillary Clinton.