I got up this morning which, generally, wouldn’t be a big deal except that Representative John Boehner said that if this health care thing got passed it would mean Armageddon (along with twice saying it’s an apocalypse). As I noted previously a large number of so-called experts told every conservative that would listen that health care reform was dead as a door nail. 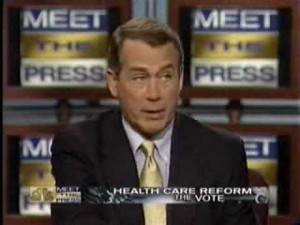 I noticed a post this morning that outlined some other examples:

Boehner said on March 17, “You know, I’ve been telling my staff nine months, ‘They can’t pass this bill.’ And finally my staff wrestled me to the ground last fall and said, ‘Mr. Boehner, we have to quit saying this because they’re gonna pass this bill.’ And I looked at my staff and I said, ‘Alright, I’ll try to throttle it back a little bit. But it’ll be over my dead body.’”

Last year David Gregory on Meet The Press asked Boehner, “So you think the plan is dead?” Boehner responded, “I think it is.”

Boehner is one of those guys I wouldn’t trust if he told me the sun came up. I’d go look out a window first. They don’t come much smarmier than this.

Conservatives and Republicans today suffered their most crushing legislative defeat since the 1960s.

It’s hard to exaggerate the magnitude of the disaster. Conservatives may cheer themselves that they’ll compensate for today’s expected vote with a big win in the November 2010 elections. […]

No illusions please: This bill will not be repealed. Even if Republicans scored a 1994 style landslide in November, how many votes could we muster to re-open the “doughnut hole” and charge seniors more for prescription drugs? How many votes to re-allow insurers to rescind policies when they discover a pre-existing condition? How many votes to banish 25 year olds from their parents’ insurance coverage? And even if the votes were there – would President Barack Obama sign such a repeal?

We followed the most radical voices in the party and the movement, and they led us to abject and irreversible defeat. […]

So today’s defeat for free-market economics and Republican values is a huge win for the conservative entertainment industry. Their listeners and viewers will now be even more enraged, even more frustrated, even more disappointed in everybody except the responsibility-free talkers on television and radio. For them, it’s mission accomplished. For the cause they purport to represent, it’s Waterloo all right: ours.

My question is a simple one now. Wouldn’t the country have been far better off if Republicans in Congress actually got involved in the process instead of just attempting to be the party of “no”? Wouldn’t we have been better off if they’d have been genuine in their efforts to work in a real bipartisan manner? As hard as this fight was Democrats would have jumped at the chance to put forth a solution that would have had a much easier path to success than what this turned out to be.

When you stand there holding your breath against something you don’t like instead of acting like an adult and dealing with it you have to be prepared for the consequences when you’re forced to give in and take a breath. The result being that there’s no one to blame for your total lack of progress but yourself.