Hello, all!  In the second part of this series, we will be exploring the Marginocephalia, from the Latin for “fringed heads.” This group of dinosaurs includes both the famous horned dinosaurs (the Ceratopsians like Triceratops) and the dome-headed, head-butting dinosaurs like Pachycephalosaurus. As mentioned in Part 1, this group and the Ornithopoda form a group of dinosaurs that all share a common ancestor, a defining characteristic of which is the possession of cheeks. Cheeks are essential for an animal that chews its food in order to keep it from falling out of its mouth. 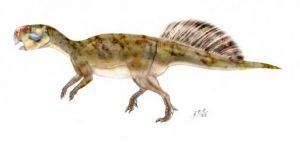 As alluded to above, there are two main groups within the Marginocephalia — the Pachycephalosaurs and the Ceratopsians. While the formal grouping of these two groups together was only recognized by Paul Sereno from The University of Chicago in 1986, the two groups have been known for much longer. Ceratopsia, which means “horned face,” was named by O. C. Marsh in 1890, while Pachycephalosauridae, which means “thick headed reptiles,” was named by Charles Sternberg in 1945.

Ceratopsians have a wonderful divers 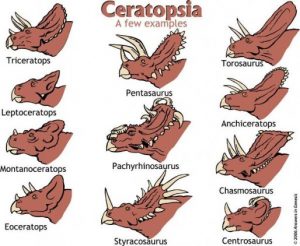 ity and are well represented in both Asia and North America. My own advisor at the University of Pennsylvania, Peter Dodson, is one of the leading experts on Ceratopsian dinosaurs. Some of the earliest members of this group include animals such as Psittacosaurus, meaning “Parrot reptile,” from China and Mongolia. These animals have a beak somewhat shaped like a parrot’s, but they have no frill or horns like their later relatives. They also appear to have some strange quill-like structures on their tails that might be, but are probably not, related to dinofuzz/feathers. The next famous representatives moving up the evolutionary tree would be something like Protoceratops, also form Mongolia. The name means “early horned face” and was discovered on an expedition led by Roy Chapman Andrews, who was the real life inspiration for Indiana Jones. (This does not at all help the public confusion about the difference between paleontology and archeology.) Finally, at the very end of the age of the dinosaurs, we find animals like the rhino-sized Triceratops, also discovered by Marsh, which lived in the same environment and at the same time as Tyrannosaurus rex. There is a stunning amount of diversity of horns and frills among the more derived Ceratopsians, which is divided into two groups based on which horns are most prominent. In the Chasmosaurinae, the two brow horns over the eyes are more prominent than the nose horn, as in Triceratops. In the Centrosaurinae, on the other hand, the nose horn is more prominent. 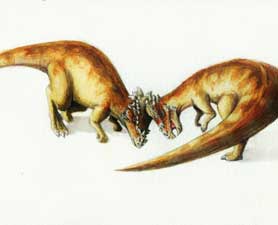 Pachycephalosaurs head butting, likely in a fight over a mate

The evolution of Pachycephalosaurs is much less well understood because their remains are notoriously patchy. Their thick skull dome is very commonly preserved because it is so robust, but the rest of their skeletons are rarely found. What we do know is that they are the group most closely related to the Ceratopsia. In addition, there has been some impressive work done on the material that we do have, which has shown fairly definitively that they did butt heads in a similar fashion to modern bighorn sheep.