Plateosaurus was an early relative of the giant sauropods.

Basal sauropodomorphs, the archaic forms at the base of the evolutionary tree, look sort of like Dino from The Flintstones. They walked on two legs, had long necks and ate vegetation. At the time that they first evolved, they were the biggest animals to have ever walked on land and possibly ever to have existed anywhere! For example, Plateosaurus could grow up to 30 feet long and lived during the Triassic Period, long before the truly giant dinosaurs had evolved. 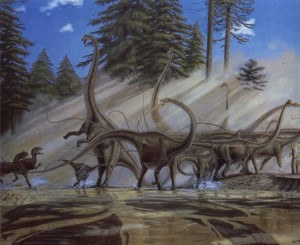 True sauropods, whose name means “lizard foot,” began to really take off during the Jurassic Period. They were named by our friend O.C. Marsh, whom I have mentioned previously.There were a number of different groups of sauropods that had various different features but all of which shared the same general body plan. Some of them are believed to have been able to crack their tails like bullwhips, creating small sonic booms. Others had little bony bumps that developed in their skin. Primarily, however, their defensive mechanism was simply their giant size. The reason that they were able to grow so big is due to what is called an evolutionary cascade of archaic and derived features, which combined together allowed them to become absolutely massive. This includes features like not chewing, which allowed them to keep a small head; laying lots of eggs to produce lots of young; avian-style air sacs that pull large amounts of air through their lungs; and a very high metabolic rate, among other things. The air sacs I will explain a little further. For a long time, it was not understood how a sauropod could have such a long neck without suffocating. If you were to breathe through a long tube, you would suffocate because you could only ever breathe air in through the tube and the tube is long enough that it contains the entirety of the breath you have exhaled. This means that you would never get fresh air. This phenomenon is called dead space. Birds, as well as other saurischians like sauropods, have large air sacs that act like bellows to push the air through the respiratory system in very large volumes. This permits the sauropods to move more air through the respiratory system than simply sits in their neck, thus allowing them to breathe.