Hello, everyone! I’m sorry about the long wait, but I’ve been pretty busy.  From now on, my posts should be much more regular than the past two months.  My first new post will be about my time in China.

Psittacosaurus, the animal that we worked on extensively in Dalian

I flew out of New York on June 21st, arriving in Beijing with a 12-hour time difference on the evening of the 22nd.  The next morning, I flew across the bay to the coastal city of Dalian.  We had no Internet in our hotel, so we had to use the Wi-Fi in this Western-style coffee shop every morning and then share a single Ethernet cable at the museum all day.  We spent each day in the museum, using two different scanners to scan dinosaur bones for Brandon’s research.  The scanners generate a 3D digital object, matching the shape of whatever tangible thing was scanned.  These models can be used in a variety of ways in order to understand things like how the bone would fare under different kinds of mechanical stresses or just how the bones differ from one another in shape.  For example, Brandon’s first significant paper based on work we’ve done at Dalian has just been published.  He shows that what had been described as three different species of dinosaurs were actually all the same animal, but their skulls had been squished in different directions so that, when they were first dug up, they appeared to be different from each other.

Dalian has a population of a few million people, which is a small city by Chinese standards.  There is some beautiful ocean scenery, and there is lots of delicious seafood.  Every evening, what had been an empty street turns into a bustling market filled with street food and the day’s catch — much of it still wriggling — as well as plenty of tchotchkes and bootleg products. 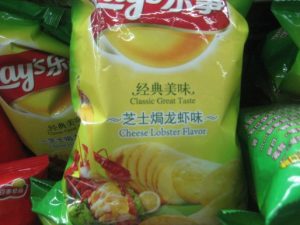 These are Cheese Lobster flavor chips. I did not try them. They also had “Fun Wasabi Shrimp” and many others.

In my opinion, food in China is a bit hit or miss.  There is some food that is really excellent.  This includes many things, from dumplings to pork buns to Peking duck.  The sauces tend to be amazing, but the quality of the meat tends to be a little bit low.  The meat is always cut up into bite-size pieces in the kitchen so that you can eat it with chopsticks, and there is usually as much fat as lean on a piece of meat in a generic dish.  There are a lot more vegetables relative to the meat than in American cuisine, and cheese is almost nonexistent.  There are also many things on the menu that Westerners tend to avoid — things like cicadas, sea cucumbers, sea urchins, chicken feet, pig feet, pig ears, etc.  I was even served live shrimp, which tasted no different from cooked shrimp and also wriggled on the plate until it was put out of its misery.  They also have simply bizarre flavors of chips and cookies and the like. 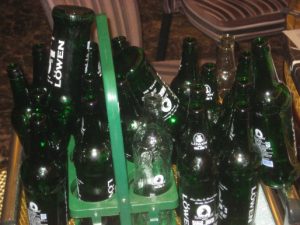 The result of our last night in Dalian

While there are other kinds of alcohol in China, by far the most prevalent are beer and bai jiu (literally “white alcohol”).  Bai jiu is both more pungent and, in my opinion, more distasteful than vodka.  Drinking culture is also quite different in China than in the States.  Throughout a meal, people will toast one another individually, leading to quite a bit of drinking.  Beer bottles are communal, with the beer being poured into little glasses.  People are toasted with a shout of “gan bei” (literally “dry the cup”), which has the connotation of cheers but which requires you to finish your glass.  Toasts are quite frequent and may target guests disproportionately, which can get quite out of hand.  It is also incredibly difficult to refuse an additional drink; the best way out of overdrinking would be to abstain entirely if you can manage it.

After a couple of weeks in Dalian, we flew out west to Lanzhou, which is about the same as flying from the American Northeast out to Denver.  I’ll describe my time out in Lanzhou in the upcoming Part 2.