Hey, so before I get started on this post, I want to apologize.  In my previous post, I mentioned that I would be updating on a more regular basis, but then I got distracted by the end of the summer with moving back in to Philadelphia and school starting up, and I haven’t actually had a chance to post again.  I plan on actually getting an update every Monday from now on. Anyways, back to China! 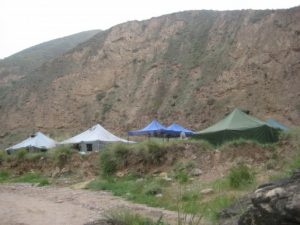 Our campsite in the mountains outside of Lanzhou

On July 2, we flew out to Lanzhou.  We had a nice dinner with our Chinese colleague Dr. Daqing Li and spent the next day doing a little bit more scanning.  This time, we were scanning a dinosaur named Auroraceratops, named by my advisor Peter after his wife Dawn. (Aurora is the Greek word for dawn.)  On the Fourth of July, we drove out of Lanzhou about an hour or so into the mountainous countryside to our campsite near the small town of Zhongpu. 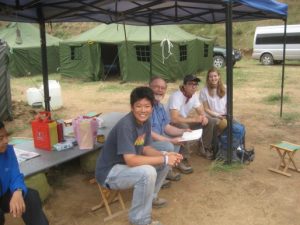 Henry, Peter, Brandon and Sam hanging out in camp

We slept in large communal tents on uncomfortable wooden cots.  We drove out from the camp each day and hiked up the mountains to our dig sites.  We would stay at our sites all day, eat lunch up on the mountains and then return to camp around four o’clock or so to have a short rest before dinner.  There is a camp cook who makes wonderful Chinese meals each day with fresh produce from a farm owned by Dr. Li’s family.  I also have a friend named Henry who is from China but goes to high school in the States.  His family came to the campsite with us to see him situated, and his father brought 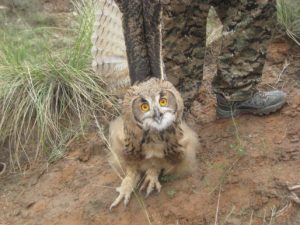 Peking Duck with him all the way out to Lanzhou, so we had a nice Chinese banquet in the middle of nowhere on the Fourth of July.  There were beer, food and merriment all around, so it was actually not so incredibly different from a normal Fourth of July, I suppose.

On our first day doing field work (7/4), we hiked up into the mountains, and Henry almost stepped on a large owl.  Everyone was quite startled, especially Lisa (Dr. Li’s dog), who clearly wanted to chase/attack the owl.  Then one of the Chinese guys actually caught it, and so we were able to spend about ten minutes up close looking at the owl before we set it free and it flew across the little valley we were in.  After that excitement, we got out to the fossil site where there were loads of fossilized fish all preserved together.  There was one little slab I was working on, probably about two square feet, that had at least ten different fish all lying on top of each other. 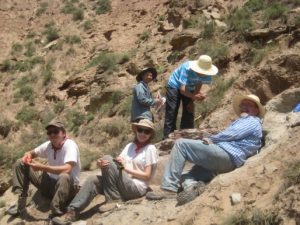 Taking a midday break at our main fossil site

The next day, we got out to the site where we would spend the rest of our week in the mountains.  This was a site right up next to the side of a cliff where there were some bones preserved.  They appeared to be mostly ribs as well as a few other bones jumbled together.  It was possible to see that they had been deposited in moving water because all of the bones were pointing the same direction due to the current.  We worked on this site for several days before we were ready to jacket it.