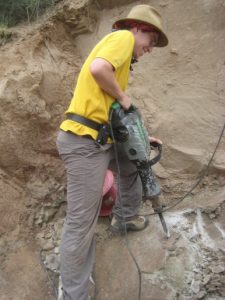 Me using a jackhammer to clear away sandstone

Hello, all!  I left off with our little work site on the mountainside. As it happens, our bones were located right in the middle of a big mess of really hard sandstone.  After a couple of days getting nowhere fast with hammers and picks, we brought out the power tools.  We actually dragged a generator up to the site and plugged in a jackhammer.  After clearing out the sandstone in the area immediately around the fossils, we jacketed the specimen and then the Chinese guys proceeded to jackhammer away at the sandstone underneath the jacket.  After carefully whittling down the giant block of stone, they flipped it over, and the entire section that had been jacketed popped right off the sandstone boulder. Whoops!  Luckily, almost the entire thing came off cleanly with the jacket, and there was only a very small amount of bone left on the sandstone piece.  After a bit of careful field preparation, the other side of the (now considerably more manageable) specimen was jacketed. 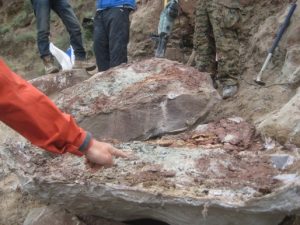 The jacket, upside down in the foreground, next to the sandstone boulder to which it had been attached

I didn’t actually see the jacket brought down the mountain because it rained on three of the seven days that we were out there.  We were not in the desert; in fact, there are farms as far as the eye can see on pretty much any bit of flat ground that is not the road.  When working with fossils, rain is good in that it can expose new material but bad in that it makes everything muddy. Fossils that would have come cleanly out of the ground are liable to simply crumble apart.  The rain therefore completely halted our progress, and we spent the time reading, going to a nearby museum and just generally wasting time until we could be productive again.

My very last day in China this year was in Beijing, and while it is not really relevant to dinosaurs, it is the story of how I got seriously ripped off by Chinese people preying on tourists.  I went to the Wangfujing, which is the famous business district in Beijing with lots of shops and tourists, etc.  I was looking for a tea set to bring home, and I expected a relaxed last few hours before turning in and preparing for the flight home. 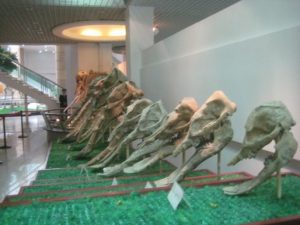 Some extinct elephants in a Chinese museum

As I was walking down the street, I was accosted by a few people, recognizing by my face that I was foreign.  These people are not uncommon. Sometimes they are simply peddling their wares, sometimes they are trying to practice their English and sometimes they are a bit more devious.  One particularly persistent girl asked me to go get a cup of coffee and talk for a bit.  Normally, I would simply say no and move on, but she was very persistent and I figured it couldn’t hurt.  Big mistake.  I mentioned that I’d prefer tea to coffee, and so we wound up in a little coffee shop and started talking.  She invited a friend to join us, so there were three of us there for about a half-hour. Eventually, the bill arrived. Now, I had been under the impression from the get-go that she was buying me a drink in exchange for conversation.  Suddenly, not only did she expect me to pay for the bill but the bill was also a staggering ¥1000 (roughly $160)!  For tea and stale bread things.  It was pretty clear that I was enormously ripped off, but without many options, I managed to get her to contribute ¥200 before I paid the rest and got the hell out of Dodge.