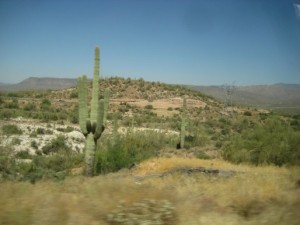 A Saguaro cactus, seen on the drive to the field site.

I flew in to Phoenix, Arizona, on Tuesday the 21st and met up with doctoral student Brandon Hedrick and undergraduate Samantha Cordero,
both from the University of Pennsylvania.  Over the next two days, we packed up our gear in the car and drove out 7 hours to our field site in New Mexico.  For the last hour or two of the drive, I had firewood piled up next to me and taking up quite a bit of personal space; it was only afterwards that I realized that I hadn’t thought to take a picture of it.  Once we got to camp, we pitched our tent, started a campfire and grilled burgers for dinner.  Then we looked at the stars for a short time before going to bed.

This was the first full day out in the field.  We spent most of the day checking on sites that we had found in the 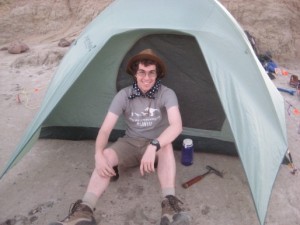 This is me at our camp site right after setting it up on the 23rd.

previous two years.  The way that fossil bones are usually found is simply by looking around and finding pieces of bone sticking out of the ground.  Sometimes there will be pieces of bone that have been weathered, eroded and then washed downhill in a desert rain; these pieces are termed “float.”  If you find float, you may be able to trace it upwards to the layer where the bone is coming out of the rocks.

One of the sites from the last year had new float coming out, which gave us some tentative hope.  We also saw some pieces of weathered bone near another old site, and we took out about 10 cm of a rib from a third site.  When digging up bones, we wrap them up in strips of burlap dipped in plaster of Paris in order to 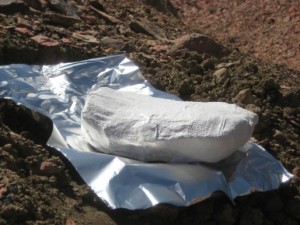 The plaster jacket we made for the rib we found.

The other thing that happened that day was that our shade structure, called an EZ-up, collapsed.  After setting it up in the morning, the approximately 15-year-old borrowed piece of equipment collapsed on us at lunchtime when it was hit by a large dust devil.  For the next few days until we drove back to Phoenix, we had to take shelter in the car during the hottest bit of the day.

At the site where we had found some new float, we dug a test pit, about one meter square, in order to try to find more bones in the ground.  Unfortunately, we couldn’t find anything.  Maybe we’ll have better luck at that site next year.

An important thing to do in the field is stratigraphy work.  Stratigraphy is the study of strata — rock layers — that enables us to correlate different localities and figure out how old they are in relation to each other as well as understand the environment of the area at the 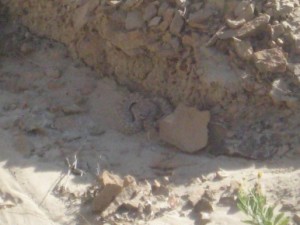 This is the small rattlesnake that we came across!

time that the rocks were deposited.  For example, our field site was a flood plain environment about 80 million years ago.  Doing stratigraphy work is called “measuring section,” and we measured 23 meters of section on this day.  We also came across a baby rattlesnake!

This morning, we went and dug out a rib that I had found last year sticking out of the side of a mound. 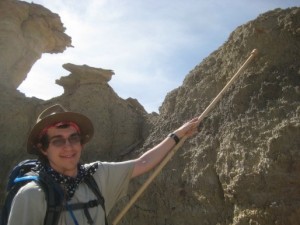 The brown fossil rib sticking out of the side of a mound.  It is directly above the end of the staff I am holding.

Unfortunately, it only went in about an inch or so, and there was no more bone anywhere around it.  After lunch, we came back and measured another 17 meters or so of section in a couple of areas.

After dinner, the moon had not risen by the time the sun set, leaving things fairly dark and allowing quite a few stars to come out.  Brandon had brought along a telescope and a star chart, so I am now able to recognize a decent number of constellations.

This morning, we measured some more section and then took the afternoon off because we had to drive back to Phoenix on the next day to meet a colleague.

Soon to be continued in Part 2…