We drove back out to the field site along with some extra volunteers and colleagues.  There were now five of us at the campsite and several more staying in rooms at a nearby mission. 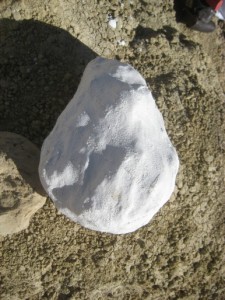 This is a plaster jacket of a partial limb bone from the croc mound.

With more people and extra cars, we finally allowed ourselves to go out to a basin badland area we’ve affectionately named “the worselands.”  There is one hill that I discovered last year that had fossil material coming out on pretty much every side and coming out of concretions on the top of the hill.  It appears to be mostly croc material, and if we’re lucky, we’ll be able to describe it as a new species.  That night, we drove over to the mission for dinner and got a flat tire on the dirt road, which we swapped out for the spare before eating.

We went into the worselands again to collect the stuff around the croc mound.  I made the first half of a jacket around a partial
limb bone that I found in a concretion, and we collected most of the rest of the things that we could see.  Around lunch time, our colleague drove the car to a nearby town to get a new tire while Brandon and I remained out in the field.  The two of us, along with one of our new arrivals, wandered out into the aptly named “worser lands” in order to get a feel for the area and hopefully find some new sites.  We got slightly lost and had to hike over quite a few tall hills for about an hour-and-a-half before we got back to camp. 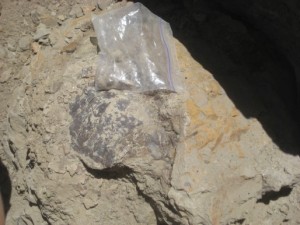 This is the exposed part of the turtle that we found.

After finishing the jacket I started yesterday, we worked on a turtle that we had found last year.  It is a very well-preserved turtle, but it was awkwardly placed next to a shelf of very hard sandstone that was difficult to work around.  We managed to dig a trench around it after much effort and put on a preliminary layer of plaster. 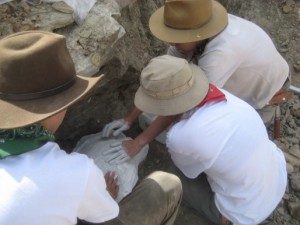 Brandon, Sam and I making a plaster jacket for the turtle.

This day became incredibly hot, and while we had planned on staying out all day, we had to return to camp for shelter from the heat.  We managed to get a more suitable plaster jacket over the top of the turtle and measured about ten meters of section out in the worselands before we had to go back.  We made a makeshift sling in order to carry out the turtle the next day.

This was our last day in the field.  We flipped the turtle, cleared out the extraneous pieces of rock underneath it and then carried it out of the worselands.  The only way out of the worselands is up a hill that gets to be about a 60-degree angle and is about ten meters high in total.  Carrying a large, unwieldy rock up a steep hill was an interesting experience to say the least.  Once we were done, we broke down camp and drove to town.  The following day, we photographed a few specimens at Ghost Ranch, a famous site for Triassic dinosaurs and other reptiles, and then I flew home the day after. 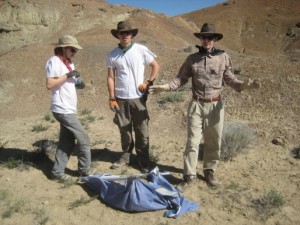 My colleagues standing around near the sling for the turtle.