I’m sorry that this post is late!  There were some weird technical problems with uploading the pictures.

Welcome to the last installment of my summer travels!  Just a heads up, but this is going to be the end of my presence as the “Special Feature.” Future posts will simply be under the heading “Science.”

After we got back to Salt Lake City, the actual classwork began.  The first day of classes was dissection.  We got into groups and dissected a juvenile alligator, a savannah monitor lizard and a green iguana.  In particular, we were looking at two leg muscles and the main jaw muscles, which we would later be reconstructing in a dinosaur.  The dinosaur that my group was working with is called Falcarius utahensis.  This dinosaur was a herbivore, but it was closely related to carnivores like Velociraptor.  Over the next few days, we learned about photogrammetry, which is this really cool technique that makes digital 3D models of objects using nothing but freeware and photographs.  We used this technique to make 3D models of a skeleton of Falcarius as well as to make models of both fossil footprints and footprints we made by running around in the mud at the Great Salt Lake.  Over the rest of the course, we also discussed respiration, the cardiovascular system, neurology, diet and other aspects of physiology that can be applied to extinct creatures. 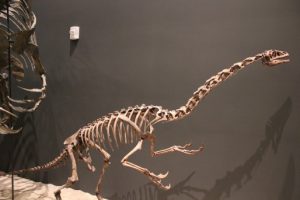 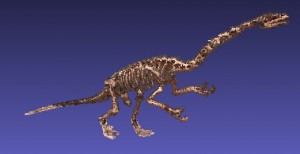 The 3D model of Falcarius that we generated using photogrammetry

At the University of Utah, Dr. Colleen Farmer, who taught the class, also runs a biology lab where they study the respiration of reptiles and of alligators in particular.  Because of this, they have a bunch of alligators living in a greenhouse on the roof of the biology building, and we got a take a look at them! 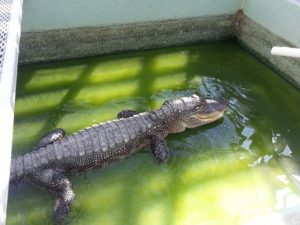 This alligator and the one that I am holding are actually the same age, but due to having been fed differently and kept in different environments, they are vastly different sizes. 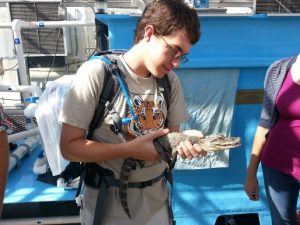 Me and a different alligator