Hello again!  To get started with this special feature, I’m going to explain just what it is that makes a dinosaur a dinosaur.  There is a lot of confusion among the general public about what constitutes a dinosaur.  Before I get into the details, a couple of rules of thumb are these: 1) dinosaurs walk with their limbs directly underneath their bodies — this is called erect posture — like mammals; and 2) dinosaurs lived on land — not in the water — and, other than birds, could not fly.  Yes, that’s right, birds are dinosaurs.  Birds are not simply descended from dinosaurs; they literally are dinosaurs, and all of their descendants will always be dinosaurs. 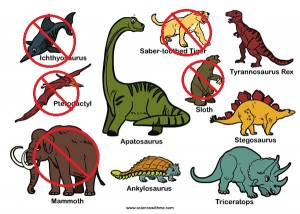 Although many people assume that pterosaurs and marine reptiles in the Mesozoic Era were dinosaurs, the simple fact is that they were not! Dinosaurs lived on land – not in the ocean – and the only dinosaurs that could fly are birds.

Why is this the case?  It comes down to the way that dinosaurs are defined.  The original definition of a dinosaur was based on shared traits — things like three main toes, three or more vertebrae in the pelvis and a hole in the hip socket — in life, this hole would be filled with cartilage, but cartilage doesn’t preserve.  In 1966, German entomologist Willi Hennig wrote the book Phylogenetic Systematics, which outlined the modern system of classification, also known as cladistics. He first published on the idea in 1950.  Cladistics works by grouping things together into a tree based on shared traits — a perfect system for studying evolution although it is also used in linguistics, astrophysics, anthropology, and textual criticism.  In fact, when Carl Linnaeus invented the traditional classification system (Kingdom, Phylum, Class, Order, Family, Genus, Species) in 1735, he did not accept evolution and was merely grouping things together because he thought that they seemed similar.  The basic unit of cladistics is the “clade”; a group of animals is a clade if and only if it includes both the most recent common ancestor of all members and all the descendants of that common ancestor.  The clade Dinosauria is defined as the most recent common ancestor of Triceratops horridus, Passer domesticus (the common house sparrow) and all of its descendants.  Therefore, by definition, all birds are dinosaurs. 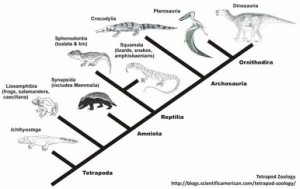 A “cladogram” is the term used for an evolutionary tree based on cladistics. This is a simple cladogram showing the evolutionary relationships of land vertebrates.

But what about “pterodactyls”? And Ichthyosaurs? And Dimetrodon? Pterosaurs were flying reptiles that lived at the same time as all non-avian dinosaurs.  People frequently call them all “pterodactyls.”  In fact, one of the earliest pterosaurs known is named Pterodactylus, but it is a single species about the size of a seagull and does not represent the entire group of animals, the largest of which — Quetzalcoatlus — was about the size of a giraffe!

Marine reptiles, including the fish-like ichthyosaurs, the long-necked plesiosaurs and the short-necked mosasaurs, were not actually particularly closely related to dinosaurs.  There is a good deal of debate on exactly where they fit into the evolutionary tree, but they were probably more closely related to lizards and snakes than they were to crocodilians, pterosaurs and dinosaurs.

Dimetrodon, the famous sail-backed animal, was a member of the group of animals called synapsids and therefore was actually more closely related to mammals than to reptiles.

So what’s the take-home message?  Dinosaurs are not extinct.  The fact is that there are twice as many living dinosaur species (~10,000) as there are living mammal species (~5,000).  They just all happen to be birds.