On Thursday the Philadelphia Flyers met the Pittsburgh Penguins in Pittsburgh. These two teams have been building up a rivalry that’s getting more feisty with each game. 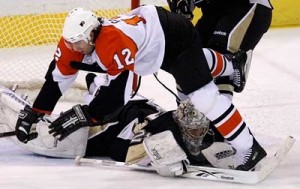 Late in the second period, with the Flyers shorthanded killing a penality, Flyers forward Simon Gagne took a shot that appeared, on first glance, to have gone into the net. The problem was the the goalie had immediately fallen onto the puck with his pads and then slid backwards into the net. Plain old physics suggests there was no way the puck didn’t cross the goal line to count as a goal. However, the referee never signaled a goal and that meant that a mandatory review would take place.

For those who don’t know hockey, whenever there’s a potential for a disputed goal, all video of the event is sent for immediate review to officials in Toronto. This unit inspects all available angles to determine the outcome and then relays their decision back to the referee at the actual game.

If the video’s inconclusive then the on-ice call remains. In this case that meant unless video showed clearly that this was a goal then Gagne wouldn’t get it.

All during the stoppage each available angle was shown in slow motion to viewers. Nothing looked conclusive enough to validate overturning the on-ice call of no goal. Even without that it was clear to anyone that there simply was no way the goalie could have covered the puck and kept it out. He’d simply slid too far back into the net. Regardless, Toronto saw nothing conclusive and the play stood without a goal.

In the end it didn’t really amount to anything with respect to the Flyers as they went on to win 7-4. That would have been the end of it except for what happened just after Toronto’s ruling.

Once the ruling is made play resumes and, at that point, nothing can change no matter what else might come to light. As if on cue the moment the puck was dropped FSN Pittsburgh, the station responsible for providing the TV coverage, showed its audience a different angle of the replay that clearly showed the puck over the goal line and it subsequently being pushed forward by the goalie out of the net. The announcers even seemed shocked with one joking, “we saved that one” meaning that they must have withheld that specific replay.

The NHL decided to investigate why this clearly conclusive replay wasn’t sent to the Toronto officials for review. Today’s news includes a story noting that FSN Pittsburgh has indefinitely suspended a member of its telecast staff, Lowell MacDonald Jr., son of former Penguins player Lowell MacDonald.

So the son of a former player, and most likely a die-hard Penguins fan, has been indefinitely suspended by the station….. Amazing. What a stupid reason to lose your job especially in this economy. Good luck finding another job in TV kid. 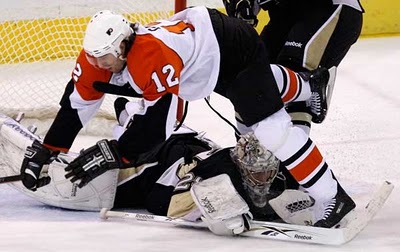