When it comes to cell phones I’m pretty archaic. I’ve never really been into the array of features that get packed into a phone. My favorite phone previously had been a very old Motorola Timeport flip-phone. That phone worked great for making calls, was simple to use and durable. The phones I’ve messed with before and after it were flimsy, complicated and unreliable. I’ve never fully understood the need for a camera in a phone. I get it. You’re carrying it with you but not everything is a picture moment and the cameras in these phones are so crappy that I wonder why anyone bothers. Then there’s the whole texting thing. I prefer computer IM’ing. If I need to get you by phone I prefer to just talk. Typing on a number pad is simply not productive. Yes, many can do it well but that doesn’t make it beneficial or optimal. 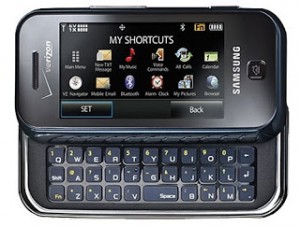 My last phone was okay. It was an LG VX8300. It wasn’t a bad phone. It was as close to the Timeport as I ever got but I didn’t get to really bond with it. One day, while at Great Adventure, it vanished from  my pants while riding Kingda Ka—the world’s largest and fastest roller coaster. It was simply ripped right out of my pocket (which was closed with a full length of velcro). The problem was that I never g0t insurance with phones and when I went to replace it Verizon wanted nearly $300. No way will I pay that much for a phone so I pulled out my very old Motorola T730 and made do with it for 18 months until my semi-annual phone replacement period rolled around.

Thankfully I didn’t have to wait quite that long. The period was up in late August but Verizon just called to offer to let me renew earlier. Enter the Samsung Glyde.

I’d been interested in the Apple iPhone for a while but wasn’t entirely sold on it or the full touch screen concept. Plus there’s no way I’m getting off of Verizon’s service or paying the service fee for the iPhone. I wanted something similar but with a real QWERTY keyboard. I finally got it down to either a Glyde, the LG Voyager or one of the Blackberry’s. In the end I decided to give the Glyde the nod as the Voyager looked a bit big and the Blackberry’s just cost too much (service) and are too wide when they have the keyboard.

The Glyde is a bit like the iPhone in that it has a touch screen and you can do some limited finger scrolling and such. However, it also slides open to showcase a pretty full QWERTY keyboard. For the level of text messaging I do this is a huge feature. It also resets the display orientation whenever you slide open the keyboard. When it’s closed the screen is tall and when closed it changes to wide.

I initially read some disturbing things about the touch screen regarding simple tasks like hanging up the phone. To conserve power the screen shuts off while you’re on a call and then when the call ends you need to hit the screen, hit the Unlock button, etc. Instead I found that you can just hit the one real button on the front (the Home button) twice and it hangs up the phone. There are a slew of other little shortcuts like this that make things a breeze (for example, just hold the C key down to flip between Vibrate-only mode and Normal mode).

The contact lists are excellent. Each contact has two mobile phone entries, a home phone, work phone, fax, e-mail and more. That’s plenty. You can also scroll them with your finger, with the keyboard, or flick your finger to have the list scroll as if it’s on an actual Rolodex. The faster you flick, the further down the list you go.

The display is plenty rich enough for me. I can read everything on it just fine and it all looks very sharp.

The size is great. It’s smaller, much smaller, than I expected but that’s fine. It’s also extremely light. The first thing I did was to order two protective products for it and I’ll likely use both together. There’s a popular coating material called invisibleSHIELD that everyone raves about. It supposedly is a very durable and resiliant transparent plastic film that goes over all parts of the phone and people swear it keeps all the scratches off. I also ordered a Body Glove which came highly recommended. The only problem there is that the designers forgot one thing—It makes the top slide tray wider so that when you slide the display up to use the keyboard, the top row of keys are partially covered by the new case. I like the case so much that I got out a hot cutting knife and manually melted away a rectangular section on the side so that it no longer gets in my way.

This is also the first phone I’ve owned that supports a wide array of customization. I have an eerie default ring tone and personal tones for most of my contacts. So many, in fact, that I’ve yet to hear the default one!

I was also glad to see that I can charge the phone using a USB cable. That should make things much easier in the future.

The camera/video camera is a 2MP camera and includes a flash and auto-focus (the Voyager doesn’t have a flash and also, if memory serves, lacks auto-focus) but I really can’t see ever using it personally.

It comes with 150MB of internal memory and that can be expanded via a microSD card (I popped a 2GB card in for now). Not sure what I’m going to bother putting on there but you never know.

It also supports a slew of additional apps and I’ve used a few. I’m a bit interested in the Navigator (GPS) feature but not for $10 a month.

In use so far it’s been very good. Call quality has been solid. The touch screen has had some issues. It tends to be hard to push the buttons in the corners for some reason. However, someone figured out that if you put tape over the battery or simply put a piece of folded paper over it and replace the back panel that this fixes the touch-pad and darned if it doesn’t! The battery has also been great.

I may have finally found a phone to replace the Timeport in my mind. Time will tell.