So Apple acknowledged the problem with their iPhone 4 this week regarding the now-infamous “death grip” and its impact on reception.

The company put out a letter on its website to its users and among the comments is this gem:

We sometimes display 4 bars when we should be displaying as few as 2 bars. Users observing a drop of several bars when they grip their iPhone in a certain way are most likely in an area with very weak signal strength, but they don’t know it because we are erroneously displaying 4 or 5 bars. Their big drop in bars is because their high bars were never real in the first place. 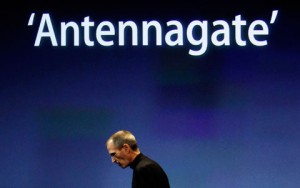 Are they kidding? Read that again and then ask yourself, how would a product like this get out of QA (quality assurance) with this sort of problem? My feeling is that it’s not a problem at all but a willful attempt to give their customers the impression of a better connection around the country than they actually have. They are, for the first time really, under heavy competitive barrage from several competitors.

Companies the like of Apple do not just make a mistake of this incredible magnitude. It simply doesn’t happen. And if, as they claim, it’s been the same algorithm since the days of the original iPhone why has no one else noticed this until now?

Sorry, I’m not buying it. I think there’s more to this story and we’re likely to find out in time.