I’ve been involved in a debate with a closed technology forum I belong to and the debate involves some recent news items pertaining to various forms of piracy including one where the industry suggests the penalties could be as high as $75 trillion dollars. I’ve been around this issue personally and professionally most of my life so I wanted to put down a few comments about it.

First of all, let’s deal with the biggest word that comes up in these arguments and that word is “theft”. One of the most amazing things about this debate is that the various industry efforts have managed to get the population to equate piracy with theft. It’s actually quite a stunning feat of marketing. 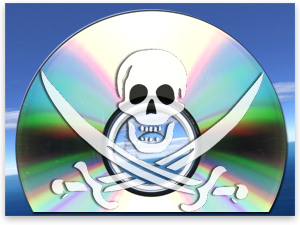 Think about the original pirates and piracy. Piracy involved pirates going onto a ship, by force, and taking away gold and other property from the original owners and sailing away with it. That’s the image the industry wants everyone to think of and that’s why they’ve worked tirelessly to make sure that downloading music, a movie, a book, a game or any digital content is referred to as piracy and those behind it as pirates or thieves.

The downloading of this type of content is not theft no matter how much the industry has brainwashed people into believing it is. Theft requires a conversion of the item in question. In order to steal something you need to have prohibited the owner from use of said item (as in a pirate taking gold that the original owner no longer has access to). No such theft occurs in these cases.

You want a more clear example of how effective this brainwashing effort has become? Think about books. A library is able to buy a book, or even more to the point, get one for free and loan it out endlessly to countless people for years on end and no one out there thinks of this as piracy or theft. Is the author being paid for all these people reading their work?

The argument that the publisher allowed this use is a bogus one. Trust me, if the publisher thought it could force everyone to pay for every single reading of a book they’d move heaven and earth to make it so. We simply wouldn’t accept it. Yet, if someone downloads the very same book that they could go to a library and read suddenly they’re a criminal.

There’s never any accounting on the positives of this sort of activity. No one ever mentions that a band, a game, a software product, a movie, gains in stature as word spreads to those of us who do pay.

I’ve often relayed the story of a client of mine back in the 80’s and 90’s who made the top football simulation of the day. Their PC game sold for $129 at a time when games were selling for $15-$30. Back at that time a huge seller sold 250,000 copies and they sold close to that number. The product was heavily copy-protected and the company worried endlessly about software piracy.

Then they put out their very first data disk. This was a disk that let you add the latest stats from the most current football season to the game. This sold for $19.95 and the company had a much higher profit margin on this item than the game itself which was laden with lots of licensing fees of the day. They were shocked when they started selling 4-5 times the number of data disks than sold copies of the game . Hmm. Clearly “piracy” had been an issue for them but to what “cost”? Upon realizing the reality of the situation the company removed the copy protection from their game and practically gave it away to people knowing they’d make more on the data disks.

A long time ago we had several word processors all vying for the top spot. There was Word Perfect, WordStar and Microsoft Word at the very top of a long list. Of the three WordStar was the most successful at the time but it was heavily copy-protected. The least protected, surprisingly, was Word. Any honest re-telling of the history of this product would be woefully inaccurate without noting that it very much managed to best its competitors due in large part to the ease by which people were able to share it amongst their friends and relatives. It wasn’t the most advanced product by any means. Comparatively at the time Word was well behind its peers and yet it kept gaining market share. Today, Microsoft continues to make billions on Microsoft Office despite the fact that it’s one of the most pirated pieces of software ever. The word spreads through common use. It’s as simple as that.

Recently Neil Gaiman (a top book author) wrote about how he doesn’t waste time worrying about piracy as it’s a sham. He makes more money as a result of it than if no one pirated his works. Many others have found the same to be true.

Here’s his commentary on it:

One of the top authors (a best-selling author with literally dozens a top-selling titles) is finding out that his books that had been long out of print are suddenly doing well being offered as ebooks on the Kindle and elsewhere and attributes this spike in part to the pirating of digital versions of those books over the years.

The idea that some company has “lost” something they never possessed in the first place is absurd. No accounting of this can factually state what someone would have paid if said copying was not possible or did not occur. Any such claim is pure foolishness. Most, lacking the access, simply would not take part in the process at all. The idea that each song downloaded cost the music industry a set amount is flat-out incorrect.

One argument that was made was that a recent poll asked respondents, “Do you spend less today on music because of piracy?” A majority of respondents said yes. The person pointing to this poll suggested it made his point when it did nothing of the sort. First, this poll didn’t ask if they themselves were downloading music. I don’t download music but I can answer yes to this question as I pay less today for music than before simply as a result of the impact of piracy. In this industry downloading has acted as a great leveler. You simply cannot get away with only offering albums for $15 today. Second, even if this did mean these people thought that, because they could “steal” the music they paid less as a result, it doesn’t mean anything. People often say one thing while reality takes them in another direction.

I used to be involved in a lot of focus group management. We had a classic situation where we asked roughly 100 parents what was more important to them, their time or their money. In every case nearly 100 people said money. We would then walk them through their daily lives, ask them very specific questions and then, at the end, have them take the test again. Nearly 100 people would then say time was more important to them. Questions like the one above regarding paying less are extremely leading and often of virtually no statistical value what-so-ever.

What’s really happened here is that, given alternatives, our younger citizens have figured out that the concept of intellectual property doesn’t have the same value that we were raised and brow-beaten into believing it has. They just don’t see it and contradictions like the library case aren’t lost on them.

Our copyright laws, to be quite frank, would make our founders vomit. None of them intended what’s going on today.

Note that I own 100% of my music and I’m glad to have contributed but I also will not pass judgment on those who have decided to take another path here. The industry has been found guilty of just as many offenses counted in the billions of dollars in price fixing which, to me, is the same type of “theft” from consumers as piracy supposedly is from the companies. You can’t have it both ways.

The bottom line is that the labels managed to create an artificial market decades ago that is no longer sustainable and what they’re seeing now is a result of that lack of sustainability. The copyright laws of yesterday have no place in the reality of today and we’ll all be better off once the rest of us recognize that.

One last thought in case you get the idea that it’s easy for me to say this without any skin in the game. I’m also an author with copyrights of my own and have no issue with anything I’m saying here.