Back when I had my first Android smartphone—the original Droid—I noticed a strange phenomenon that caused me a lot of consternation. Every so often my touchscreen would act as if it were possessed. I’d type a character and it would sometimes replicate that character and other times it would act like Linda Blair‘s character in The Exorcist by throwing up all over my input. It didn’t affect just the virtual keyboard but pretty much anything I was touching. If I played a game and this was happening the results could be entirely unpredictable. It got so bad that I actually wiped the phone a few times and replaced an entire set of ROM’s thinking they were buggy.

I then upgraded to a newer Droid RAZR and initially noticed no issues. Then, suddenly, it started doing the same thing. It’s at that point that I realized the commonality. This only happened while the phone was charging. I thought back to the original Droid and thought that might have been the case with it as well.

I started digging and, sure enough, I find countless others reporting the same issue. They’re blaming everything under the sun. It’s the cable. It’s the plug. It’s the outlet.

In my case the problem was the plug. I was using a cheap plug with a USB jack on it that you can plug any USB cable into. If I switched that out and used a Motorola-supplied plug of the same type the problem would vanish. This was a bit of good news as I just had invested in several extra-length micro USB cables to keep around the house in convenient locations and was concerned that maybe they were the issue. I get almost all my cables from from either of two great cable sources (Pacific Custom Cable or Monoprice) and have never had an issue with any of them. 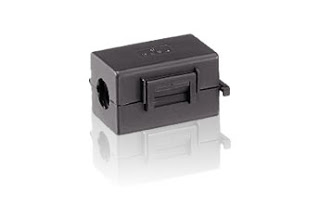 However, other people noted issues with their cables and others had problems with their actual outlets. After much research on this one I feel fairly confident that the problem is a radio frequency noise problem. RF signals are messy and all around us. In the case of cables, plugs or outlets the problem can be a defect, improper shielding, poor design or more. However, you can deal with the issue a couple different ways. You can block the RF noise my getting what’s known as a ferrite choke core. You’ve probably seen these on other devices and wondered what they were about. They’re often on USB cables themselves and they block the RF signals from getting to the device on the end of the line.

The other option is to identify the offending part and play a bit of roulette by swapping it out with another part. You can get lucky—like I did—and have it be the first thing you replace. Or you may change out the plug only to find it’s the cable, or swap out the cable and the plug only to then realize it’s the outlet. If you’re like me and you have a lot of spare parts around the house then the troubleshooting can turn into a bit of a game.

The bottom line is that you’re not crazy and your device is properly working just fine once you free it from the madness of errant RF chaos.