Today there’s a story in one of the major papers about how everyone—Google, Apple, Netflix and so many others—are putting a ton of investment and faith in the future of “the cloud”. However, they’re concerned because the various ISP’s and wireless providers are all seemingly headed towards a business model based on limits or caps to the amount of bandwidth you can get. 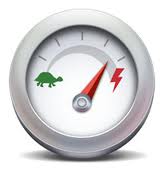 To me, Google should be looked to for a model here. Take Gmail. We all get a huge amount of storage that seems pretty much unreachable for typical users. I switched over to Gmail last year and send a lot of mail. However, in a little more than a year I’ve used just 3% of my total allotment of 7,595 MB. At that rate it’ll take more than 30 years to run out of space and that assumes the cap doesn’t increase in that time. However, I’ve also read that there are some major power users that abuse the system and are using up their space. In that case they can pay for more space and that seems entirely realistic to me. If you’re proactively doing something to use that much space why not pay a bit more (or simply pay as Gmail is free).

Let’s look at this a different way. Most users want unlimited bandwidth. They want to pay a known flat rate and just go about their lives without worry. That’s a huge benefit. If everyone had 9,600 baud modems then I suspect that each and every one of us could be downloading 24 hours a day, seven days a week and we still wouldn’t have any sort of concern for bandwidth. Granted, we’d all be frustrated as, at those speeds the web would be a disaster. However, the point is that somewhere between 9,600 baud speeds and the speeds we get today there must be a speed that ISP’s can be relatively assured of not having an issue even if everyone (or nearly everyone) abused the system. Planning the system that way also takes into account new unforeseen changes like the emergence of Netflix streaming.

My gut instinct suggests that the speed “limit” would be very much akin to today’s 65 mph. It won’t be fast enough for the impatient but it’ll be plenty fast enough to do everything 99% of us want to do on the Internet on a daily basis. The trouble starts when you get folks wanting to torrent movies all day and download them at full speed.

My point is that I wouldn’t mind paying for a slower service than I have now if I were told that, no matter what, the new speed is fully unlimited. As technology improves the speeds will increase just as they do now. Maybe we’re just going forward a bit too quickly. However, I also have some major doubts regarding the doom and gloom coming from the ISP’s. They’ve been known to be rather stingy and unreliable over the years with their view of the future and perhaps this is little more than another gambit to make it rain more cash.

I just know I don’t want to go back to the days of having service like the metered phone bill and suddenly you go from a $50 bill to a $400 bill because of some anomaly (like your child found a friend in the town just beyond the free calling region). People don’t mind power being metered as, month-in month-out it basically stays the same. No one is going to drop a small factory in your spare bedroom driving rates up 500%. There’s no way I’d trust a phone or TV-based company to apply the same approach.