Today the FCC surprised a lot of consumers by fining Verizon Wireless $1.25 million dollars for violating an agreement it made when it purchased additional spectrum from the government that it uses for it’s LTE (4G) network. Under the terms of that deal Verizon agreed that it would not limit consumers choices on how to use that data. Last year Verizon started blocking access to tethering apps. These apps allow users to turn their phones into portable wireless hotspots that can then provide Internet access for their laptops, e-book readers, tablets and more.

Many will misunderstand this as some move by the government to try to tell Verizon how to run its business, but it’s not doing that at all. The terms were clear when Verizon bid on and won the spectrum.

As a result, not only will Verizon have to pay the fine (a drop in the bucket for them) but they’ll also immediately need to allow customers access to any such app without being able to charge them an additional monthly fee to provide this feature (Verizon was charging its customers $20 a month for this option). 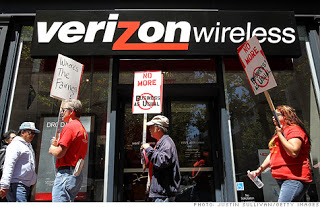 Many of us see this as charging the same customer twice for the same product. We already pay Verizon for the data and then we’re being charged again depending on how we choose to use it. This strikes me as double-dipping and should, in my view, be illegal.

Now to the point of why I’m commenting on this. In my view, Verizon can handle this ruling in one of two ways: They can complain bitterly about it and argue that their competitors now have an unfair advantage (this ruling will not impact any other mobile provider) or they can take the ruling and turn it into a real opportunity. Regardless of how they got here, they’re now here. So, how do they turn this disadvantage into an advantage?

Think about those subscribers who, once it’s time to upgrade their phones, realize they’re now going to be forced to move from an unlimited plan to a limited plan. More than a few will think about jumping ship since, for many, the only reason to stick around was the unlimited data. Without that advantage they might as well shop carriers. Verizon can now point out to those customers that sticking with Verizon means potentially saving $20 a month. I can see it already. Every customer service rep will be sure to ask if you own an e-book or a tablet and point out how you can use their phones to connect them to the Internet from anywhere. I’m sure a large percentage of customers will be surprised to know this was even possible.

In fact, instead of just pointing this out, the smartest move would be to not fight it at all but to embrace it fully and make it a major marketing check point. “We’re the only carrier offering free tethering! Why would you consider any carrier that would charge you twice for the same data?”

If they get started on this path soon they’ll win over a number of customers from the competition and, if it succeeds, they’ll either continue to win over new customers (and keep their own) or they’ll force the competitors to match them and give up the extra profit stream that puts Verizon at a disadvantage.

Either way Verizon and its customers win. However, I fully expect anything but that to happen. I expect Verizon to react poorly and look to get that money out of all the unlimited users they can and become more oppressive instead of less so. Let’s hope I’m wrong.