Google is renowned for hiring only the best of the best but the following situation will demonstrate clearly that sometimes the best and the brightest can be about as dim as a reading light on two-year-old batteries. 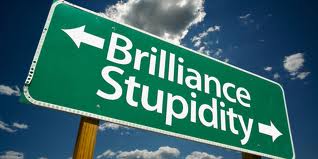 First a bit of background. I’m not a huge text message guy. I came to text messaging a bit later than everyone else. Aside from some random use I started using text messages more regularly just two years ago and then not in any numbers my friends would find impressive. Now, of course, I text often.

However, I’m also not a phone junkie. My cell phone is often sitting in a drawer nowhere near me. Given it’s limited use my phone is rarely dead from battery drain. If that seems backwards, it’s not. Since it’s not doing much of anything it will often last a day or two just sitting there and then I’ll find it and charge it back up. However, last night was different.

I got home and managed to fall asleep watching TV around 10pm. I awoke around 4:45am and wondered if I’d missed any messages so I grabbed my Droid (Verizon‘s network) and it was dead. I charged it up and at 5:02am I got a message from a friend saying, “Are you up?” The time stamp said, “Sent 5:02am”.

Wow, it was 5:03am when I got that. Is this friend really up at 5:02am? All my other phones have gotten this right so I sent a message back saying I was up and asking what they were doing up. Turns out I woke them up. They’d sent that message to me at 11pm the previous evening but my phone showed the time I received it and thought nothing of just calling that that same thing as the time it was sent (which it wasn’t).

I then started digging and I find this:

Here’s a bug that’s been around since 2008 on Android without a resolution. Google has clearly seen these countless posts from users screaming about how idiotic this is and yet nothing has been done about this.

Every other phone (that I know of) displays the time a message was sent and not the time it just happened to be received. Does no one at Google have kids yet? Imagine your phone dying and you charge it up to find a message from your child that reads, “Sent: 5:02am Dad, can you pick me up?” Pick you up?!?! From where? Of course your wife picked him up hours ago when he texted her too but because you were asleep no one bothered you with a non-issue that now has given you a heart attack. Had it read, “Sent: 7:52pm Dad, can you pick me up?” you’d clearly get the idea that he’s not sleeping on a park bench or got abducted by a pedophile. You can rest assured this was resolved long ago given the main point that there’s no subsequent trail of messages saying, “Dad?”, “Where are you?”, all running up to 5am.

I was so shocked to find this issue that I thought there had to be some setting somewhere but, lo and behold, there isn’t.

Google, are you really so busy that you cannot fix an absolutely critical piece of one of the most popular parts of your phone’s OS? It’s been 3 years now. I have to assume your stable of talented people are either brain-dead or that you’ve somehow constructed some convoluted argument that this is, in some way, a desired feature. How anyone in their right mind could come to such a conclusion is a complete mystery.