Can K2 make it to the summit?

While perusing a list of new and popular board games on one of my favorite board game marketplace sites (gamesurplus.com) my eye caught a title I wasn’t at all familiar with called K2. K2, for those that aren’t familiar with it, is the second tallest mountain in the world behind Mount Everest. K2 is actually a part of the Mount Everest range.

Mountains and mountain climbing have always fascinated me, but from a safe distance. I ski and hike, but climbing a mountain is just not in my repertoire. That doesn’t stop the allure. I’ve read the famous and unforgettable, “Into Thin Air“, saw the movie, recently caught the excellent German film “North Face“, love the real life story (and film) about the Chilean rugby team trapped in the Andes, am a big fan of Shackleton’s amazing journey on the Endurance and the list just goes on from there. 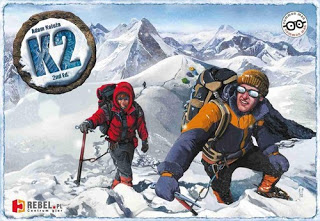 Thus a game revolving around this concept already has a leg up from me but that’s also a handicap. While I’d be apt to really like a good game on this topic, a bad one would be extremely disappointing.

The initial feel was one of concern. I’d never heard of the creator. The game wasn’t produced by a well-known publisher (for Euro-style games that is) and the reviews were sparse. When it arrived I was slightly disappointed to find a very American-like bland box with a simple cardboard separator for all the parts inside. Top Euro-style games are often renowned for their plastic-molded box inserts that carefully hold all the various bits.

Then we got to the directions. Three seasoned gamers made their attempt to scale it and two failed. I initiallly gave up halfway through. I’m not sure what it is about the descriptions that caused us such trouble, as the order of the directions is fine, but the writing just fails to really convey the process in a way that’s engaging enough to keep you going. Finally, with three gamers on-hand, I persevered and made it through to the end. We then decided to have a trial climb before two more gamers would join us looking for a speedy explanation of the game. The initial steps were slightly confused but then it all just clicked. The game, at its core, is quite simple in its mechanics and every bit of it exudes a wonderful sense of immersion into the subject matter.

Each player starts with two “climbers” represented by wooden pieces that are each uniquely shaped so that you don’t confuse them during play. They also get two tents which are shaped like the climbers. Each player also receives an identical set of 18 cards.  Players shuffle their 18 cards and draw six at random to form their starting hands. There are three types of cards: basic movement, movement by rope, and acclimation to the environment.  Finally, there are numerous risk tokens (three of which are turned face up at the start), as well as six weather cards that depict 18 days of weather conditions (two cards are displayed at a time).  Climbers must survive all 18 days on the mountain, which is the length of the game. Oh, there’s also a marker for the current start player that moves at the beginning of each round.

The turns are broken down into segments. First all players select just three cards out of the six in their hand taking into account their planned attack up (and later down) the mountain and factoring in the current weather impact (which affects specific elevations of the mountain). Then all players simultaneously show the three cards they chose. Movement points are then summed and the player with the highest movement then chooses one of the showing risk tokens (they range from zero to two points) as their team took the largest risk that turn. Another risk token is then turned up returning the number of face up tokens to three. Acclimation card values aren’t considered for this step.

Then the player with the start marker takes his turn applying his cards to the actions desired. Actions include climbing, descending, acclimating and building a tent. Each space has a movement cost (or building cost of building a tent there) ranging from one to three points. Obviously the more steep the climb the more it’ll cost the player to move there. Each climber also starts with an acclimation level of 1 with a maximum value of 10 (though at the end of any round any acclimation over 6 gets reduced back down to 6). Their impact, which was initially not clear to anyone, will become clear shortly.

After the first player finishes his actions the next player does the same and so on until all players have completed their actions. Also, any player with a risk token has to pay that value either by reducing the movement value they played or reducing an active climber’s acclimation level by one (a climber that didn’t move that turn didn’t take any risk so they can’t pay the cost). It’s at this point that acclimation then enters the game. Most every space has an acclimation impact. At the base level spaces generally either have a positive acclimation impact or no impact. At higher elevations it’s all negative and progressively so. Each climber looks at the space they’re on and the impact of the weather and adjusts their acclimation accordingly. If their level falls to zero they’ve perished on the mountain. Thus it’s essential to make sure your climbers all have proper acclimation before attempting movement and to also look at the impending weather to determine if they’ll have enough to survive any inbound storms. Acclimation is a brilliant multi-faceted concept in the game. In general parlance it means being acclimated to the elevation but here it also embodies the idea of being acclimated to the over environment including the weather. Once you see it in action you’ll start to think about another layer of clothing.

The end of the round triggers the marker for the weather to be moved to the next day (which often will change the weather one way or the other somewhere on the mountain) and the start player token is handed to the next player clockwise.

Victory points are given at different heights. Once a climber reaches a new height their victory marker moves up and it stays there even if they later go down. It can only go higher if that climber surpasses their previous height and should they ultimately die then their victory marker is set all the way back to the bottom with all progress forfeited.

I’ve glossed over a few points here but that’s the core overview of play. 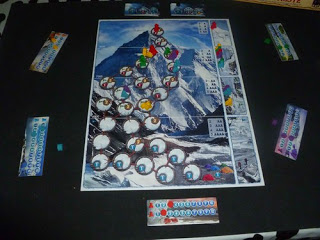 Mistakes are often fatal. In my own first game my first climber made it to within two steps of the summit only to have to quickly retreat down to the tent I built at 7,000 meters to survive a treacherous storm. That climber made two more treks towards the summit never reaching past my initial high point. My second climber also reached the exact same height and no higher. I finally had to give up my quest for the summit when I realized I simply didn’t have the movement cards left (ie, the energy) to make a final dash for the summit while also surviving. Other competing players lost climbers along the way. Three climbers made it to the peak though one ultimately perished on the descent. There’s something very eerie about the elation of a player whose climber reaches the summit as you know they’re already spooked about their likelihood of surviving the heroic effort.What’s most impressive about the game is it’s incredible level of staying true to the theme at every turn. At the beginning we couldn’t quite see the challenge. Once we got above 6,000 meters the challenge immediately made itself evident. Suddenly your climbers progress comes to a grinding halt with progress only  possible with a clear plan of action.

It was all quite exhilarating and, frankly, wondrous to play. To make it even more interesting the game includes several elements to change up the play. The board itself has two sides. On one side you’ll find K2’s easier paths to the summit. On the other are the more challenging paths. The six weather tiles come in two different sets with one having milder weather and another set that presents more challenging weather. Lastly each path up the mountain includes limitations on how many climbers can occupy a single space which gets more restrictive the higher up you progress. These limitations are even more strict in an advanced setting. There are several other games that have you essentially play against the board itself and the beauty of this one is that, unlike the others, the skill advancement doesn’t simply make the game itself harder but just the loftier goals. It’s harder to reach the summit and you are more likely to die but that’s entirely up to you. You can opt to simply be content with a less bold assault and hope your opponents take the bait instead.

All in all the game presents a seemingly limitless amount of replay value that does not seem easily overcome. There are some basic luck elements but it’s all balanced-out beautifully making it appealing to social gamers and serious gamers alike. Once you have the game down it’s easy to explain to new players and our games took around an hour so it’s well-paced too. I understand there’s now an expansion available and would love to see this expanded to include other famous mountains as well.