Earlier in the summer I reviewed a favorite new game of mine called Cards Against Humanity. The game is quite something else and absolutely not for everyone. 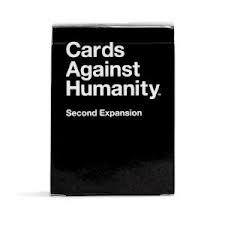 I just wanted to put up a quick note to any other fans of the game out there that their Second Expansion (yes, there was a first) has just come out.

If you haven’t tried this game, go check it out on Amazon. It’s really something and you’ll immediately realize you’re missing something big. Why? Well, first of all the game is sold out more often than not. So much so that, as of this writing, most other sources are selling it for $71 (it’s usually $25) and up.

Second, take a look at the reviews for the game. Currently there are 413 reviews. Of those, 385 are five-star reviews! 21 are four-star, four are three-star and just three are one-star (there are no two-star reviews). It’s interesting to note that, of the one-star reviews, one is a guy saying he gives it five stars in every way but feels everyone game needs a one-star review. One other review is from a guy who’s disgusted by the game which is quite interesting given that every description of it makes it quite clear what this game is all about. Thus, here’s a guy complaining that an offensive game is offensive to him. Go figure.

To date I’ve played it now nine times and literally cried from laughing too much in eight of those games.