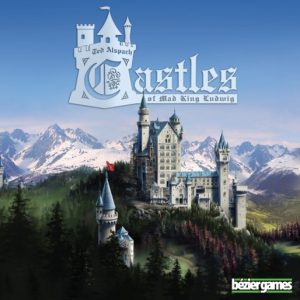 The reign of Ludwig II of Bavaria in the latter half of the 19th Century is memorable mainly for its castles. The young king couldn’t stop thinking about them. By the time of his death, he’d created some of the most extravagantly lavish castles in the world. Their iconic nature so captivated Walt Disney that they became the inspiration for the castles found in Disney theme parks worldwide. In the end, Ludwig’s single-mindedness brought about his downfall. His court had him declared insane and stripped him of his title.

Not only do his seminal creations still remain, but they also provide the underlying theme for a new board game from Bézier Games and designer Ted Alspach. I was so taken with one of Ted’s previous designs (the recently reviewed One Night Ultimate Werewolf) that I decided to put his latest, rather intriguing creation through its paces.

Players compete to build a castle that most effectively impresses their finicky ruler. This is achieved by carefully acquiring and skillfully placing various room tiles on each turn. Each room and its placement affect your score in different ways. The winner is the player with the most victory points at the end of the final round.

The game itself comes in a rather oversize box. Inside, you’ll find these items:

The board is assembled in the center of the table. On it are markings for the two decks and the various room types. Each room is unique, and the room types come in several different shapes and sizes. The room deck, room tiles, King’s Favor tokens and one of the board sections vary based on the number of players. Everyone starts with 15,000 marks in cash and three bonus cards (of which they select two and return one facedown to the bottom of the bonus card deck). Every player also takes a foyer tile and places it  in front of them. This room and its three doorways will serve as the starting hub from which the castle will grow.

A player is chosen to be the Master Builder and is given the Master Builder token. That player then draws one room card for every empty “value” space at the bottom of the “contract” board segment. The values and number of spaces are determined by the number of players in the game. A four-player game has seven segments with values of 1,000, 2,000, 4,000, 6,000, 8,000, 10,000 and 15,000 marks. On the first round, all of them are empty, so the Master Builder draws seven room cards. The cards are extremely basic. They just show a single room type. The Master Builder then takes a room tile of that type and turns it faceup, placing it below the contract board. He repeats this for the rest of the empty spaces. Once completed, the Master Builder’s hardest task then commences. The buildings below the contract board will be offered for sale to everyone playing. It’s up to the Master Builder to set the values for those rooms for that round. They do this by placing each room below one of the values. The interesting part is that rooms have a different value to each player as the game progresses. Why? The rooms come in different shapes, sizes and layouts. A room that seems obvious for one player might be entirely useless for another due in large part to how their doorways and walls line up. 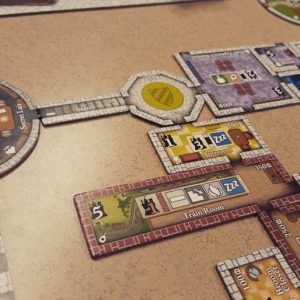 The placement and scoring of rooms is where the real action is. Every player has to think carefully about their castle’s layout. Will placement of the current room leave enough space for other rooms? Will the doors on that room help or impede the placement of other rooms? Then there’s the scoring aspect. Each room (with the exception of stairs, hallways and foyers) has a victory point value of its own. Additionally, many rooms also have scoring icons in the center of the tile. These give a bonus (or cost points) based on the current room’s connections to adjacent rooms. One gives a bonus if it connects to a “sleeping” room. Another gives a bonus for being connected to a “living” room. Activity rooms work the other way. Thematically, Activity rooms are noisy. As a result, they cost a player points if placed next to any of several different types of rooms. For example, you wouldn’t want sleeping quarters next to a loud music chamber. Skillful placement can also trigger a bonus from the room to which you’re connecting the newest room. It all makes for quite a number of compelling options.

Play continues until the last room card is drawn, triggering the final buying round and final scoring, which is different. Remember the King’s Favor tokens mentioned above? Each of those has a goal for which the King awards points. They are quite diverse and include things like most square rooms, most completed rooms, largest footage of Living rooms, etc. Points are awarded for each favor to each player based on where they ranked. Players also score 2 points for every room in their castle that was exhausted during play. They also score any bonus cards they accrued. (Remember that players start with two and that others can be gained as a completion reward.) Lastly, players receive 1 point for every 10,000 marks that they have left over.

The totals are added up, and the winner is crowned. That’s a short but fairly complete overview of the rules and mechanics of the game.

This is a pleasure to play. In my several games so far, each one has been unique, enjoyable and balanced. It’s not a game that will appeal to everyone because it is a bit meatier than more basic games. That said, it’s also a perfectly wonderful choice as an introductory step toward deeper gaming.

It’s a bit on the expensive side at $59.95, but I suspect that it’ll find its way to the table often enough to make that investment a bargain. I’m also a bit disappointed that, at that price, the game doesn’t include any sort of formfitting insert. Instead, you’ll find just a barren cardboard box and plain old reclosable plastic bags for holding everything. It works well enough, but it results in a slower setup and cleanup time.

My biggest gripe with the game is its surprisingly ambiguous instruction manual. Several critical play elements could be better explained. We managed to get there after a play or two, but that shouldn’t have been necessary. A bit more time on the manual would have cleared it all up. A reprint is already in the works, and clarifications are easily found on the forums at BoardGameGeek. I should also point out that there’s a potential for analysis paralysis, most notably during the Master Builder’s room ordering phase.

Aside from those minor concerns, this is an excellent addition to anyone’s collection, especially players looking for the perfect bridge game to bring newer gamers over to the deeper end of the pool. It’s downright fascinating to watch each player’s castle grow from a simple foyer into its final form. Don’t be surprised if non-playing family members and friends stand nearby just to watch it all unfold. The game also gives players several potential paths to victory. That sort of open design makes it infinitely replayable.

The game is designed for 1 to 4 players and is one of the rare games that’s equally enjoyable with just 2 players. Set aside roughly 90 minutes to finish. You’ll need another 10 or so just to marvel with your fellow players over all of the fun you just had building the strangest castles outside of Bavaria.