Bring out your inner star with this ingeniously creative, free-form role-playing game that will have you and three or four friends improvising the next great cinematic gem… before watching it all fall into ruin.

I grew up at the dawn of classic role-playing games. Dungeons & Dragons (D&D) exploded onto the gaming scene when I was a very-appropriate 10-year-old. Everyone talked about it. Gamers devoured it. Parents seemed entirely confused by it. The press reported countless examples of groups trying desperately to put a stop to it. Many were certain it was some sort of nefarious cult. Over time, of course, everyone settled down, and now D&D is played mainly by a small subset of dedicated gamers with limited judgment from others.

From time to time, I think about playing it again, only to run headlong into the typical problems that get in the way as you get older. First, most incarnations of the original are far more complex than what I initially played, and I just don’t have the desire to learn it all again. Second, you need to find a core group of players who can reliably get together, over a potentially long period of time, to play out a good scenario. That just doesn’t happen like it used to.

To the rescue comes Fiasco. It provides some of the best elements of role-playing games without being hindered by daunting complexity or large time commitments. Produced by Bully Pulpit Games, it’s available in a book and/or PDF file describing, in great detail, everything you need to know to play. 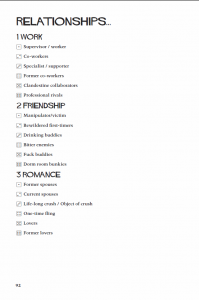 So what’s it all about? Gather four of five friends — the more creative the better — and choose a story line (called a playset). The book includes four of them, but countless others are available free, or for a small charge, on several Web sites. You then follow the directions to quickly create a surprisingly effective foundation for your little saga. This is done with standard six-sided dice that you provide. Specifically, you’ll need four dice for each intended player with half being one color and the other half being a different color.

You use the dice to assign Relationships, Needs, Objects and/or Locations (differing with each playset) that will play a key role in your story. When you’re done, everyone will have all the basic pieces from which to weave a very curious tale.

Our first game took place at McMurdo Station, a science outpost in Antarctica. My character, Captain Ross Ridley, had previously befriended the character to my left and was a former sexual partner of the character on my right. Unfortunately, my friend was also using me, and the relationship with the other player was just a bad one-night stand. Our plight was further complicated by the realization that we were all locked inside a large shipping container while one of us was carrying around a small cardboard box with the ominous word “Toxic” printed on it. Making matters worse, my old sex partner was desperate to hook up with someone else, and there we all were, stuck in the middle of nowhere, inside a locked shipping container!

Once all of the details are ironed out (about 30 minutes), the story begins. Players take turns acting out short scenes with the provided plot elements to help them along. It’s all much more natural than it might sound. Everyone acts out four scenes broken into two acts. Between the acts, the story undergoes a process called “The Tilt.” It essentially takes your finely-honed tale and throws two very large wrenches into the works.

After the final act, players then take part in what’s called “The Aftermath.” This assigns a final descriptor that each player uses as a sort of montage to bring closure to his character. My specific example was to summarize all of my brainless choices in a detailed video report, only to then mistakenly upload it to YouTube just before falling unconscious and freezing to death. It was absolutely hilarious.

There’s a bit more to the details, but it suffices to say that it all works really smoothly and quickly. Our entire scenario was played out in less than two hours, and we loved every minute of it. It’s not a game for everyone, but’s it’s much more approachable than any other role-playing game that I’ve ever tried. The beauty of Fiasco is that it gives the players everything they need without going overboard. Everyone’s continually involved, and the rules are eminently flexible, allowing for boundless creativity and variation.

If you’ve got a few clever friends that have even a passing interest in role playing of any kind, this might just be the perfect choice. Round them all up, pick a playset and enjoy the chaos. The book and PDF combo is $25, or you can pay $12 for the PDF file alone. 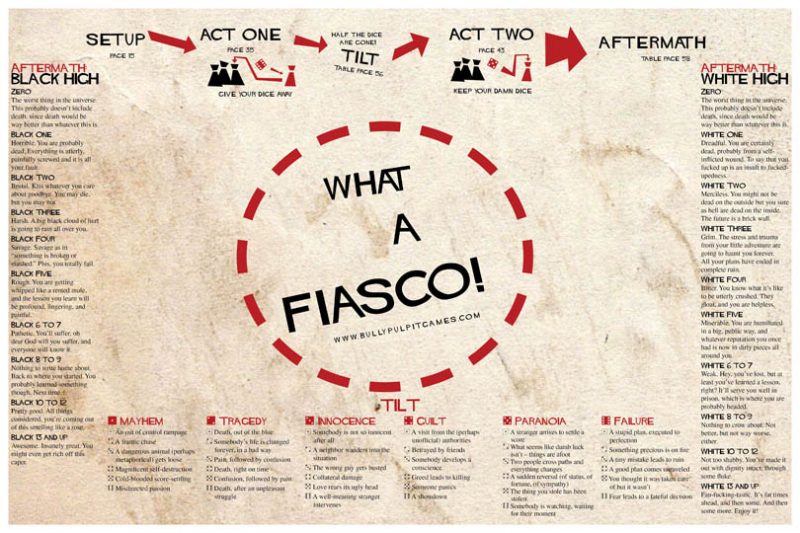