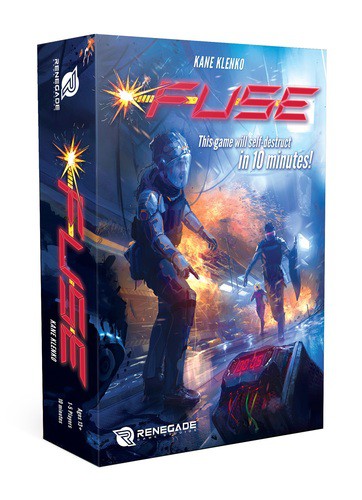 It’s a bomb squad’s worst nightmare. The team’s response center processes an endless litany of “tips” about potential mysterious explosive devices planted at area locations. Most of the callers are simple, misguided crackpots, but not all of them. The solemn look on the face of the operator handling the latest call tells you that, this time, something is quite wrong. Well-known for his cunning past successes, a criminal mastermind has just informed the center of a threat to one of the most important buildings in the region. It’s purported to be loaded with a myriad of varied explosive devices that are all designed to detonate at a set time. The team arrives at the location, only to realize to their complete horror that this is no idle threat. The devices strewn before you are all quite real, quite different and quite deadly. You look down at your watch to see that you’ve got just 10 minutes before the entire building and possibly your entire team fall victim to this villain’s latest plot. It’s go time, and there won’t be a single moment to spare.

Fuse is a frenetic cooperative puzzle game for one to five players, each tasked with defusing the bombs that they encounter during their search of a building. The task is made all the more difficult by the unique nature of every bomb. The problem is exacerbated by the reality that there are only so many resources for the team to share.

The basic concept is simple. A bomb deck is constructed based on the number of players and the desired difficulty level. Deal out two bombs face up to each team member and five more to the middle as a replacement reservoir, and set aside the remaining cards face down as a draw deck. The cards adeptly describe the “tools” needed to defuse each bomb. Those tools are represented by 25 six-sided dice in five different colors, which are placed into a supplied bag. (Think of it as your toolbox.)

A 10-minute timer is started, and the challenge begins. The starting player reaches into the dice bag and randomly selects a number of dice equal to the number of players and rolls them. Each player must take one (and only one) die from the resulting roll to apply to one of their two bombs. With luck, all of the dice will be placed. Sometimes, however, players will be unable to use any of the remaining dice on one of their bombs. This is treated like a mistake that may just cost the team. The unplayed dice are rerolled; all players must look at their current bomb cards and remove one die that matches either the color or number of each rerolled die (if possible). Sometimes, there is no impact — no one has any matching dice in play — while other times it can devastate the team’s progress. 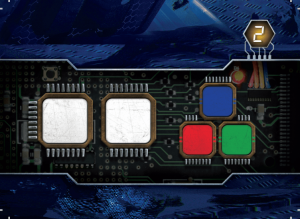 This bomb requires a pyramid stack of one red die next to a green die topped with a blue die. The white spaces are where the red and blue dice are placed.

In playing a die to a bomb, if it completes that bomb’s specific criteria for defusing, it’s removed from play. Job well done. Now it’s time to go defuse another bomb. That player selects a replacement from the pile of five known bombs in the center of the table and draws the top card of the bomb deck to replenish the pile. There’s just one catch: the bomb deck also includes its own penalty cards called fuses. If a player turns one of those face up, it shows a die that’s immediately treated just like an unused die. All players immediately pay its penalty if they are able to do so. The process is repeated until a predetermined number of bombs are defused or, more likely, the 10 minutes have evaporated along with the team in one massive explosive defeat.

Every single bomb comes with its own unique solution. For example, a simple bomb might be defused by placing two dice — a green die and a die of any color with a 3 on it. More complex bombs require more dice in more devious combinations. A bomb might require three dice where the leftmost die is of greater value than the middle die, which in turn is of lesser value than the rightmost die. Other bombs require stacking of specific dice. If at any point the stack falls over, all of its dice are returned to the bag, requiring the player to start that bomb over from scratch. It’s the thematic equivalent of extremely delicate work. The combinations seem endless and, initially, daunting. Your first playthrough will, however, give everyone a good sense of the well-thought-out icons shown on each bomb card.

Part of the beauty of the game is its scalability. There are five skill levels, from Training to Insane, each requiring an increasing number of bombs to be defused in the 10-minute window. Regardless of your gaming acumen, I highly recommend you start off with the Training level to get acquainted to the game’s rather unique pacing and nuances. Trust me. You’ll be much better off for the minor dent to your gaming pride. Another way to customize the difficulty level is to decide on the mix of bomb complexities. The hardest bombs are not used in lower skill levels. If the team defuses all of the required bombs of the selected skill level, a final score is tallied. It’s basically the sum of the value of the bomb level along with a few other bonuses.

What’s it like once the timer starts? Mass chaos — at least initially. The sheer number of elements impacting the action is quite surprising. Simply pulling out the correct number of dice is harder than you think. If you fail, you have to return them to the bag and start the turn over, losing valuable time in the process. Once the dice hit the table, player personalities and suggested strategies all become potential pitfalls. Perhaps you think a diplomatic approach is best, in which each of you discuss the best possible use of the dice in front of you, but that wastes crucial seconds. Maybe the brute force approach is best, with each player grabbing the die they need most, but that’s likely to result in potentially devastating rerolls. Both waffling personalities and alpha players add their own unique challenges to the mission. It may also not be the best game for anyone prone to embarrassment. Mistakes will be made throughout the game. By the end of the 10 minutes, the entire team will be rattled, spent or ecstatically energized. It’s quite a memorable experience no matter how it turns out.

The components are perfectly suited for the game. The bomb cards are durable and don’t really require card protectors; the dice add flavor, with each face showing its number in a font reminiscent of a digital timer. The one odd “component” is the 10-minute timer. The game doesn’t include one, instead requiring a player to either download a thematic Android or iPhone app or to supply their own timer. Obviously, a digital timer would be best, especially one with warnings as the time winds down. Another minor misstep is that the name of the app given in the directions is not the name of the application online. Search for “Renegade Games Companion App” instead. Their app does include some minor thematic touches, but you’ll mainly be too focused on your own defusing work to notice.

This brilliantly simple, highly addictive filler game from Renegade Game Studios will fascinate a fairly wide range of player types of various skill levels. The entire affair will take no more than 20 minutes (10 for the game play and another 10 for setup and brief explanations). That’s more than enough time to get the game’s appeal. The challenge is exhilarating and potentially exhausting.

The mad bomber is back on the line with a new scheme to bring the world to its knees. Are you ready to respond to the call?