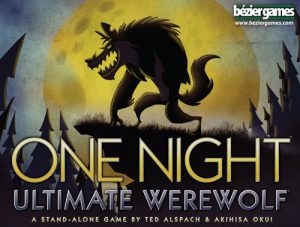 Most serious gamers out there have, at some point, come into contact with a social party game called Mafia. In Mafia, players secretly take on roles right out of The Godfather. There are mobsters, policemen, a doctor, everyday citizens and the Godfather himself. Each round, the innocent townspeople try to unmask the mafiosi through deductive reasoning and deciphering of body language. At the end of each timed round, there’s a lynching. All of the players vote on who to lynch. Mobsters try to cast doubt on the innocent, while everyone else hopes to kill off a bad guy. A few rounds after it starts, either the innocent win by killing off all of the mobsters or the mobsters win by eliminating all of the citizens. It’s an immensely fun game for social gatherings of all types.

One extremely popular variant of the game called Werewolf exchanges the underworld theme for a horror theme. A sleepy backwater village is suddenly infiltrated by blood-thirsty werewolves, and tonight there’s going to be a full moon. Our group of friends prefers this variant to that of the original. It just drips with thematic elements that only add to the fun.

That said, all Mafia games do suffer to some degree from a few issues. The first is that all Mafia variants require a narrator. The narrator doesn’t actually play, but he is essential to the game. His job is to keep track of the action and direct the players’ efforts in each round. It’s often a thankless task left to the person with the most experience playing the game. The second problem is that each round eliminates a player from active play. Every round, that means another person is left standing around quietly while the game plays out. Sometimes, it can be fun, but mostly, it’s just boring for the dead players. The final issue is that these games can take quite a while to reach their conclusion. Some last only minutes, but others can easily go on for an hour or more.

Enter Bézier Games. They’re anything but a stranger to the genre. For years, they’ve made a modest living selling a variety of different flavors of the classic Werewolf game. Now they’ve delivered a winning solution designed to fix all of the above issues. It’s a wonderfully crafted game from designers Ted Alspach and Akihisa Okui entitled One Night Ultimate Werewolf.

The game supports up to 10 players, but it is enjoyable down to as little as four. The basics of the game are simple. The werewolves win if, by the last round, none of them are found out. The villagers win if and when they unmask a werewolf. There are other nuances to winning or losing based on other roles in play, but all of them are entertaining and sometimes downright fascinating. 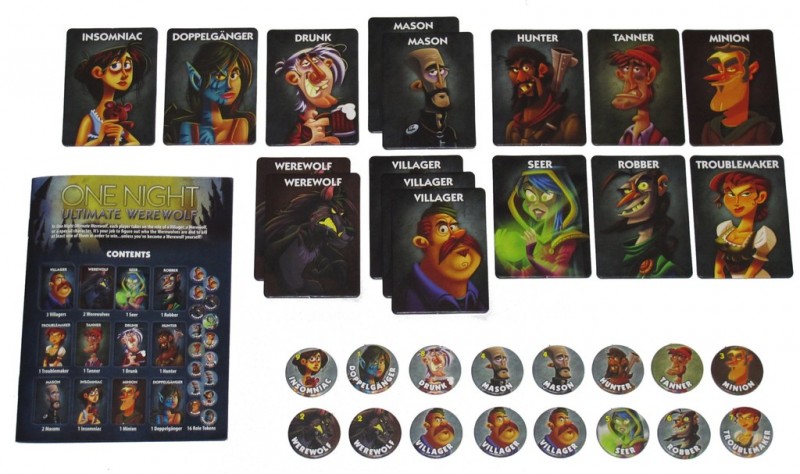 Once the total number of players are determined, the group decides which roles to include. They’re each printed onto very thick card stock complete with perfectly campy artwork. Players choose three more roles than the number of players in the game. They then shuffle all of the desired role cards and place one face down in front of each player. The three remaining cards are placed face down in the center of the table. The center cards exist purely to randomize which roles are actually being acted out by players. Maybe there are two werewolves among the town this time, or maybe there’s just one. Every game is different.

Players stand around the table and secretly look at their role card. It’s at this point that the game reveals its first major evolution. Instead of a narrator, Bézier has created a mobile app that’s available on both iOS devices (iPhones, iPads, etc.) and Android devices. The app lets the group select the roles in use before finally pressing the Play button. Suddenly, a superbly sinister voice instructs everyone to close their eyes, and the action begins. One other nice touch with the app is that it supports a selection of narrators and a host of other key settings to allow for all manner of desired play options.

Now that everyone has their eyes closed, the narrator calls out the various roles, one at a time, instructing them on how to proceed. Werewolves get to open their eyes and identify one another. The Werewolves are then instructed to close their eyes. Other special roles are called out and take their unique actions. For example, a Seer gets to look at one or two other role cards on the table. A Robber can steal a role from another unsuspecting player. The town Drunk switches out his role but is so drunk that he forgets to look at his new role. With the role call complete, everyone wakes up, and a timer begins to count down from a default of five minutes. Players have only that amount of time to figure out who is who. This is the game’s second brilliant solution. Every game comes to full resolution in under 10 minutes. 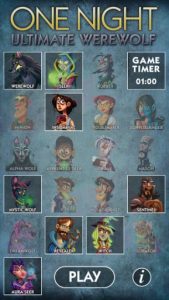 During the countdown, players can interact in almost any way that they want. They can and often do lie about their roles. Werewolves almost invariably need to lie or risk being lynched at the conclusion of the round. Invariably, two or more players claim a role where only one of them can be telling the truth. Evil players do what they can to cover their tracks and cast suspicion on other players. As the countdown comes to a close, the narrator asks everyone to simultaneously point to the player who they think is up to no good. The player or players with the most fingers pointing at them is killed off. Everyone then turns over the role cards to see which team won. The third solution is that everyone just played the entire game. No one is left out of the final fun.

Every single group to whom we introduce the game enjoys the experience no matter their interest in gaming. Many ask where they can get their own copy, and quite a few of those end up ordering it for themselves. It’s absolutely hilarious to watch close family members looking at one another with complete shock as one accuses the other of lying. Friends often try to leverage every possible angle they can imagine to convince their oldest buddies that they are, indeed, who they say they are, and those friends often won’t buy a word of it. It works equally well with players of almost any age and is inexpensive to boot at just $24.95.

The game leaves me with just two concerns. While otherwise quite sturdy, the cards can suffer from wear after only a few games. That could make the game unplayable if, for example, a Werewolf card has an identifiable mark on it. This is easily solved by using common card protectors available at any game store. The other concern involves the mobile app. How long will Bézier continue to support it? So far, they’ve done a great job continuing to update it, address minor bugs and even add new features, but at some point, it will be left behind. Players will either need to find their own alternative solution or simply revert to using a human narrator.

All in all, One Night Ultimate Werewolf is a perfect icebreaker for virtually any social gathering. Pick up a copy, and you might just find that you’re suddenly more in demand than ever before!