I have a friend who almost never fails to ask me what game I’m currently enamored with. Oddly, for possibly the first time in my life, the only game I’m currently addicted to is on my phone and it’s an Android version of a card game we often play at Penn Gamers. It’s called Tichu. When I told him about it he was fascinated and asked why he’d never read about it on the site so I figured I might as well go ahead and review it here. 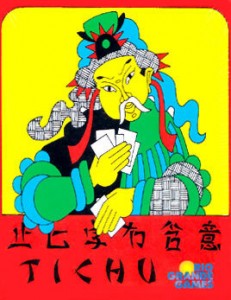 First, let’s start with the regular physical card game. Tichu is, the packaging claims, a partnership game for four players that’s all the rage in China and has been for generations. Great marketing but entirely untrue. It is, however, a variation on another Chinese card game no one reading this has ever heard of. As card games go it’s a bit daunting to explain. In fact, it’s such an undertaking that one of the most concise members of Penn Gamers has adopted the endeavor as a personal goal of his and can coherently explain all the rules of the game in under 20 minutes. If that sounds insane, I understand but it’s not like learning the nuances of Bridge, and the effort is well worth the investment. Tichu does have some of the flavor of Bridge, Poker and other games but it’s pretty unique overall. The game takes anywhere from 30 minutes to 2 hours to play (generally an hour will do it) and costs roughly $10 for a box containing two decks.

The broad strokes are simple enough. The game is played with an almost normal deck of cards. What’s different? Well, you have the typical 2 through Ace in each suit. However, where a typical deck has four suits in two colors — red and black — a Tichu deck has four unique suits each with its own color. There’s a 2 through Ace of Sword (black), Jade (green), Pagoda (blue) and Star (red). There are also four special cards called the Mah Jong, Dog, Phoenix and Dragon. More on those later.

The idea of Tichu is for your team to reach 1,000 points first. This is mainly done by playing hands and trying to “go out” (get rid of your cards) in a way that maximizes your team’s points.

First, all four players are dealt out eight cards (ultimately players will be given 14). Each player looks at these cards and, without seeing the remaining six cards to come, if a player feels confident that they’ll be able to go out before the other three players, they can declare a Grand Tichu. If that player does, in fact, go out first then his team will receive a bonus of 200 points (towards the 1,000 point total). If, however, the player fails to go out first, that team loses 200 points.

The dealer then deals out the remaining six cards to each player. Then players select three cards to give away. One card goes to the opponent on a player’s left, one to the opponent on his right and one to his partner sitting across. Once everyone selects these three cards (placing them face-down on the table) everyone swaps cards for the start of the hand. This swapping is a key element of the game. It’s your chance to convey crucial information about your hand to your partner. For example, passing them a weak card tells your partner that you likely have a strong hand. Passing him a strong card likewise tells your partner you most likely have a weak hand and, thus, hope they can do better with your strong card. There are several other intricacies to this facet of the game but let’s move on. 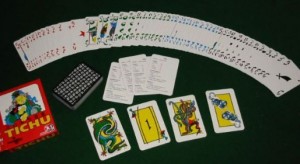 The player who ends up with the Mah Jong informs the table that they have the card and that gives them the first play (called a lead). That player then sets the tone for the round by selecting a valid card or cards to play to the table. Valid plays include singles (a single card), pairs, triples (three of a kind), a full house, straights (of at least five cards in length) or consecutive pairs of any length (2, 2, 3, 3 for example or even 8, 8, 9, 9, T, T, J, J, Q, Q). There’s also something called a bomb which we’ll touch on later.

Now let me go back to those four special cards. The Mah Jong, as we’ve seen, gives the lead to the person who held it at the start of the hand. It also has a numeric value of 1 and, as such, can be played in a straight (1, 2, 3, 4, 5, for example) or as the lowest single card. The Dog does nothing more than to transfer the lead to your partner when played. If you have the lead and play the dog (the only way it can be played) then your partner then gets the lead and plays whatever cards they want to play. The Phoenix has two roles. It’s a wild card that can stand in for any non-special card (2 through Ace) or, when played by itself, as a single that’s worth one-half more than the card it’s played on. Thus, if it’s played on an Ace it becomes an Ace and a half. The Dragon is simply the highest single card in the game. It beats an Ace and a Phoenix played on an Ace. 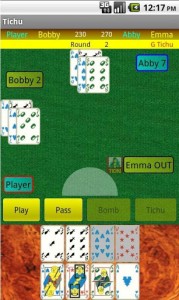 So, you look over your hand and then decide how best to proceed. If you play a single card then the round will be played for singles. If you play, for example, a two, then players can beat it by playing any higher ranking single card up to a Dragon. The round continues on until three of the four players pass. In fact, until that happens a player might pass during several turns and then choose to play a card later in the round. Say I play a 2 to start. My left opponent then goes and plays a 3. My partner passes. The opponent to my right plays a 9. I play a Queen. The player to my left plays a King. My partner then decides to get into the hand and plays an Ace. The player to might right passes. I pass and the player to my left passes. That ends the round and my partner takes the “trick” (the pile of cards played that round) because he played the last card before everyone passed. He then gets the next lead and starts the process all over again choosing whatever valid play he wants. Perhaps he plays a pair of 4’s. That can be beat by any higher ranking pair, like perhaps a pair of 6’s and so on. If someone starts with a straight of five cards then it can only be beaten by a higher ranking straight of the same length (five cards). So if I start play with 3, 4, 5, 6 and 7, it can be beat by a play of 4, 5, 6, 7, 8 or even T, J, Q, K, A. Consecutive pairs are beaten by higher ranking (but again, the same length) consecutive pairs. 2,2, 3, 3 is beaten by 8, 8, 9, 9 and so on.

The real fun revolves around predicting the outcome of play. As I mentioned, a player can declare a Grand Tichu if they think they can go out first after having only seen part of the hand. Once you have your entire hand you can, at any time before playing your first card, call Tichu which is a declaration that you’re going out first. If you do your team gets 100 points and it loses 100 points if you fail to deliver. Remember, a Tichu is different from a Grand Tichu because you declare it after seeing all your cards. It also doesn’t matter how many other cards everyone else has played. The three other players might all be down to a card or two and you can still call Tichu as long as you haven’t played a card in that round yet. Perhaps you have the Dragon (the highest single) and the rest of your hand is a 13-card straight. Once any of the players plays a single you’re likely set. They play that card, your turns comes up, you call Tichu, play the Dragon, take the trick and then go out with your 13-card straight. 100 points. If you and your partner go out first and second that’s called a One-Two and it’s worth 200 points.

Additionally the cards you’ve taken during each round may contain points. All 5s are worth five, 10s and Kings are worth 10 and the Dragon is worth 25. The Phoenix is worth -25 points so be careful with it.

The last major element of play involves Bombs. A bomb is any natural (no special cards) four-of-a-kind (like four Queens) or any natural straight flush (five or more cards all of the same suit). The fun with bombs is that they can be played out of turn. Perhaps the player to my left plays a pair of 10’s. I have a suspicion that his partner’s last two cards are a pair of Jacks. I can immediately stop play and put down any valid bomb and, if it’s not beaten, I grab the lead before the other opponent can go out. A bomb can be beaten by any higher ranking bomb of the same type (four Kings beats four Queens) or any longer bomb (a five-card straight flush beats a four-of-a-kind), and so on.

I’ve skipped over some nuances and details but the flavor of the game still comes through. It’s a game that takes a while to get down but once you get it it’s rather fascinating and addicting. Plus, there’s a fantastic version of the game on the Android market that has pretty decent A.I. players (but not perfect). I’ve now played nearly 7,000 hands of Tichu on my phone and it retains a veritable treasure trove of statistics to help you improve your game and identify weaknesses in your approach. Anyone we’ve taught the game to wants to play it again and anyone that downloads the Android version ends up addicted. You’ve been warned.