I was a bit too young when the original Doom and the rise of the first-person shooter took place, but later in life as I went back and played the classics, I grew fond of that old-school shooter feel. With each new trailer coming out for the upcoming Doom reboot, I keep thinking to myself, “This is fine, but it doesn’t really look like Doom.” I decided to dive back into the original Doom to see if my criticisms had any validity or if I’m just looking through some blood-tinted glasses.

Doom is a fast-paced, first-person shooter that basically put the genre on the map when it was first released back in 1993. It’s full of demons from hell, big shooty guns and all the blood and gore that the 1990s could conceive. It came at a time before experience bars, weapon loadouts and linear level design turned the genre into the unoriginal slog that it is in the modern world. It’s also still a damn good romp, even today.

Doom is split into multiple chapters where you power your way through a series of stages that eventually top off with a massive boss fight. These levels are pumped full of enemies to dispose of using the six unique weapons at your will. You have your typical shotgun, minigun and rocket launcher that are each valuable in their own respective manners. The catch is that ammo is scarce, so it becomes about sparing ammo for when you really need it. 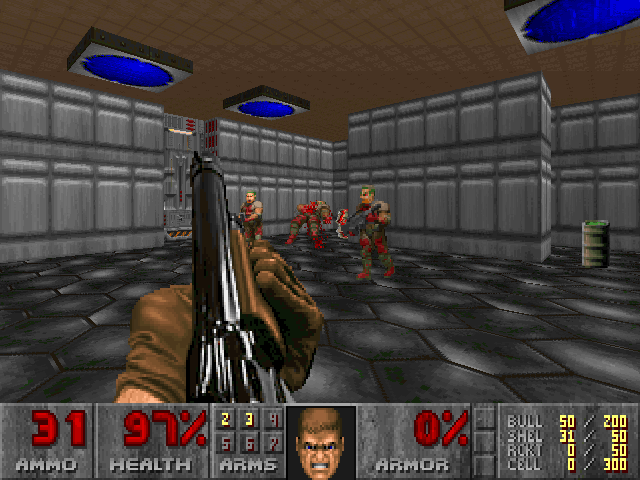 The pump-action shotgun is both reliable and deadly.

This scarcity in ammo is a bit of a double-edged sword. On one hand, I want to be able to use my super-badass weapons all of the time to blow up some baddies, but on the other hand, it creates strategy and a high skill ceiling for those who know how to balance their weapon set. For a majority of the time, you use the shotgun because of the abundance of shotgun shells lying around as well as the fact that it’s just a pretty reliable gun. As strong as it may be, the downtime in between shots is smartly designed in that it creates momentary instances of tension. You constantly have to bob and weave around the enemies to get enough shots in. While it may be more fun to mow demons down with the minigun, the focus on the shotgun is the key to making Doom feel empowering yet still incredibly tense.

If the weapons are the Yin, then the enemies are the Yang. Doom has a small but varied cast of enemies that each play their part in how you approach a situation. Pink, oinking Demons charge at you for melee attacks, while Imps hang back to fire slow moving projectiles. While the enemy types aren’t numerous, their difference in attack patterns allow for a variety of different situations. You may have a small room full of Demons charging at you or a wide room spattered with more difficult and beefy Barons of Hell. This mixing and matching of enemy types makes no two situations ever feel the same. The sounds these monsters make are also great at letting you know what type of enemy is around the corner while at the same time instilling a bit of tension.

What ties Doom all together is the brilliant level design. Levels are carefully crafted labyrinths where you have to search for keys and switches to progress. Some contain claustrophobic rooms with enemy ambushes around every corner, while others have sprawling open areas. Throughout each room are secrets to be found in hidden walls activated by switches that give you the upper hand in the form of additional weapons or health. What I love about the secrets is that they are almost always followed up with an enemy ambush. While you may have just picked up a handy-dandy rocket launcher, chances are that you’re going to have to fight your way out with it. 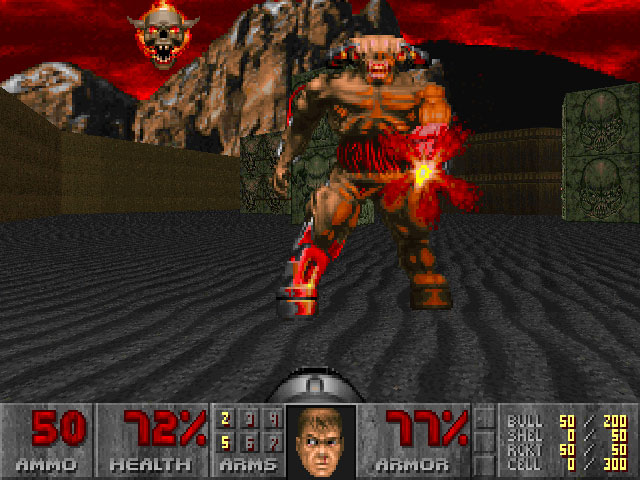 The wide-open boss areas are perfect for epic battles.

The level design also serves as a great way to encourage exploring. The nonlinear nature means that you have to backtrack to different rooms after finding certain keys. “Backtrack” is usually a bad word in video games, but Doom alleviates the pain due to how fast you move in the game. It also allows you to find secrets that you may have missed out on previously. Sometimes, the labyrinthine levels can be a bit grating to explore because the aged graphics make it hard to remember where you were, although most of the time, it works.

The holy trinity of the weapons, enemies and level design all come together to form this entirely well-knit package of bombastic kickassery. It never stops being satisfying blasting enemies with the shotgun while dodging in and out of deadly projectiles. Despite Doom being 23 years old at this point, it is more interesting and still plays far better than most shooters today. It’s safe to say that my nostalgia-filled love for Doom isn’t unfounded, while at the same time, it reaffirms my worries that the upcoming Doom reboot might fail to achieve similar success.