Moon Hunters is just on the cusp of being a great game. The concept of a cooperative, isometric hack-n-slasher where you create your own story line in a procedurally generated world sounds awesome on paper. In actuality, these ideas don’t come to fruition as much as I had hoped. A lack of meaningful content, polish and proper online multiplayer integration keep Moon Hunters from reaching that aforementioned vision.

Moon Hunters has you pick from a set of six warriors to battle through a short 45-minute campaign. In this campaign, you’re presented little story beats where you get to make a binary choice that impacts your character’s personality and story. Upon completion of the campaign, you’re given a summary of the actions that your character performed and how they will be known in that universe. This sounds pretty cool in theory, but the focus of Moon Hunters on short campaigns transforms it into a repetitive slog. 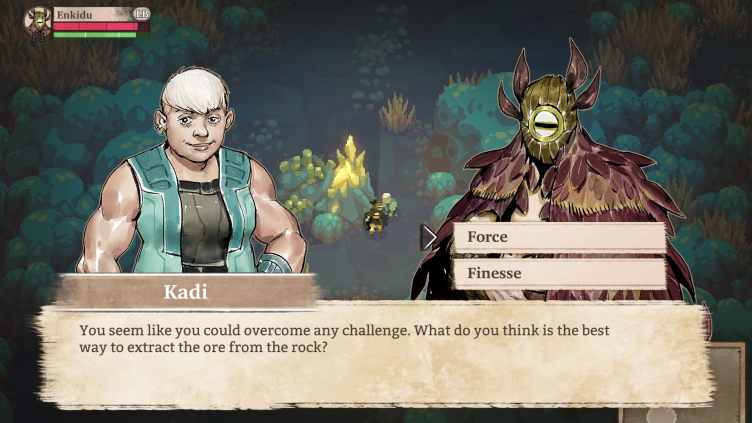 Often, you have to make a choice that impacts your character’s personality.

Every time you start a new campaign, the major story components are always the same. You always encounter the same Sun Cultist after a certain day, speak to the same people at your starting camp and come across the same story motifs out in the wild. All of these story elements have the same choices to make, so if you’ve seen them once, you already know what the outcomes are. The payoff for how you choose to act in the campaign is wholly unsatisfying and feels half-baked because of a lack of engagement with that world.

Luckily, the combat pulls some of the weight off the weak storytelling, but still doesn’t quite reach the heights that it could’ve. Moon Hunters plays as a simplified Diablo clone, with each character having three unique abilities to eliminate copious numbers of baddies. The druid Enidku can lay down vines to slow enemies while firing from afar with his ranged attacks. When playing in multiplayer mode, it can be pretty enjoyable utilizing everyone’s abilities in conjunction with one another. If you’re playing solo, the experience will be more of a grind as you try to find the right openings to attack without getting hit. While I wish there was a bit more depth to the combat, I can appreciate the simplicity for getting friends into the game without having to teach them much.

Killing enemies causes them to drop precious opals that can then be used to purchase upgrades for your character. For example, the aforementioned Enidku can alter the way his ranged attack works by shooting more projectiles and having them pierce through enemies. I quite liked how impactful these upgrades were and also how they can alter a certain character’s play style. This variety in upgrades helps alleviate some of the repetitive nature of the campaigns. 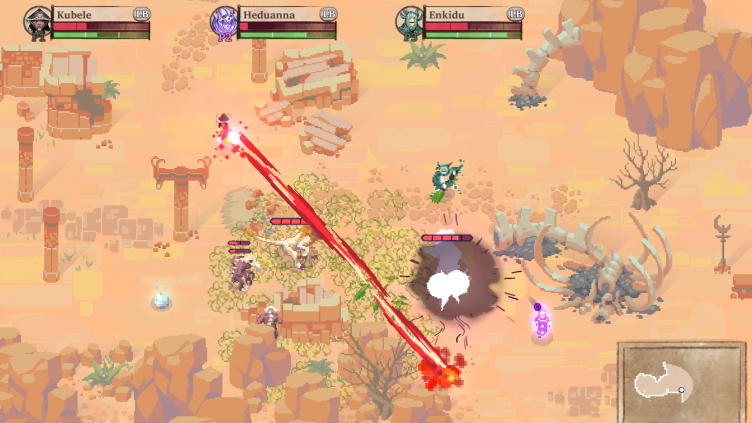 The combat in Moon Hunters can be pretty fun with some friends by your side.

With a solid combat system in place, it’s a shame that there just isn’t enough content in Moon Hunters. There are a very small number of enemy types spread across the paltry four locales. To add insult to injury, the final boss at the end of the campaign is always the same and is almost always a total pushover. Because of this lack of content, going through a new campaign feels repetitive and unsurprising when it should feel exciting to create a new and exciting journey. The procedurally generated nature of the campaigns feels entirely wasted when so much of the adventure is telegraphed.

Moon Hunters also suffers from a lack of polish, which is unfortunate because of the wonderful presentation in the art style and music. Enemies constantly get caught on the environment, allowing me to easily dispatch them, while at other times, they don’t even attack me despite me hitting them. One particular creature has a shielded head, forcing you to attack it from behind, but often, my attacks still didn’t connect. Other bugs include the final boss’s health bar continuing to stay on screen after the credits and some nonplayable characters having placeholder names. The worst offender of all is that the online multiplayer mode uses a convoluted peer-to-peer system that forces you to go through outside sources to figure out how to set it up. Allowing players to simply invite friends or join a lobby of random people is a critical feature missing for such a multiplayer-focused game.

Moon Hunters is by no means a bad game; it’s just an unfinished game. The unique design behind the procedurally generated story lines mixed with isometric action are great for the first couple of hours. After spending more time with it, the cracks start to show in its repetitive structure because of the severe lack of variety. Playing with friends alleviates some of the boredom, but even that is limited because of the poor integration of an online multiplayer mode. More than anything, Moon Hunters left me disappointed in that it couldn’t quite hit the awesome ideas that it set out to produce.