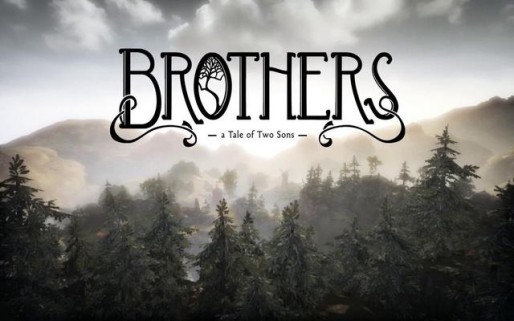 One of the hardest things to accomplish when making a video game is telling a compelling story. Very rarely do games manage to successfully engage the player in the world while at the same time providing enjoyment in the game play. Some games sacrifice strong game play for the sake of the story or hinder the story elements because of a disconnection with the game play. Brothers: A Tale of Two Sons tries its hardest to reach a perfect balance between the two but fails in delivering both satisfying game play and meaningful characters to care about.

Brothers: A Tale of Two Sons begins with a deceased mother and dying father with his two young sons left to take care of him. A local doctor tells the sons of a magical tree far away that is said to have a remedy to cure their father. The only problem is that there is a distinct lack of connection to any of the characters because of the unintelligible language they speak. Everything is spoken in gibberish with no subtitles to understand what the characters are saying, leaving only hand motions and facial expressions to get a grasp on the character interactions. I kept longing to be connected to these characters, but there were no situations until the end to help convey any emotions.

It doesn’t help that the character models aren’t exactly good to look at. They seem outdated, and the art style isn’t unique enough to make up for it. What helps to keep the player slightly engaged are the absolutely beautiful scenery and environments that the brothers encounter along the journey. The two sons cross vast chasms, explore looming castles made for giants and climb mountains to save their father. There is a scent of mysticism about the world around them, but none of it is explained or even hinted at. There is even an odd sense of egoism to it. Benches are placed around the locales that the brothers can sit on so that the developers can force a wide landscape to the player’s view. These elements, along with the lack of a real language and music that tries too hard to be epic, result in a very weak experience that shows that the developers didn’t have a real, clear vision for their game. 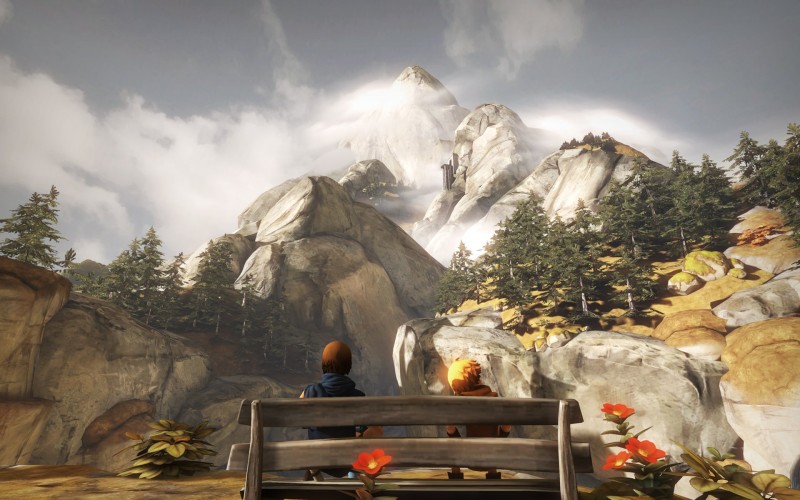 The game play attempts to focus this vision and to set Brothers: A Tale of Two Sons apart from the rest of the “art” video games by focusing on camaraderie between the brothers. Rather than take control of just one brother, you control both at the same time. The left stick controls one brother while the right stick controls the other. Both left and right triggers are used for each respective brother to interact with the environment. Because of their difference in age and size, the brothers have individual qualities that affect the game’s mechanics. For instance, the younger brother can fit through gates while the older brother can pull heavy levers. These distinct nuances add a unique asymmetric feel to the game play.

The idea of two brothers working together to solve puzzles is an interesting and compelling concept at first, but it is severely hindered by the controls. Moving the two brothers feels clunky, and they’d often run odd ways as I tried to constantly compute in my brain which stick controls which brother. Compounded upon this is the action trigger used for climbing or controlling switches. Brothers: A Tale of Two Sons really only offers any challenge because of the disorientating controls. In fact, the puzzles presented to the brothers require the littlest amount of thought to solve. There are times where it gets the formula perfectly in sections in which the brothers are on separate platforms, pulling levers and opening gates to let the other one progress. There’s a hint of brilliance here, but I ultimately felt bored, hoping for something to keep me interested in the hollow characters.

The brothers have to work together to get past each obstacle in their way.

By the end of hour three along the journey and when I had just started to get a hang of the controls, the story ends. Some games can get away with this $15 price tag for a short experience, but unfortunately, Brothers: A Tale of Two Sons doesn’t deserve your time. Beautiful scenery and environments can’t save the fact that the developers are desperately trying to tug at your heartstrings and are instead yanking in a manner lacking confidence. On top of the boring characters and weak storytelling are disorienting controls and simple puzzles that only hurt the experience rather than help. Brothers: A Tale of Two Sons could’ve been something really special, but it ultimately falls into the category of uninspiring.

Brothers: A Tale of Two Sons is available for download on Xbox 360, PlayStation 3 and PC.