When it comes to board gaming I’ve been at it a long time. The same is true for my sports-based gaming. I go back to card-based sports gaming including old classics like APBA Baseball, Cadaco’s All-Star Baseball, Strat-O-Matic Baseball, Sports Illustrated’s Statis Pro Baseball and several others covering basketball, auto racing, boxing and more (including some of my own designs). Then in 1985 all of that changed when I read a story in Games magazine outlining a brand new concept then called Rotisserie League Baseball.

This was something amazing. Card-based games were always stuck in the past as they’re all based on, at best, the previous year’s statistics. Plus, there was always the issue of players who only played a few games in real life that season but did well. When their cards came out of course they had insanely inflated stats that would then throw a major wrench into the realism of our leagues. In the end the older games, while wonderful in their own way, were inherently predictable.

Roto-leagues (as they later were called) started springing up soon after and morphed into the phenomenon we know today as fantasy sports leagues. These felt so much more like the real deal and required an actual level of scouting, instincts, being able to respond to real injuries and more. However, fantasy football never held any allure for me as it was always handicapped by only being able to present a subset of player positions. How does one statistically account for an offensive lineman’s abilities?

I became aware of a game being designed by an accounting guru that looked to be something a bit different. He already had a number of other games including a pretty interesting horse racing game. The big issue with his designs had been approachability. The games are generally very numbers-heavy and interface-light. When one of my other hobbies waned I decided to give his football game a shot. 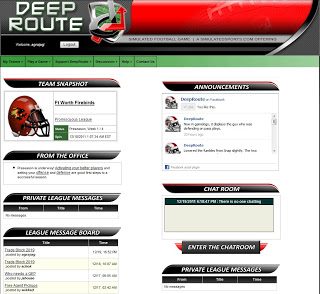 It’s called Deep Route and it’s unlike anything else I’ve ever encountered.  The main difference between this game and anything else is that it’s all built around fictional players. At first that seemed like a huge turn-off. Who can get excited about football players you’ve never heard of and, in fact, don’t even exist?

The game itself is broken up in several different types and levels of leagues. There are dozens of them. Some play games nearly every day of the week while others play much less. The one I chose plays two games a week (and that’s one of the least active leagues available) and it goes on all year. Our games are held every Tuesday and Saturday. Also, different leagues play by different rules regarding salaries, injuries and so forth. You choose the flavor and involvement level you want and see if there’s a league opening (many leagues are totally booked). If there is and you see a team you’re interested in you take over as its owner. Oh, you also have complete control over your teams’ location, name, logo, uniforms and more. While none of that impacts play it lets you feel more connected to the team. 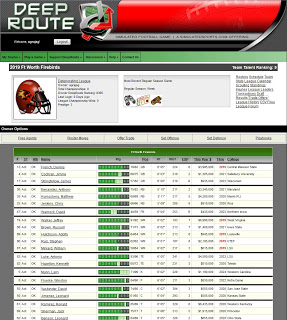 Part of the Firebirds Roster

The core game is free to play though there are value-added pay features that may or may not increase your chances of winning. For example, you can buy points to apply to various things like scrimmages to test your team against others (even in other leagues) or the use of intermediate play calling options or advanced playbooks. None of it is very expensive. It’s all here. Also, when I say playbooks, I mean complete sets of plays that you can design entirely from scratch if you so desire.
In my setup I have offensive playbooks that dictate very specific player substitutions so that I have both a run-oriented setup (with lots of run-blocking linemen) and a pass-oriented setup where the emphasis is, of course, more on pass blocking and catching.

NFL rules are mainly followed with a few minor exceptions and you determine your depth chart, roster make-up and type of offensive and defensive play calling that fits your style. Everything then comes down to the schedule. There’s a free agent signing period, a detailed draft, four pre-seasons games, final cuts and then a full 16-game schedule and playoffs culminating in a championship game. As noted, depending on the frequency some leagues may play quite a few seasons in a single year. My own league plays an entire cycle in about two months and thus we play six seasons in every year—and remember, this is considered a slow league.

The real meat of the game is in its player management design. Every player is laden with a bevvy of statistics that can boggle the mind and each position brings its own twist. Height and weight matter (differently for each position). Age matters. Additionally there are 34 main stats rated for both potential and realized skills for a total of 68. Like real life much potential is never realized and as you age that potential diminishes. There’s also endless debate between owners in every league about the impact of each stat for each position and what makes for the best players in each position. No one is truly sure of the “secret sauce” underneath it all. Stats are also saved from season to season and there’s a full league history of every player who ever existed and what they did. 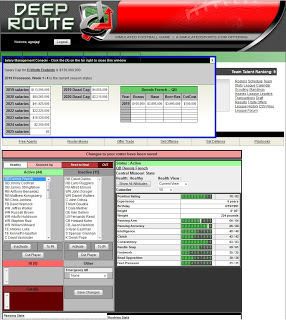 Games get played in the middle of the night during what are called “spin” periods. You’ll wake up after the latest spin with the choice to just see the outcome, watch the game in a play-by-play mode or other variations. You don’t actually have any input during the playing of the game. All your work is done beforehand so once the game starts it’s all computer AI from there until it’s over.
The unknown nature of the underpinnings can be entirely fascinating. For example, on the team I took over I kept looking at one defensive end that hadn’t really done anything special previously in his career. He’d been a backup and then a starter at Left Defensive End. To underscore how realistic things can get every position is unique even when you think it might not matter. There are two defensive ends in football—one on the right side of the defensive line and one on the left. Here that distinction’s critical. The left defensive end is generally pass-rushing the quarterback from the side a right-handed quarterback can easily see and thus LDE’s get far fewer opportunities to sack the quarterback than do Right Defensive Ends (who rush from the quarterback’s “blind side”). An RDE thus needs a different skill set than an LDE. Your RDE should be more agile and more easily able to shed the blocker in front of him. This LDE of mine, named Chris Blackburn, looked like he had all the tools to be a solid RDE, so, against his history I started him there. The result? He ended up leading the league in sacks and was a top finisher in the Most Valuable Player voting at the end of the season. I couldn’t help but smile every time he nailed the opposing quarterback. Now I’ve got a real dilemma because I drafted what looks to be an even better RDE last season that I played as a linebacker for his first year (during which he got faster and bigger). He led my team in tackles and was a major force in several games so now I may actually move Blackburn back to his old position in favor of the younger player. As they’re not actual people no one’s left to complain though I still feel oddly disloyal for this virtual slight. 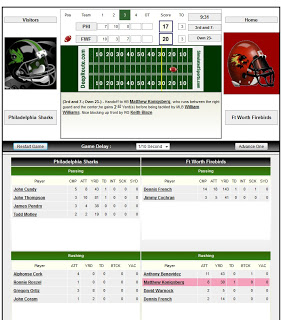 The game isn’t without its problems. As I noted, it’s not the prettiest game out there. It’s mainly a bunch of text so it requires a good amount of imagination (though watching games is much like watching real play-by-play games on ESPN) and the site design is often not only bland but also uninspired and less than optimal. Sometimes it’s even buggy in places. Probably the biggest issue is simply its sheer depth. This game simulates—well—an astounding amount of the real game and that means there’s so much to digest here that it will simply overwhelm the vast majority of typical gamers out there. The interface only exacerbates this situation.
However, the developers are constantly there looking to improve all the aspects of the game and the main elements are alive and well. Plus the community is thriving and engaging. Rivalries over which leagues are the most competitive spring up and several people own many teams in different leagues all at the same time.

My concern about fictional players is mainly gone. I now care more about my own aging QB—Dennis French—and his possible future replacement that I just drafted—James Stringfellow—than I do about any actual pro players. The only down side I find is that I can’t easily stay connected to players on other teams like you can with NFL players who are on TV or in the news continually. Other owners seem to have no such problem so it might just be my newness to the game.

I took over my team in the final weeks of one season and had my first full season from October to December. My team finished that first partial season as a wild-card team and I won my first play-off game only to get crushed in the next game. In my first full season my team got off to a great start, then faltered in the middle before finishing on a tear to win my division. The playoffs ended the same with a win and then a loss. During the season I lost three major players to serious injury and learned a treasure trove of information about how the game actually works. It’s all quite addicting once you get the hang of it. I really recommend it wholeheartedly, but with the caveat that it’s not for those without patience.