Destiny is the best mediocre game that I’ve ever played. It’s an odd accolade, no doubt, but the game does many things exceptionally and many things dreadfully. It’s because Destiny suffers from a severe case of identity crisis. It tries to be an action-packed, sci-fi shooter surrounded in massively-multiplayer online (MMO) mechanics and role-playing game leveling, but it’s all done in mediocrity.

Destiny is Bungie’s first foray out of the hugely popular and successful Halo series, and they didn’t really venture into any new territory here. Destiny is just another sci-fi first-person shooter. Where Halo succeeded in crafting an interesting story to drag you along with the campaign, Destiny tries to go the ambiguous route with its story. It doesn’t fare well, and for most of the time spent doing missions, I hadn’t a clue what I was doing or why I was doing it. Your companion Ghost, with miserable voice-over work by Peter Dinklage, follows you along to try to provide some exposition, but none of it comes across clearly. It’s really a shame because the worlds you can explore are rich with detail and accompanied by a striking original score that gives you that “final frontier” feel.

The mission structure in Destiny doesn’t help the cause, either, because most of the missions are incredibly repetitive. You get dropped down onto one of four planets and go through an area while killing enemies, then Ghost has to scan something while you defend him. The next mission in that planet takes you through much of the same area, but on a slightly different path. There is also a free-roaming mode on each planet to explore and complete side quests. Again, these are terribly boring, with the objective usually being to kill a certain number of enemies or scan some environmental structure. You also can’t obtain multiple missions in these areas, which is an annoying design decision. 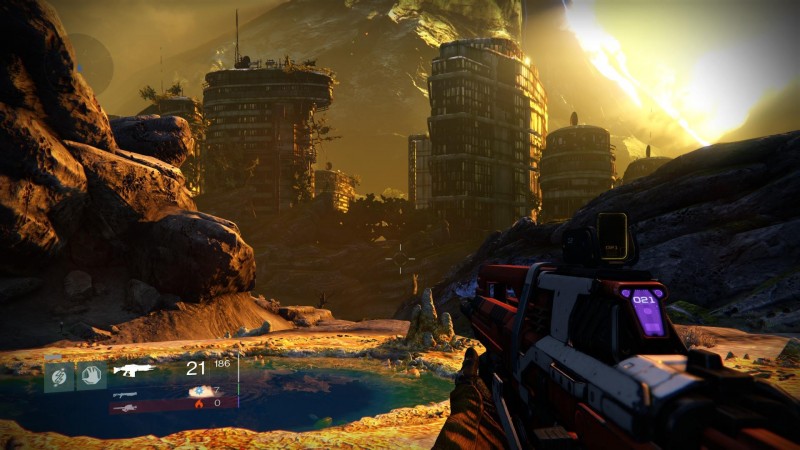 The worlds in Destiny are beautiful but aren’t really worth exploring.

Thankfully, the actual combat helps make Destiny worth playing. You’re given a choice between three classes of Guardians — Titan, Hunter or Warlock. Each class has a semi-unique set of skills and abilities to unlock as you gain experience killing monsters and completing missions. The problem is that the skills aren’t anything to write home about. You get one distinct and powerful ability called a super, and the other two are designated as grenade and melee modifiers. These abilities also have very large cooldowns until you get better gear, so most of your time is spent just shooting. This is similar to my qualms with the Borderlands series; having a small number of abilities to use is boring and leaves a lot to be desired. Also, the enhancers for the abilities you gain from leveling up don’t stack, meaning that you have to pick one enhancer over another. It never really feels like you’re becoming more powerful, and instead, that power trip is designated to the guns.

As you complete missions, you start to find new guns to use. The weapons at your disposal are a primary weapon like automatic rifles or burst rifles, a special weapon such as shotguns or sniper rifles and a heavy weapon, which are rocket launchers or heavy machine guns. The random loot system means that you constantly find newer and more powerful weapons that have different minor attributes like rate of fire or stability. It was great to constantly try out different weapons and switch up my play style based on what I found. I just wish that the weapons were more interesting instead of the standard first-person shooter fare.

After unlocking more of my abilities and finding new guns, the combat really started to click. Shooting monsters at their weak points, lobbing grenades into clusters of enemies and firing off powerful super attacks never stops feeling satisfying. The ability to hover or double- or even triple-jump throughout combat keeps the action fast-paced and moving as well as allows for some pretty slick acrobatics. 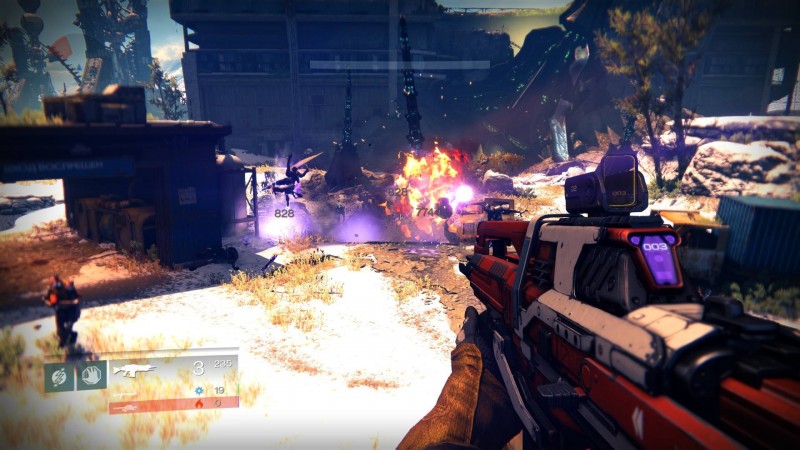 Piecing together the abilities and gunplay both looks and feels good.

Destiny is all the better when played with other people. Sure, you can get through the entire story going solo, but it is far more enjoyable when you play with friends. If you don’t, Destiny does an atrocious job of making it easy to play with random people online. There isn’t any matchmaking system to do the story missions with other people, so instead, you have to randomly invite people you run into. Even when you stumble upon some other players in the world, there isn’t any proximity voice chat. For being such a heavily forced social experience, Destiny sure doesn’t want you talking to anyone.

If you’re not too fond of co-op play, a competitive multiplayer mode is an option in the Crucible mode. While the number of modes is saddening, the strong point of Destiny in its combat shines again in multiplayer. Something about it just has that Halo feel as you battle others in and out of interesting maps. What’s great is that any progress made in the campaign translates into the Crucible and vice versa; any of the cool abilities you have will work in multiplayer mode for your advantage. Unfortunately, the Iron Banner mode, in which your actual gun and armor stats count, won’t arrive until October.

You also gain experience as well as loot after each match, so you don’t feel left out if you don’t enjoy the co-op experience as much. My biggest gripe with the Crucible is that the loot is randomly given out after a match rather than to the player who did the best work for the team. For countless times, I dominated a match, but my teammate who died 20 times got items instead of me.

After completing the main story missions, Destiny opens up a bit for end-game activities. For co-op play, Strike mode missions will be the brunt of what you play. There are only eight Strike missions, though, and by the time you’ve completed the story, chances are that you’ve played them all. These Strike missions are far tougher and guarantee a bit more loot after battling through a series of bosses. A matchmaking system can pair you up automatically with other players, and you’ll need them because some of the bosses can be downright absurd in difficulty.

The bosses in general are terribly designed and a chore to battle. While some bosses are unique artistically, most are oversize normal enemies with a ridiculously large health bar. They don’t really require any intelligent tactics to beat, and most of the time, you just shoot, hide, shoot and so on. The battles often take up to 20 or 30 minutes, but if all three members of your team die, you have to restart the entire fight. Many times, I had to restart a long fight over and over because my team happened to get blindsided by the numerous enemies that flood these fights to artificially increase difficulty. At the end of these long and difficult Strike missions, the only reward is one or two items. 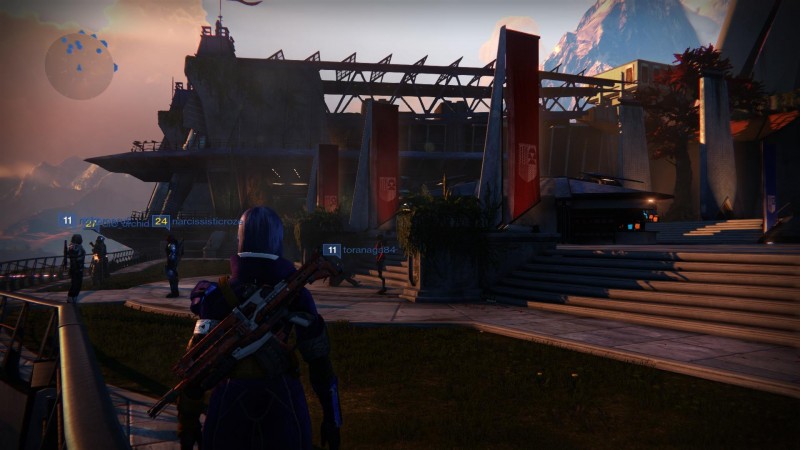 The central hub called the Tower is filled with people, but you can’t even talk to them through voice chat.

The loot system in Destiny is utter garbage. Destiny poses as this long-term game where you constantly find and upgrade gear, but it’s not the case. In order to progress past certain levels, high-quality gear is necessary. The legendary items are incredibly rare, and even when you find a legendary engram, decoding it almost always results in a non-legendary item. The other route to getting legendary items requires ranking up in Vanguard via co-op play or Crucible mode. The problem with this route is that it takes an insane amount of time to progress in ranks, and earning the special currency to buy these legendary items is capped weekly. I’m not asking to have my high-level gear be handed to me, but after playing for so long, it grows increasingly frustrating to not be able to progress.

There are also a series of design decisions that range from peculiar to downright dumb. As you pick up items, many of them are called engrams that require decoding before it’s revealed what the items actually are. The only way to decode these is to head back to the Tower, which kills the pace if you want to continually push through missions. This wouldn’t be bad except that the load times can be up to a minute long. This occurs in multiplayer modes as well, and along with all of the presentation fluff, it can take several minutes before you’re back into another match. The matchmaking system is also poorly designed in that you often play the same Strike mission in co-op play or the same map in multiplayer mode in a row. There’s no veto or voting system like every other popular modern shooter has adopted. The most aggravating design decision of all is not being able to skip cinematics. Playing through story missions again on harder difficulties or for bounties became painful; I had to watch the same cinematics with the same terrible dialogue and story that I couldn’t follow.

The oddest thing about how I feel about Destiny is that, as I write this, I long to head right back in. Jumping into a mission with friends as we battle through a Strike mission or tear up scrubs in multiplayer mode can still be a lot of fun. It’s just a shame that everything surrounding the superb combat is half-baked. Destiny is desperately trying to draw mechanics from other genres, but instead of embracing them, it just holds them at arm’s length. There’s a great game somewhere in here, Maybe Bungie will update and patch some of the glaring issues, but until then, Destiny is just a big pile of mediocrity.