Generally, I have never really enjoyed the genre of “beat-’em-ups,” as they tend to be repetitive, shallow games. Dragon’s Crown looks to change that idea by forging the beat-’em-up genre with RPG mechanics, coated in a gorgeous art style and presentation. While it never quite reaches its true potential, Dragon’s Crown succeeds in creating an innovative game that plays very differently depending on which character you play.

There are six different classes, ranging from the beefy brute of the fighter to the difficult but rewarding sorceress. I chose the fighter for my playthrough and quickly began my quest for the Dragon’s Crown. What that quest entails is a bunch of annoying cinematics and intrusive story elements that hold you back from getting to the meat of the game. Based in a single town, there are different places to shop and apply for quests. However, there is no voice acting, and everything is told through a narrator. It feels lazy, and the constant bickering from non-playable characters to try to tell a lukewarm story becomes irritating. The worst is the narrator in that, every time you exit some part of the town, he will repeat what you’re supposed to be doing. You enter and exit shops multiple times before adventuring, and it can really be grating to hear the narrator after a while. Luckily, he can be turned off, but it is unfortunate that this has to be done at all. 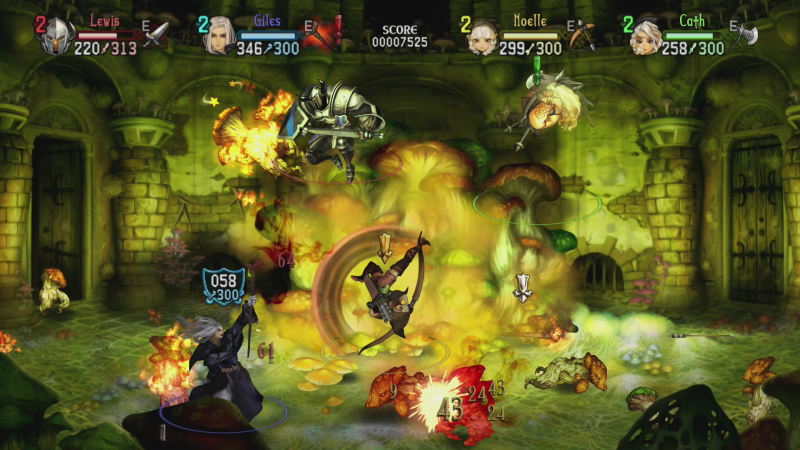 After making your rounds in the town, you’ll warp to a location and start getting into the fray. While the combat is still standard beat-’em-up fare, spells, items and different combat moves can be performed to keep the action from feeling too stale. Littered throughout the levels are chests to be opened and secrets — usually pertaining to side quests — to be found. The end of each stage has a unique boss that is always a challenge to take on. Up to three allies can join you on your adventures, whether it be computers or people online. Unfortunately, it takes about five hours before you’re even allowed to play online.

Even more disappointing is the lack of places to explore. Only those nine areas can be visited, with each level having two paths once you get past the first nine. From here, the game turns into a bit of a grind, but it is set up in a way that it is quite addictive. Once you’ve completed an area, you can choose to either return to town to spend your hard earned cash or head back out to another random stage but with multipliers on the experience or cash earned. You’ll play through the same stages over and over, and it is here that the lack of stages really makes itself apparent. However, it’s increasingly satisfying to get with a good group of three other people online, hack and slash through multiple stages and return with tons of loot. 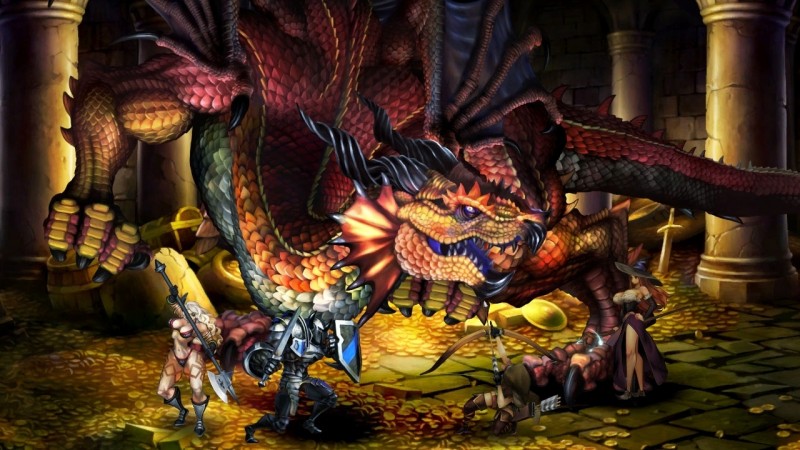 Bosses take up the whole screen and are challenging.

Once returned to town, you can turn in your completed side quests to gain experience and skill points. The skills are a bit underwhelming, and it can take a while before you start to really feel powerful. For the more skillful classes like the sorceress and elf, skills have more of a meaningful impact because I was quite bored with what my fighter class had to offer. The cash you earn as well doesn’t feel that important because there isn’t any equipment to buy — only potions and magic scrolls. The loot you find has to be appraised in order to use it, but the amount is so minuscule that it makes gold feel like an unnecessary addition to the game.

A rather interesting addition to the game — but ultimately clunky — is the use of runes. Throughout the stages are little rune letters that can be clicked on along with a set of runes you have to trigger different things like opening a secret door or buffing your team with increased strength. It’s a great idea in concept, but in execution, the controls for it are clunky. You’re forced to use the right analog stick as a pointer to move around the screen, but with three other people jumping around and moving the screen, it can be frustrating trying to click on runes. It feels like the game was designed around the Vita first because I imagine it is much more intuitive on a touch screen. 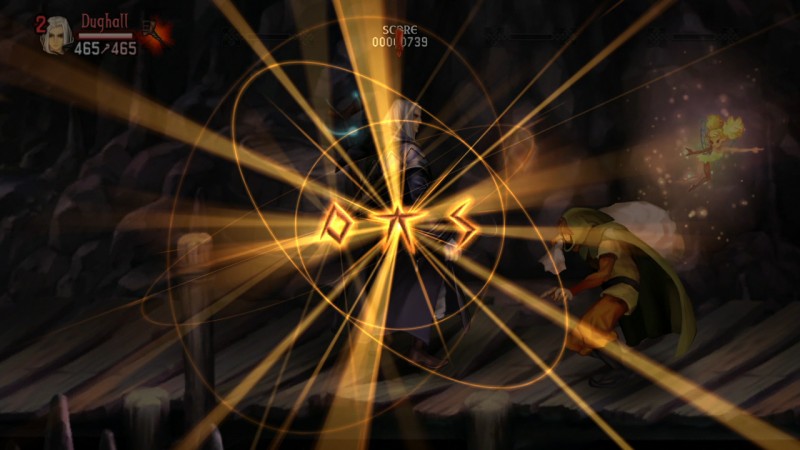 Using runes can buff your whole team or uncover secrets.

Once the primary playthrough is completed, your quest can continue on to two more harder modes where monsters are much tougher but more rewarding. I found no reason to continue to play as the game play started to get stale towards the end of the game. While it may innovate on the beat-’em-up genre, the core of the mechanics that make the genre shallow are still there. That said, it’s fantastic how much there still is to do after the game’s completion if you still want more Dragon’s Crown.

When it comes down to it, Dragon’s Crown is very much a disappointment. There is so much potential with the formula the developers at Vanillaware have created. While the art style is indeed ridiculous yet beautiful, the story behind the game falls flat and intrusive. The fact that there are only nine areas with two paths along with only a single town feels incredibly shortsighted. Certain classes feel more thought out than others, and the idea of working as a team with other people never really comes to light because everyone just hacks and slashes through the stages. Coupled with the fact that the game is $50 on PS3 or $40 on PS Vita, it is disappointing to see that the overall package isn’t very substantial. For that price, I don’t think Dragon’s Crown is worth it. However, it’s still very much enjoyable, but it’s a shame to think what a few more months of development time could’ve added to the game.