Geometry Wars³: Dimensions is a lot like the stepdad who comes into your life after your mom remarries; he’s adequate, but he never quite feels like your real dad. Sierra taking over the Geometry Wars series from the dead clutches of Bizarre Creations is a seemingly smooth transition, but there are a few key missteps that hold back Geometry Wars³: Dimensions from being a true Geometry Wars experience. Still, there are a lot of new ideas here that feel like a great addition to a series that had been falling a bit stagnant.

Geometry Wars has always been about high-intensity, twin-stick, shooting action, and Geometry Wars³: Dimensions continues the pace in that regard. If you’ve played a Geometry Wars game before, you’ll be able to get right in and shoot shapes in no time. For those unfamiliar with how the series works, you control a ship, shoot evil shapes that get in your way, pick up “geoms” to increase your score multiplier and repeat to get the highest score possible. It’s simple and addictive, and it scratches that arcade itch quite well.

The most notable change compared to its predecessors is the graphic overhaul. The static neon colored shapes are now vibrant and fully 3D. I’m a bit indifferent to the change because I quite liked the simple yet beautiful setup in previous Geometry Wars games, but there’s no denying that Geometry Wars³: Dimensions is outright pretty.

The graphics of Geometry Wars³: Dimensions have evolved with its game play.

Geometry Wars³: Dimensions oddly borrows a lot of its main mechanics from the Nintendo Wii game that nobody played called Geometry Wars: Galaxies. There’s an adventure mode that contains 50 missions of varying difficulty, level design and game type. Some may have you try to rack up a high score without shooting, while others test your skill to get the highest score in a time limit. Each level has a three-star scoring system in which you have to hit a certain score threshold to get the stars. I quite like this system because it turns every level into its own unique little game mode. It also increases the longevity of the game because you want to hit three stars for each level, which is incredibly difficult and time consuming.

Alongside your main ship is a handy little drone that can offer assistance in many different ways at your choosing, such as additional firepower, collecting geoms and smashing nearby enemies. Along with your choice of drone is what’s called a Super, which causes your drone to launch a special attack, such as dropping mines or turning into a freestanding turret. These are often one-time attacks that can really help out when in a tight situation. Both the drones and Supers are upgradable using geoms that you collect when playing. Returning from past Geometry Wars games is the simple smart bomb, which decimates everything on the level if you’re in a real pinch.

What choice of drone and Super you bring along with you makes a huge impact on the type of level and game mode you’re playing. Every level has a different layout, ranging from simple 2D squares to fully 3D spheres. If you’re fighting tons of waves of enemies on a smaller stage, then having the attack drone will be more beneficial than the collecting drone. The biggest success that Geometry Wars³: Dimensions brings is that it gives the series a great single-player offering other than just shooting for a high score over and over in a single game mode. The progression of upgrading and unlocking drones and Supers is executed well, and this encourages multiple plays of each level to see which combination works best. 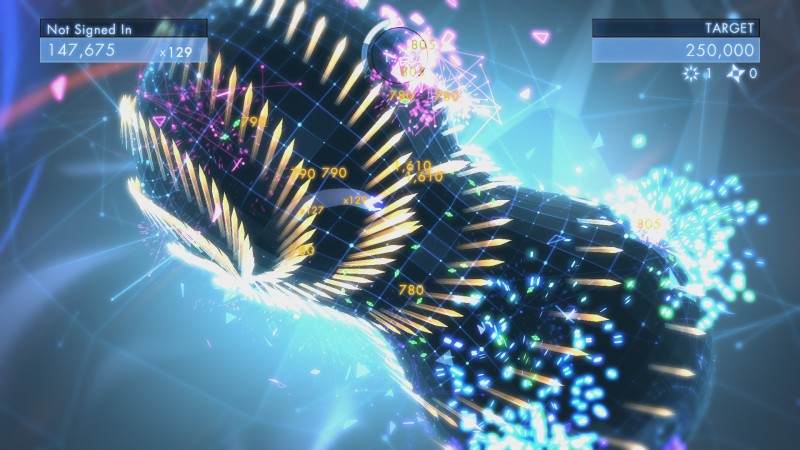 That isn’t to say that there aren’t a myriad of problems with Geometry Wars³: Dimensions. While the idea of fully 3D levels sounds interesting, it’s absolutely terrible for the Geometry Wars formula. In previous games, it was always about clarity. You always knew where you were and the dangers around you. These small 3D levels destroy any clarity. It’s incredibly difficult to know from where enemies are coming, which results in unfair deaths just from running into something that you can’t see.

The worst offenders are the cube-like levels, which are so badly designed that I can’t fathom how they made it into the game. On the sphere levels, you can see a small amount ahead of you, but there is almost no vision of what’s on the other side of the cube you are heading to because the camera only moves when you change over to a new side. These oversights in level design lead to countless deaths and countless expletives being shouted by me.

This wouldn’t be a problem if these types of levels were sparse in number, but nearly every level has some sort of 3D gimmick. In previous Geometry Wars games, if I ever died, it was because of my own mistake. In Geometry Wars³: Dimensions, it feels far too often that I died by something out of my control. This would be fine, but for some reason, they only give you one life on most levels. The main game type Evolved in previous games always gave you multiple lives to compensate for mistakes, but that courtesy isn’t here in Geometry Wars³: Dimensions. 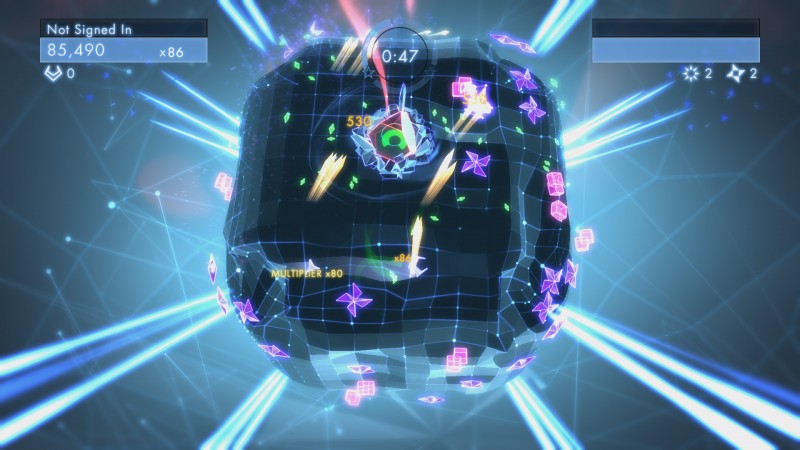 The cube levels are far too punishing to ever be enjoyable.

Outside of the main adventure mode are the classic modes Evolved, Waves, Deadline, King and Pacifism. It’s basically a port of Geometry Wars: Retro Evolved 2 with the new graphics, which is a pretty great value if you prefer the more pure Geometry Wars experience. I would have liked to have seen these modes with the drones added in so that I could play on just a regular old 2D square, but I understand why they didn’t design the game this way. There are also local and online co-op modes, but the game never feels quite right for multiple players given the amount of chaos that can go on in a match.

For the first time behind the franchise, I have to commend Sierra for changing up the formula and putting out a solid product. I also have to question their intelligence of game design for much of the level design and unfairness that plagues an otherwise fantastic game. The variety of game types, weapons and progression is a much-needed breath of fresh air for the franchise. When the levels aren’t terribly intrusive, Geometry Wars³: Dimensions is undeniably awesome and addictive as you reach for that high score over and over.