MTV and Harmonix, the makers of the highly successful game series Rock Band, have finally figured out the biggest reality in their market segment—that is that they were the biggest logjam to taking this concept to the stratosphere. 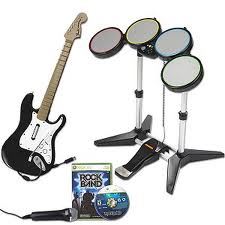 In my post of just over a year ago called, It’s Time For A New Music Standard, I pointed out that these games needed to open up their architecture so that the bands themselves could be given the option of creating their own Rock Band and Guitar Hero tracks. It seems obvious to me that once that happened you’d have bands all over the world wanting to get their own music into the game as soon as possible. Only the most anal-retentive (and vision-less) band leaders would pass up such an opportunity. I’d buy a CD all over again if it came with digitally remastered audio tracks AND included tracks for these games.

While that seems to still be a ways off the companies behind Rock Band have just announced that, later this year, they’re finally making it possible for any band to create note charts for each instrument in the game from their own master-track recordings. This is going to catch on fire pretty fast once everyone gets over the learning curve. I can see an entire cottage industry cropping up of development houses that specialize in creating these note charts, for a fee, for any willing bands.

The bands can price the songs from .50 to $3.00 and get 30% of the take which is a ton more money than they get from their own CD sales (at least any of the bands that have standard recording contracts with major labels).

It won’t happen soon enough for me. Suddenly I can see a deluge of content on the horizon instead of the slow trickle of widely varying bands and music types we have now. Yes!