I’m playing Lee Sin, moving towards the middle lane, when I see a team fight break out. The enemy Katarina jumps on our Varus, and I Safeguard to him to protect him. Kat starts to use her skills, and I Sonic Wave her, followed up with a massive kick and a Resonating Strike to kill her. The rest of the enemy team gets cleaned up, and we push toward the middle inhibitor. A wave of euphoria comes over me. I went into a team fight with a plan and executed it perfectly, resulting in success. It’s a feeling that is rarely ever emulated by any other competitive game, and it’s why I love League of Legends.

The complicated, elegant nature of the standard Multiplayer Online Battle Arena genre has been copied many times since the original Defense of the Ancients mod for Warcraft III, but it’s League of Legends that has struck a chord with me. I’d say about 50% of my free time is devoted to League of Legends in some manner, whether it be playing, reading patch updates or watching professionals duke it out. Sure, I play other video games quite a bit, but for the last two years, League of Legends has always been my go-to game when nothing else is cutting it. Why am I so infatuated with it compared to other games? Well, essentially, it’s the variety and provocative, competitive nature of its mechanics. 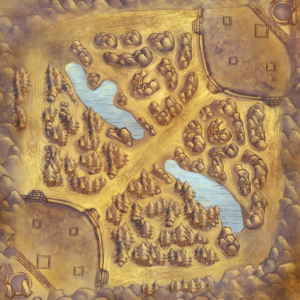 For those who aren’t familiar with League of Legends, it’s a five-on-five team game where you control a single champion with four different spells to use. You try to kill computer-controlled minions that barrel down three different lanes on the map that have turrets for each side leading to each other’s base. You want to destroy the turrets to progress to the base and kill the enemy’s nexus to end the game. Killing minions and enemy champions give you gold to purchase items to become stronger. Objectives are all around the map — like the super-tough Baron that gives tons of gold to the team who kills it as well as a buff that strengthens your team. These are just the basics, but underlying them is a whole depth of knowledge, strategy and skill to best your opponents for victory.

League of Legends is an ever-evolving machine of a game. It started out with only 40 champions when it first launched over three years ago, but since then, the champion pool has increased up to an absurd 116. What this means is that there is always new information to understand. Because of the staggering amount of knowledge needed to understand to be the best, it ensures a high-skill ceiling. Some may criticize League of Legends as being a casual game, and they’re partly right because the mechanical skill needed isn’t as high as something like StarCraft II. What a lot of people don’t get is that League of Legends is an intelligently crafted competitive simulation in more than just mechanics.

Let’s look at other types of competitive games. Call of Duty consists of pretty simple mechanics: find someone, shoot them and coordinate with your team to make sure you stick together for objectives. Because of auto-aim, the inconsistency of spawn points and shaky balance in terms of guns and perks, the skill ceiling is low and allows for anyone to really be decent at the game.

StarCraft II is the complete opposite of the spectrum. The skill ceiling is absolutely unattainable unless you’re a programmed computer. Mechanics mean everything here, with a healthy dose of some strategy on the side to outsmart opponents. The amount of multitasking required to even be okay at StarCraft II is unparalleled to any other game. It’s interesting to watch competitive StarCraft II players, but eventually, strategies become stagnant and even playing the game becomes more stressful than enjoyable.

League of Legends strikes a balance between these two. There are substantial mechanical skills needed in order to assert yourself as better than someone, but the basics are generally easy to understand. It is the aspect of teamwork that sets it far and above other games, and only rivaled by its genre competitor Dota 2. The fact that teamwork is so important compared to other games has created a stigma for itself in how toxic players treat each other.

I love the focus of teamwork. The coordination between others creates an incredible feeling of satisfaction when you successfully pull off a kill or secure an objective. I think that’s why I enjoy playing in the bottom lane more than any other role. For those who don’t know, the meta in League of Legends consists of a single top lane and mid-lane champion, a bottom lane with a glass cannon attack damage dealer and a support, with a jungler in between the lanes to help. While the other roles are generally solo experiences, bottom lane always requires communication with another person. When things are going right, nothing feels better than having your teammate simply say “gj,” or “good job.” It’s a small gesture, but compared to other competitive games, that kind of recognition and enthusiasm for teamwork are rare. 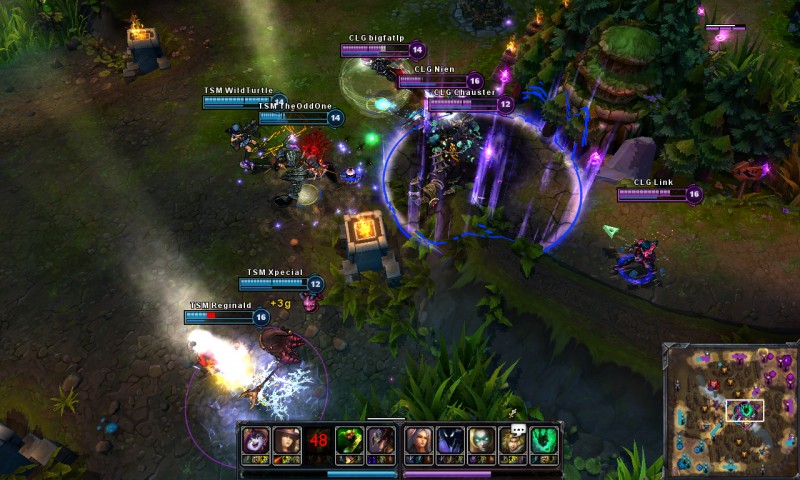 A cacophony of spells and abilities have to be properly executed in a hectic team fight.

Of course, with five different roles to play in League of Legends, there is always more to learn. There has never been a point in my lengthy League of Legends career that I have felt perfect with any one champion or any role. There are room to improve and new things to learn.

Let’s say you’re playing in the middle lane, usually given to mage-like characters. Because there is a large number of champions to pick from, your one champion has different match-ups depending on the enemy middle lane champion. You have to be aware of the enemy champion’s limitations, power spikes and all of the nuances of his spells to outsmart him. Additionally, there is strategy required in equipping your champion with the multitude of items to adapt to not only their specific champions but also to how they’re building their champions themselves. There is a certain level of satisfaction that comes from these 1v1 matchups in the solo lanes. When you take into account the enemy’s build, damage potential and cooldowns on spells and then apply that knowledge to help yourself outplay the opponent, it’s a similar feeling to dunking over someone in basketball. It feels empowering, invigorating and something a simple nerd like me rarely gets to experience.

If you don’t want the stressful environment of competitive ranked matches, there are other modes to play than the standard map. There are a specific 3v3 map for a smaller experience, an ARAM mode that pits two teams of randomly picked champions to battle across a single bridge and Dominion, which revolves around capturing control points and is generally much faster. While they are all supplemental to the main League of Legends experience, it is still refreshing to relax and play champions or try new things in the other modes. 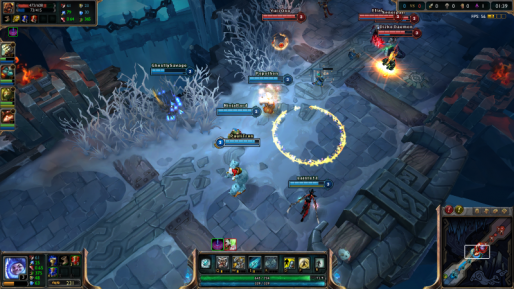 What really helps transform League of Legends into the best experience possible is the addition of friends. Some of the most fun I’ve ever had playing video games is hopping on League of Legends with four friends, chatting on Skype and maybe adding a couple beers for some definite hilarious shenanigans in the game. For more serious games, the level of communication and strategy becomes further elevated into a realm unseen in other competitive games. You’re constantly talking about the position of the enemies, comparing the timing of cooldowns for spells and objectives and debating about where to strike next. Winning a game playing with random people certainly has an exhilarating feeling, but when you’re communicating with people you know, executing a plan to achieve victory is like the sweetest nectar in all the land.

If you really want to make yourself unique among others, there is a vast array of skins that you can purchase for your favorite champions. The amount of personality that can be emoted from just a skin is truly awesome — for lack of a better word. There are even sets of skins for champions, like the wildly fun Pool Party skins that turn the fearsome crocodile Renekton into a lifeguard or equip the gun-toting Graves with a water gun. What is appreciative about the skins is that they offer no strategic advantage like some other free-to-play games. It can sometimes be a problem with free-to-play games that they become pay-to-win, but with League of Legends, some of the earliest and cheapest champions are still used in competitive play. 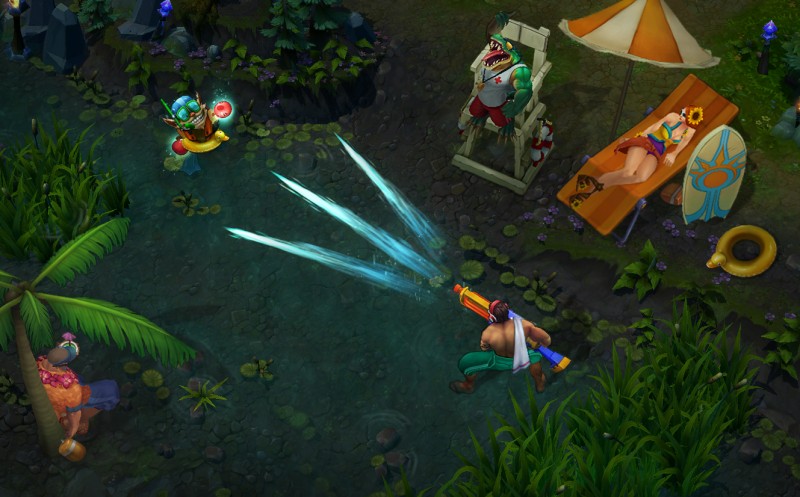 Skins like the Pool Party set spruce up your champion in a fun way.

However, when I’m not playing League of Legends, I’m usually engaged in something related to it. You know how most people gather around their TVs every Sunday to watch the NFL? Well, I do that, but it’s every Thursday through Sunday night for a couple of hours to watch the League Championship Series (LCS). Riot has pumped oodles of money into creating an articulated professional scene in both North America and Europe. They not only put on a show with professional ‘casters and analyzers, but they even pay the players involved in the eight teams in the league upwards of $12,500. Insane, right?

I can’t stop watching. Just like with people watching basketball, invested in their favorite teams and watching the best, I love to watch my favorite LCS teams. The excitement from the ‘casters as the action escalates and tension builds is positively thrilling. I follow all my favorite players on Twitter, watch them stream their practice ranked games from their houses and stay up to date with all the latest news about teams trading players and such. This thing is real.

This is more than just a phenomenon. This is more than just myself spilling my heart out why I love this game. League of Legends has become an entity to be engrossed with and be taken seriously. The amount of care Riot puts into this game is unparalleled by any other game developer. The continuous updates and addition of champions, the extensive and international professional scene and the camaraderie of playing with others all add up to something extravagant.

The competitive structure of its game play mechanics and the depth and variety behind every single match make League of Legends stand above other games. I can’t imagine when I’ll get bored with this free-to-play game, which is funny to say considering that I’ve spent close to $200 on it. For now, all I know is that I don’t want to stop. The laughs and happiness evoked from winning close matches and the cheering and yelling while watching my favorite team in a tournament — these feelings are rare among competitive games. League of Legends is the only one that I truly appreciate and love the most.