Every so often, I like to make an impulse buy on a game that has little to no media coverage, just to see if I can find a hidden gem. That impulse ended up being Lowglow. It seemed like it had an interesting art style and puzzle mechanics, so I dove right in. What I found was something with a lot of potential, but not quite hitting the mark.

Lowglow is a puzzle game with a simple concept — draw lines to create bumpers to try to lead a ball to the goal, all engrossed by a soothing art style and soundtrack. You only get a certain number of lines per level, so the placement of them is the crux of the puzzle element. At first, I wasn’t really sold. The levels were far too easy to complete. Far too often, it felt like I didn’t really put the lines in the right places to make it to the goal, but I was rather just getting sort of lucky. It didn’t have that “Eureka!” moment for which great puzzle games are known.

As I progressed, Lowglow started throwing new mechanics in the way of the goals. Different colored obstacles can flip the gravity of the ball, and portals start showing up. They teleport the ball to another location. I really had to rack my brain on a few of these levels to figure out how to make proper use of all of the objects. I enjoyed the fact that almost every level could be beat in a multitude of different ways. Still, I would too often just get lucky with a ball’s crazy bounce putting it in the goal. 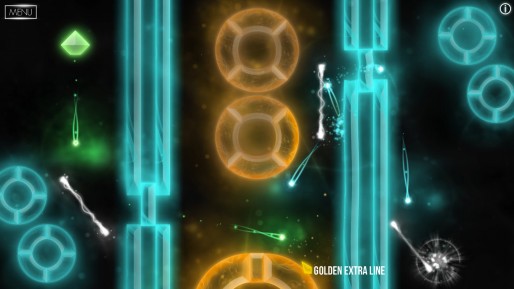 The different colored shapes apply gravity modifiers to the ball.

I was also disappointed with how the levels are structured. Most levels only allow you to use a few lines, which can then lead to levels ending fairly quickly. I hoped for more extravagant level designs to shoot and bounce the ball all over the place to victory. It all felt very small scale. Luckily, after beating the game, loads of more levels show up, and most of these have more interesting level designs than the bulk of the main story.

Actually, calling it a “story” would be giving it too much justice. Lowglow tries to shoehorn a story into an abstract puzzle game, and every bit of it feels unnecessary. The story comes in the form of floating disfigured faces spouting exposition about bringing light to the darkness. Weird jokes and informal lingo are wedged in as well, which clashes with the serious bits of exposition. In a game that is all about solving puzzles with bouncing balls, there is no reason for this mediocre story to be there. 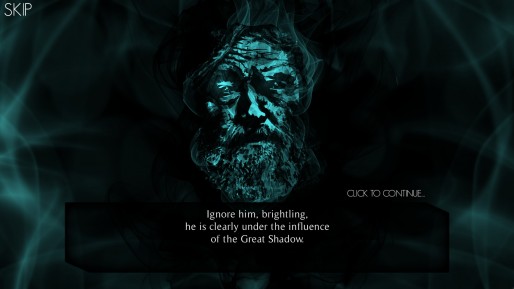 Why is this even in the game?

After the three or so hours it takes to beat all of the levels, there is nothing left to do. There isn’t any longevity in replaying the levels unless you want to see how many different ways that you can beat them, but I didn’t have any desire for that. There is promise of a forthcoming level editor, which would be wonderful for giving some life to the game as well as making levels that would be even better than those in the main game.

I don’t really have any strong feelings —positive or negative — about Lowglow. It is simply a game that exists to provide a few hours of mild enjoyment and then be forgotten when another game comes along. While interesting in concept, the puzzle mechanics only reach their highest form in about a third of the levels, with the rest feeling unsatisfying. I will say that it was nice to relax and enjoy the serene atmosphere of Lowglow and piddle around with some puzzles, even if it wasn’t extraordinary. For me, that was worth the $7 that I spent on Lowglow.

Lowglow is available for Windows PC and Mac formats.