The best way to explain Ori and the Blind Forest is that it’s a playable Hayao Miyazaki film. The world is brimming with personality and beauty. Environments are richly detailed and varied enough so that no two places feel similar. Packed in each area are loads of secrets to discover and enemies to be blasted with light. After the prologue, Ori is left to explore and restore the forest that has been attacked by dark spirits. 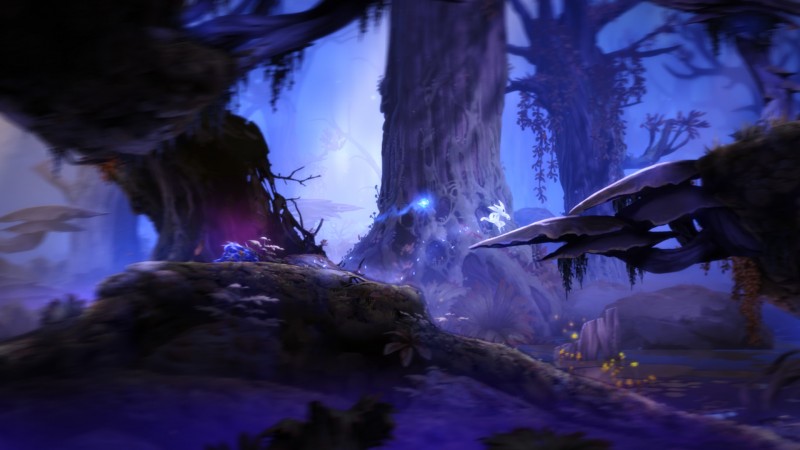 Ori and the Blind Forest is absolutely stunning to look at.

Ori and the Blind Forest is primarily a platform game with some moments of battle spattered throughout. Seeing how beautiful the game was at face value, I did not expect how downright amazing it felt to play. Ori’s strongest attribute is her movement. She dashes and jumps around with very tight controls; I never felt like I wasn’t in control of her movement. Along with Ori’s acrobatics is her little light-friend’s attack power, which basically consists of mashing a button next to an enemy. I wish that the combat in the game was more substantial, but because it isn’t a prevalent aspect of the game play, it never detracted from the experience.

As you progress through the story, Ori slowly learns new powers, similar to something like Super Metroid, as well as additional abilities that are granted in a skill tree such as increased attack damage. These new powers she learns are all tied to movement, like double jumping or climbing up walls. The most unique power is the ability to propel yourself off enemies and projectiles. I hadn’t ever played with such mechanics before in a game, but Ori and the Blind Forest made it feel completely natural. Bouncing around areas you previously had to slog through was liberating. All tied together, the movement mechanics mesh incredibly well because of the tight controls and allow for Ori and the Blind Forest to be played as quickly as you are skilled. 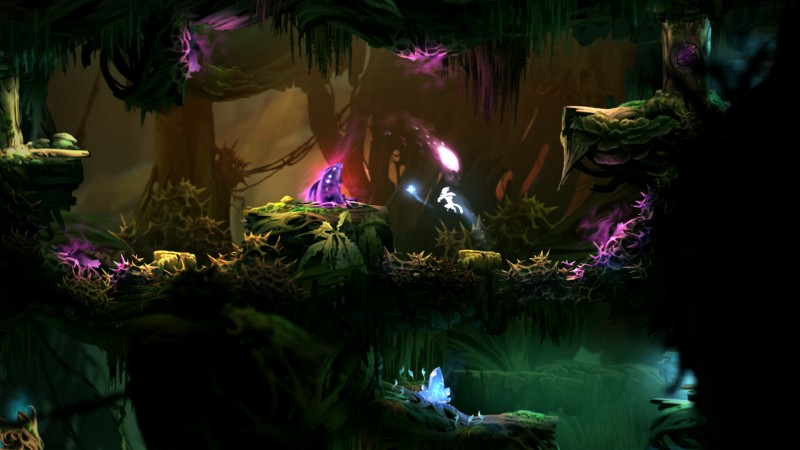 The varied maneuverability makes Ori and the Blind Forest a joy to play.

Where Ori and the Blind Forest succeeds most is when the production values seep into the game play. Getting the ability to double-jump felt like a weight lifted off my shoulders. The feelings were met with appropriately uplifting, whimsical music and level design that felt fast and fluid. In fact, most of Ori’s story is told with very little dialogue. The fantastic animations, art style and music all combine together with the game play to create dozens of wonderful little moments that feel executed almost effortlessly.

Don’t be fooled by the cartoon art, though. Ori and the Blind Forest pulls no punches and expects you to respect and adapt to the unique movement options. Complicated levels are thrown your way constantly, requiring you to wall-jump, climb, propel off projectiles and attack enemies with precision. What helps to alleviate the difficulty is the brilliant design of creating your own checkpoints with collectible energy. Almost anywhere can be a spot for a checkpoint, so you’re never stuck in one place for very long. It all feeds into the overarching design of the game to be fast and fluid. 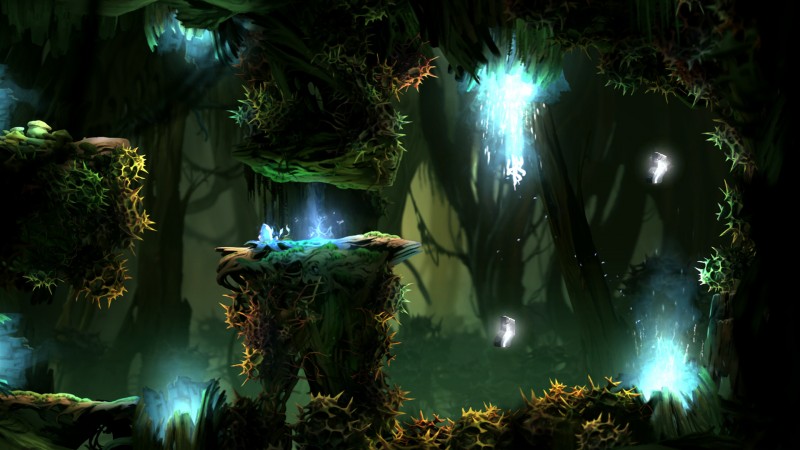 The levels are designed brilliantly, but they’re still challenging.

There were only a few moments where I didn’t particularly enjoy Ori and the Blind Forest, and it’s where it drops the checkpoint system. In three sections of the game, you’re required to complete these insane series of platforming challenges in quick succession, or you’re forced to restart from the beginning. They’re not long. In any other game, I wouldn’t have a problem, but it goes against what the player has learned by creating his own checkpoints and playing at his own pace. They’re also plagued with trial-and-error scenarios where it’s almost impossible to know what is coming next — usually an instant-death spike. It’s a shame because these portions are incredibly invigorating visually and thematically for the story.

Ori and the Blind Forest doesn’t outstay its welcome, either. It feels appropriately designed at around five to eight hours based on how skilled you are. It’s paced well so that you’re never bored. There’s also a good amount of exploring to do throughout the forest because all of the areas are connected. Health and energy power-ups are hidden behind some movement mechanics that you may discover later in the game. It has that addictive nature of any good Metroidvania where you want to go back to previous areas to explore again. Because the movement set is continually expanded upon, traveling around the world becomes increasingly more fun, and my concern over an absent fast-travel system was quickly dissipated.

I loved almost every minute of Ori and the Blind Forest. From the emotional prologue to the satisfying conclusion, it’s packed with some of the best platform game design that I’ve seen in years. The movement is fast and fluid, and the difficulty is offset by the smart checkpoint system to allow for an extremely rewarding experience. Everything is wrapped up nicely in incredible animation, art and music that appropriately emulates the current style of play. I didn’t expect much going into Ori and the Blind Forest, and what I got was nothing short of extraordinary.

Ori and the Blind Forest is available via download for Xbox One and Windows PC systems.