An interesting part of my reviews is that I often write them after the game has been released. This means that I get to see the critical and public reception as I’m playing that specific game and leverage my opinion with those viewpoints. For Ratchet & Clank, not a negative peep was made about it, with universally positive reception filling the air. Fast-forward to my completion of Ratchet & Clank, and I’m absolutely puzzled by how well it was received. It feels like a game that was designed as quickly as possible to push sales of the upcoming movie. Ratchet & Clank has an amalgamation of a story, recycled weapons and combat that plays so loose that it’s hard to enjoy.

Ratchet & Clank is a reimagining of the original game that was released for the PlayStation 2. It comes packed with a new graphical flourish, streamlining of levels, a weapon upgrade system and other little quality-of-life changes. The story this time around is a retelling of the events that happened in the original game but told by the still-unfunny Captain Qwark. The characters have their classic sense of charm, but most of the humor feels like cheap jokes that younger kids would have a laugh at. Between game play sequences are cinematics ripped straight from the movie with context often missing. There is little effort in developing the characters so that I care about what I’m doing in that world. I see a lot of comparisons to the Pixar movies, but Ratchet & Clank doesn’t even come close because of a distinct lack of subtlety. 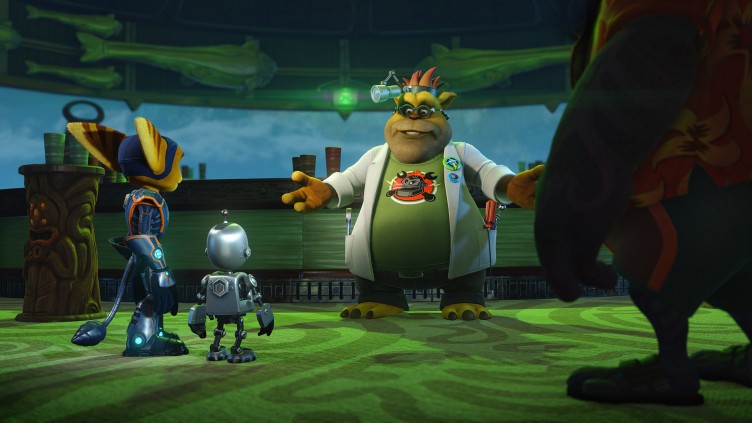 The story and characters feel poorly fleshed out.

Ratchet quickly comes into contact with Clank at the beginning, and their adventure begins. You immediately come into contact with some guns and doodads to destroy countless numbers of baddies. The best thing that Ratchet & Clank pulls off is how well it’s paced. Sections of combat are interspersed between sections of platforming in a way that it never becomes stale because of the number of gadgets introduced. In one world, you could be flying around in a jetpack, while in another, you might grind on rails. While the depth of these situations is rather shallow, the pace at which new gimmicks are offered almost makes up for it.

On the other hand, the combat sections are painfully boring despite there being a good number of wacky guns to use. Enemies fall into three categories: weak melee guys, medium-strength guys with guns and big guys with heavy weapons. The tactic for beating all three is always the same — use the few weapons that you have upgraded and blast them away with no challenge. Guns are so overpowered that very rarely did I have to stop to think which specific gun that I should use for that situation.  While there are about a dozen guns to use, many of them overlap with each other. Why would I use the flamethrower when the Pixelizer does the same job much better? It’s not as if there aren’t large numbers of ammo boxes and vendors around to constantly restock your favorite guns. Furthermore, putting a lot of points into your mostly used guns means that you’ll have less viable weapons to battle the tougher enemies later in the game.

The weapon upgrade system is a good idea, though. The more you use a weapon, the more experience it gains. As it levels up, you can put in skill points that increases certain attributes for that weapon. It feels awesome to have my weapons slowly grow more and more powerful, but at the same time, the combat is so poorly designed that the upgrades just make it increasingly less challenging. I’m not saying that Ratchet & Clank has to be insanely difficult, but designers should instead implement interesting situations that call for different uses of guns. 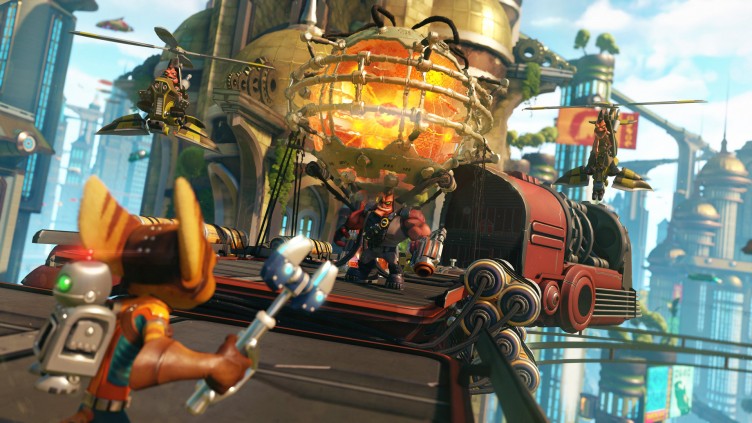 One of the most talked about aspects of Ratchet & Clank among critics has been the graphical fidelity, mostly for good reason. Ratchet & Clank does indeed look pretty nice. Where it lost me was the frame rate cap being 30 frames per second. Amidst the chaos of bullets and explosions and the flurries of nuts and bolts, the low frame rate muddles it all together. It’s a shame that more emphasis was on lighting and textures instead of providing a smoother experience at 60 frames per second, especially considering that the cartoonish art style allows for it.

Ratchet & Clank is interesting because it’s a mascot platformer/shooter from 2002 brought to the modern age of gaming with some tweaks while still maintaining that old-school feel. The problem is that old-school feel doesn’t quite hold up, despite some nice additions like the weapon upgrade system and better controls. While the pacing of new gimmicks is great, the numerous combat sections coupled with bad gun design create shallow, frictionless game play that consistently bored me. The rotten cherry on the top is the lack of development of the characters and story for which little is done to make you care about them. Maybe it was the fact that we haven’t had one of these types of games in a while that caused critics and the public to fall in love, or maybe I’m just a cynical asshole overly criticizing a children’s game. Either way, I think that this is something that the world and I will just have to disagree on.

Ratchet & Clank is available for PlayStation 4.