There is something undeniably satisfying about a game that can hook you for hours, itching for just one more run or level. Rogue Legacy so easily sinks its teeth into you because of its mash-up of genres that span from roguelike games to Castlevania to RPGs. The game has a few faults because of its small budget and development team, but ultimately, it executes its formula in a manner unlike much else. Rouge Legacy is 2013’s first big surprise hit.

As said previously, it combines roguelike qualities with Castlevania combat and exploration. You play as a knight that enters a giant castle that is randomly generated each time you enter, and the end goal is to defeat the four bosses placed around the castle. What this means is that you’ll die quite a bit to the treacherous monsters that stalk the castle’s corridors. However, you’ll respawn as a new descendent of your ancestor who previously went through the castle but as a new character class with different traits. 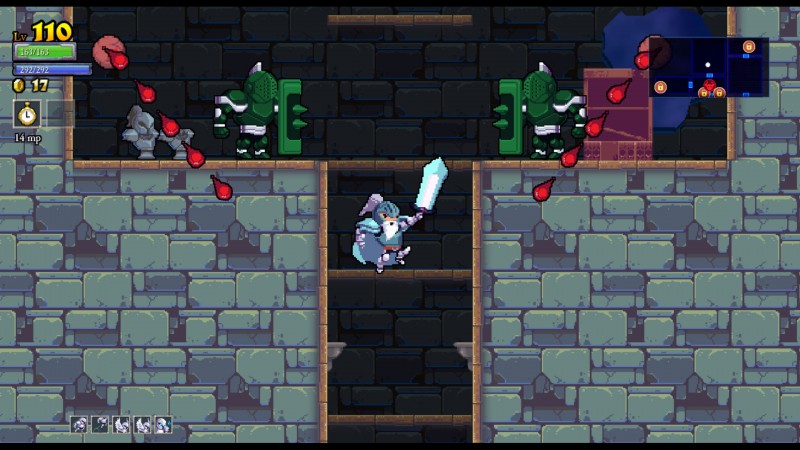 Enemies start to beef up toward the end of the game.

These traits are mildly humorous with things like irritable bowel syndrome, which makes you fart uncontrollably, or more useful ones like OCD, which gives you mana when you attack furniture or enemies. Along with the traits are character classes like a tanky barbarian or a powerful archmage. The variety of choices give the game a fun twist that allows for each run to be a bit more unique than the last. Eventually, you must die, and with each death, rewards are to be reaped.

Each time you explore the castle, you find and collect money. After each death, the money you collected can then be spent on upgrades, equipment or runes. Upgrades simply consist of increasing character stats like health or attack damage or unlocking new character classes. Also, randomly generated are loot drops for equipment blueprints, which can then be bought from the blacksmith. Lastly, runes can be bought that alter your equipment to give you an edge in combat with abilities like double-jumping or getting more money from monsters.

While the game may start out frustrating because you’re very weak, it is the continuous sense of progression that makes the game so addictive. Consistently getting farther and farther in the castle while killing enemies more quickly is the crutch in Rogue Legacy’s satiating formula. While much of your progress can be based off the luck of the castle, learning the enemies’ moves and perfecting the combat will let more skillful players succeed more often. 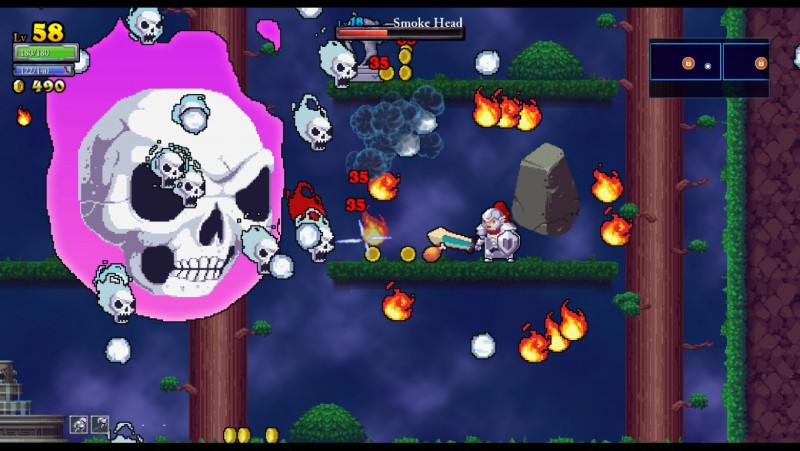 The knight takes on the fearsome Alexander skull boss.

The combat lends itself well to what the game is trying to do, which is create an addictive, quick 2D action side-scroller. However, some parts of the combat feel shallow. For example, the only unlockable weapons are all swords. It would’ve really been interesting to have different types of weapons that allow for different play styles. The enemies tend to be unvaried with the four bosses just being a more powerful variation of a typical enemy. There are about 20 different enemy types, each being rehashed and tougher by changing their attacks in the second half of the game. It feels a bit cheap, but at least the developer changed the way to approach the enemy rather than just being a switch in color. After completing the game once, a new game+ is opened up to continue your progress because there are a ton of upgrades to unlock. New game+ is significantly more challenging, but veterans who want to keep playing will continue to find enjoyment.

In the world today where great games are numerous and time is of the essence, I often only play a game for an hour or so before I get a bit tired or move on to something else. Rogue Legacy brought back the old school mentality of when I was a kid, playing for hours and telling myself I’d stop after one more run. There are a few criticisms — like a somewhat shallow combat system and horrifically repetitive music, but these are things that can be fixed in a sequel or even downloadable content. What is there is executed in such a fantastic manner that it’s easy to forgive the shortcomings.

Rogue Legacy is available for $15 for PC.