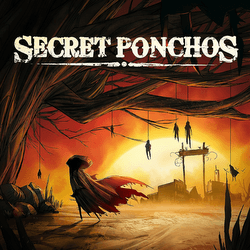 If there is one word to sum up Secret Ponchos, it would be “unfortunate.” It’s by no means a bad game. The overall concept of isometric western gun battles is great, and the core mechanics are sound. What’s unfortunate about Secret Ponchos are the outside factors and infrastructure flubs that taint an otherwise enjoyable experience.

Secret Ponchos is a multiplayer-centric, Western-styled shooter that’s all about quick reflexes and mastery of your character’s strengths. You can choose from ten different Outlaws, each possessing their own unique weapons and abilities. Typically, they come outfitted with a gun and a secondary, more utility-based weapon. Like you would with any twin-stick shooter, you move with the left stick, aim with the right stick and pump your foes full of lead. When the going gets tough, you can also roll or dash out of the way to evade fire. However, this uses limited stamina, so proper stamina management is key to surviving dangerous firefights.

These are essentially the core mechanics of Secret Ponchos, and they all mesh very well together once you get the hang of the controls. You constantly dash around, get shots off and measure how to advance on the enemy. It plays out a bit like controlled chaos with each team waiting for the right opportunity to pounce. Outsmarting the enemy and using your character’s abilities to the fullest feels really damn good. When your whole team is also on the same point, it feels even better. 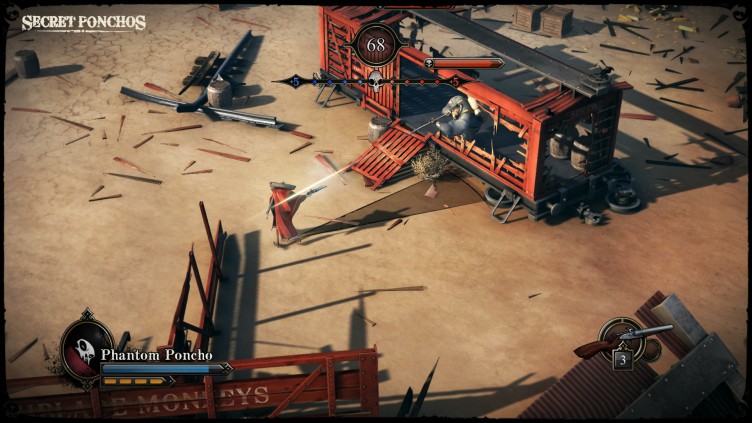 The gunplay is fast, frantic and rewarding.

Each Outlaw you pick can have his stats customized to your liking, such as increased health or rate of fire. This small amount of customization is enough to tweak how you want your particular character to play out. I particularly fell in love with the Deserter’s brutal capabilities of rolling over enemies to stun them and following up with a couple of blasts of shotgun shells. While the design of some of the characters is interesting, Secret Ponchos is missing a certain flair to really give the overall game some charm.

Unfortunately, the crisp game play is hindered by the overall package in which it’s implemented. There are very few game modes between the 1-vs-1 and 3-vs-3 offerings.  Most of the time, you’ll either play Domination, in which your team has to get five more kills than your opponents, or Deathmatch, which is split into three rounds with no respawns. I’d be mostly fine with the limted number of modes, but the kicker is that there are also a small number of maps as well. In the current landscape of multiplayer gaming experiences, it’s getting harder and harder to justify this little amount of content, even if it’s only $15. 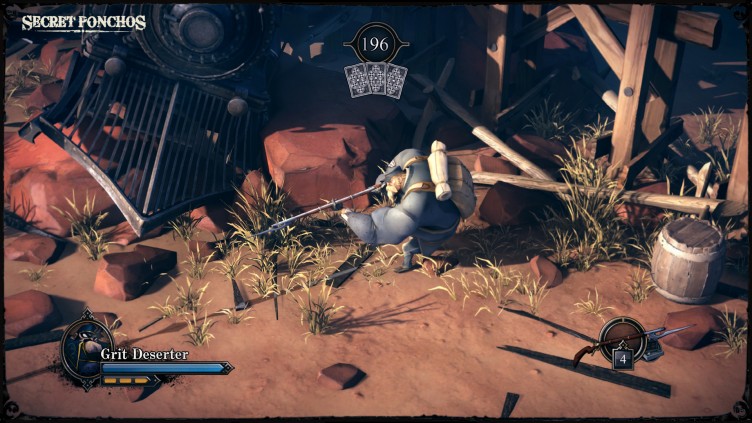 The Deserter packs a serious punch with his powerful buckshot.

The other inhibitor of fun in Secret Ponchos is the matchmaking system. It takes absurdly long to get into a game, with wait times up to five minutes sometimes. This problem is exacerbated by the fact that matches themselves are only around five minutes long. After each match, you can hit a button to regroup with the same people to shorten the wait time, but rarely do people pick it due to a poor user interface. It’s incredibly frustrating because the core of Secret Ponchos is playing quick, fast-paced matches, but it becomes slogged down by the poor matchmaking system.

There also seems to be missing some sort of progression system. That’s not to say that every multiplayer game needs some gimmicky leveling system to keep you arbitrarily hooked, but Secret Ponchos doesn’t have anything substantial to anticipate. If they really want me to get hooked, they should offer some cosmetic unlocks to customize my Outlaw or my weapons based on how high that Outlaw’s Bounty is. I could then feel some sort of attachment to my character. Instead, the developers dangle those cosmetic offerings behind a $9 paywall.

The total package of Secret Ponchos really pains me because the core game mechanics are rock solid. The fast-paced, skill-intensive shootouts mixed with unique and diverse Outlaws create intense and exciting moments. Unfortunately, it becomes bogged down by an overall lackluster multiplayer suite that had me spending more time in matchmaking menus instead of dodging gunfire in an old saloon. If Secret Ponchos had launched maybe a few years back or with a different pricing structure, we could be looking at a more healthy player base that would take care of some of these problems. As it stands, it’s caught in the classic catch-22 — nobody wants to play because of the low player count, and it has a low player count because nobody wants to get invested in a dying community. Unfortunate, indeed.

Secret Ponchos is available for Windows PC and PlayStation 4.