I wasn’t entirely sure what I was getting into when starting up Strider for the first time. There wasn’t much info, hype or chatter about it up to its release, and it doesn’t help that it’s a reimagining of an arcade game from the late 1980s. With the promise of “Metroidvania” mechanics and a return to classic side-scrolling action, my interest was piqued. What I ended up finding was an incredibly solid and fast-paced game that works well due to its supremely tight controls.

Speed and flow is the core of what makes Strider work. You’ll constantly sprint, jump and slash wherever you venture. At the start, futuristic ninja Strider only has his sword and acrobatics at his disposal to take out enemies who quickly fall with a couple of swipes. The brainless enemies don’t necessarily pose a threat but get increasingly more powerful throughout the game with different weaponry and defenses. Because Strider is so agile and able to kill enemies effortlessly, it’s remarkably satisfying to pull off kill sequences in quick succession that would make a true ninja proud.

What really complements the combat in Strider is how well he controls and moves. He’s fast and agile, able to jump and flip in smooth fashion. The controls feel tight and intuitive, which makes the lack of a tutorial all the more enjoyable when you can just pick up the controller and understand how to play. Strider is also able to climb any surface, allowing him to travel to pretty much wherever there is a wall to climb. This opens up the exploration to a ridiculous level because collectibles and power-ups can be hidden in all corners of the world. The exploration meshes well with the nonlinear level design because rooms often have multiple paths and hidden areas to search.

The main problem with the combat is the large number of enemies that are thrown at you that respawn when you leave and enter areas. There aren’t any experience points or rewards for killing enemies other than purely getting them out of your way. I would often just leap over enemies if I was just traversing the environments for collectibles, which feels odd considering how tight the combat plays. An incentive for killing enemies would’ve gone a long way for not only lengthening the game’s play time but also increasing the feeling of progression.

Occasionally, a boss fight will break out to try to stop Strider from whatever his motive is in this game, which isn’t exactly fleshed out. Anyone playing this game shouldn’t care. These boss fights are expertly crafted and test your deadly ninja skills as well as your intellect. They’re fast and frantic, with boss movements and patterns that need to be memorized to take advantage at the right opportunities for inflicting damage. Toward the end of the game, these strategies aren’t necessarily needed because the multiple health and damage upgrades you find allow for just pure brawn over brain. Of course, this strategy won’t work on the hard difficulty, but playing on normal difficulty made these seemingly epic fights turn into one-sided battles.

While the world encapsulating Strider isn’t exactly inspiring, the level of detail in the 2.5D environments is remarkable. It still plays in a 2D plane, but the environments are made to feel like you’re really engrossed due to the depth of field in the 3D plane. It’s unfortunate that the developers went for a more futuristic look without necessarily adding much to make it stand out, and choosing dystopian Russia as a backdrop certainly doesn’t help, either. Be prepared to see lots of gray colors. Occasionally, the grays will be contrasted by brighter colors, and these parts are far more memorable for it. Strider himself is well designed with strong neon colors. I just would’ve loved to see that art style translate more into the otherwise boring world. 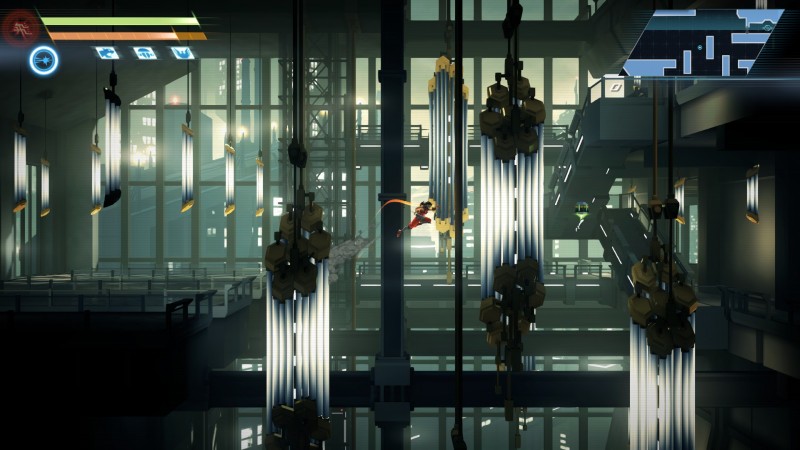 The locales in Strider are remarkably detailed, even if a bit dull in colorization.

Luckily, you don’t spend too much time observing the details of the world because you move quite quickly through the game while increasing Strider’s deadly capacity. Progressing through Strider means acquiring new skills and powers to help access new areas. These new areas can lead to power-ups, which allow Strider to have more weapons and special attacks to use against his foes. You never quite feel stagnant in your progress because these mechanics are introduced in quick succession. Acquiring new additions to your lethal dose of weapons also increases your ability to take out enemies in exciting ways. Throwable kunai can be turned into deadly bombs that stick to any surface, or you can augment them to heat-seek enemies. I loved having multiple ways to go about a certain situation based on the weapons at my disposal.

With new mechanics introduced at a steady rate, the “Metroidvania” aspects come to light with the ability to access previously unavailable areas. A fast revolving door can easily be entered once you pick up the frozen blade augmentation, and switches you couldn’t quite reach before can be hit with the aforementioned kunai. It’s always nice to find these instances of epiphany that lead to a reward in strengthening Strider, but the world design makes it difficult to reach previously explored areas. The map is convoluted, and there isn’t anything to inform you of how certain areas connect. I wanted to go back and explore areas I had been to, but with enemies constantly respawning and a confusing overworld, it felt more cumbersome than rewarding.

When the main story line is finished, which took me a paltry three hours with around a 55% completion, you can continue to explore the world and find all the collectibles. There are also supplementary challenge modes such as Beacon Run (where you try to get to the goal as quickly as possible) and Survival (where you fend off enemies thrown at you). They’re nice as a distraction, but as stand-alone experiences, they feel a bit too shallow to really care about.

In this day and age with hype building up around releases and preview coverage that’s abundant, it’s always nice to start up a game with relatively no expectations and come away pleasantly surprised. I’m a sucker for “Metroidvania” mechanics in games, and while Strider doesn’t do much in terms of innovation, it executes these ideas well with fast-paced game play and tight controls. It just feels incredibly solid to play. With Double Helix seemingly coming out of nowhere recently with their previous release of Killer Instinct and now Strider, it’s quite clear that they are a top-tier developer with some serious insight on how to make a great title.

Strider is available for the PlayStation 3, PlayStation 4, Xbox 360, Xbox One and Windows PCs.