I don’t have any nostalgia for the ’50s and ’60s B-movie scene where giant apes were animated with stop-motion techniques and scripts generally revolved around saving a damsel in distress. Despite this, I still thoroughly enjoyed the whimsical and fun game The Deadly Tower of Monsters. It plays to its stylistic strengths and brings enough creativity in the actual game mechanics to offer an experience that introduces itself, ramps up briskly and ends before it becomes tiring.

The Deadly Tower of Monsters is all about re-creating those wonder years of filmmaking where the special effects were laughably bad and every possible monster stereotype was created. You play as the heroic Dick Starspeed — you can already see what type of game we’re getting into — on a quest to save a planet from an evil emperor, fighting past copious numbers of monsters to get it done. The kicker is that, while you’re playing, the faux director makes commentary about interesting, yet fake, tidbits about certain scenes in the “movie” that you’re playing. He talks about how the robots you’re fighting were actually laboriously operated by people for hours on end with few or no breaks or how much money was spent on animating the giant dinosaurs. While some jokes can be a bit juvenile, more often than not, the commentary adds a unique feel to The Deadly Tower of Monsters. 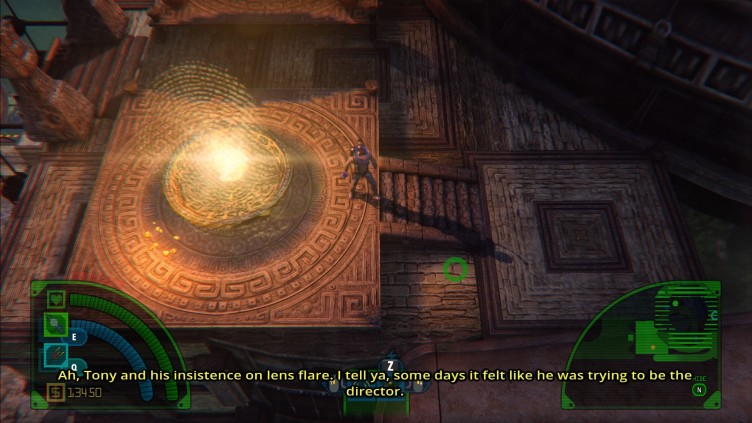 Clever commentary and visual flare give The Deadly Tower of Monsters a tongue-in-cheek feel.

Even if you’re not a fan of the B-movie era like myself, it’s hard not to admire the amount of respect that The Deadly Tower of Monsters gives to the film industry’s awkward teenage years. The screen is covered with a scratched, grainy filter; giant monsters are animated in a low frames-per-second rate to give a stop-motion animation look; and flying enemy bats have visible strings attached to them. There’s a certain level of love and care put in that creates a style that is striking yet endearing. The idea of a B-movie game seems bizarre, yet it is pulled off so well in The Deadly Tower of Monsters.

Luckily, it isn’t just style over substance. The Deadly Tower of Monsters is thankfully a competent game as well, playing as a an isometric action platformer. Dick is able to wield a melee weapon and a gun to fight the various monsters on the climb to the top of an enormous tower. The combat is simple but does throw some curveballs to shake things up, such as the Vertical Gun, which allows you to shoot over the edge of a platform upon ascending enemies. Most of the variety in the combat comes from the different weapon combinations that you can use as well as the absurd number of different monsters met on your way. Unique situations are thrown at you at a consistent pace, so the simplicity of the combat never feels grating. 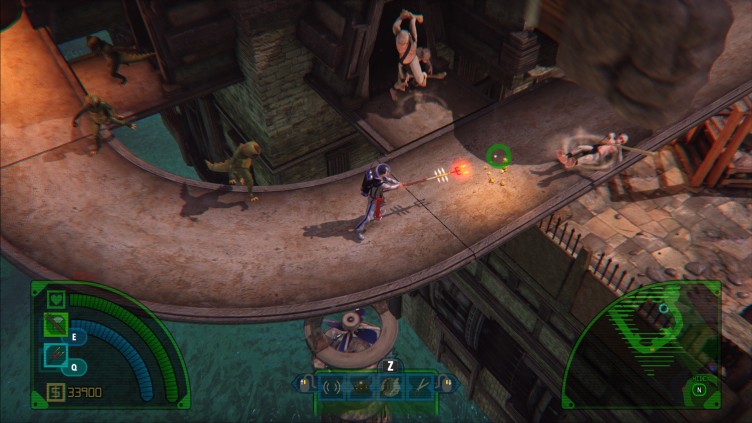 Monkeys, seamen and robots are just a few of the classic monsters that you face.

Perhaps the most interesting aspect of The Deadly Tower of Monsters is the “Tower” part of the name. At the beginning, you start on solid land and slowly progress up miles in the sky until you’re up in space. As you ascend the tower, you discover new powers that allow you to access news areas and secrets. Many of these areas are only accessed by jumping off the tower itself and free-falling through the air. These jumps are encouraged because of a power that you collect early on that teleports you back to the place from where you jumped. Most impressively, as you free-fall, you can see just about every obstacle that you overcame, all the way to the very ground.

This sense of verticality is something that I haven’t ever really seen before. I constantly peered over the edge to see how far that I had climbed as well as look for secret targets to shoot and Golden Cogs to collect to upgrade my gear. Because new powers are introduced constantly, it promotes going back to older areas, which in turn promotes the use of the fun free-falling mechanic. Climbing back up after a fall is easy because of teleporters that you discover throughout your climb.

The sense of scale and field of view are really impressive, especially for a game of this small caliber.

While exploration for secrets is encouraged, the upgrades for your gear don’t necessarily feel that empowering. Much of The Deadly Tower of Monsters is pretty easy to get through, and I didn’t feel particularly challenged at any point. In fact, the only points at which I did experience some sort of challenge were in trying to figure out if I would make a jump or not due to the wonky camera. There are also a fair number of bugs and awkward animations that can lead to some slightly frustrating deaths. Some may say it adds to the B-movie feel, but when it impacts player control, it’s a problem.

After about four hours or so, I was finished and satisfied with The Deadly Tower of Monsters, although much more time can be spent searching for every last secret. It introduced a unique concept in the constant ascension of the tower mixed with BASE jumping, all the while being coated in a tacky B-movie style. Even with the decent amount of jankiness, I can always appreciate when a video game comes out and gives me something that I’ve never experienced before. The Deadly Tower of Monsters delivers that in spades.

The Deadly Tower of Monsters is available for Windows PC and PlayStation 4.