Every console has a game that defines that console’s generation. The Nintendo 64 had Super Mario 64, the Xbox had Halo and the PlayStation 3 has The Last of Us. The PlayStation 3’s era will come to a close with the dawn of the PlayStation 4, and the console couldn’t have been sent off better than with The Last of Us. Naughty Dog has an impressive record with the Uncharted trilogy, and this time, they ventured into a new innovative property to again prove that they are one of the best developers in the industry.

The Last of Us takes place in a post-apocalyptic world that has been overtaken by a fungal disease that turns people into zombies. The concept and setting are admittedly unoriginal, but it is the story between the characters that separates itself from the rest of cookie-cutter zombie games. The story picks up 20 years after the outbreak of the infection and focuses on a character named Joel, a 50-something-year-old male who lost his only daughter in the pandemic. In a world devoid of law and order, a group of freedom fighters named the Fireflies give Joel an important task of escorting Ellie, a girl with a rare immunity, to their headquarters to manufacture a cure. 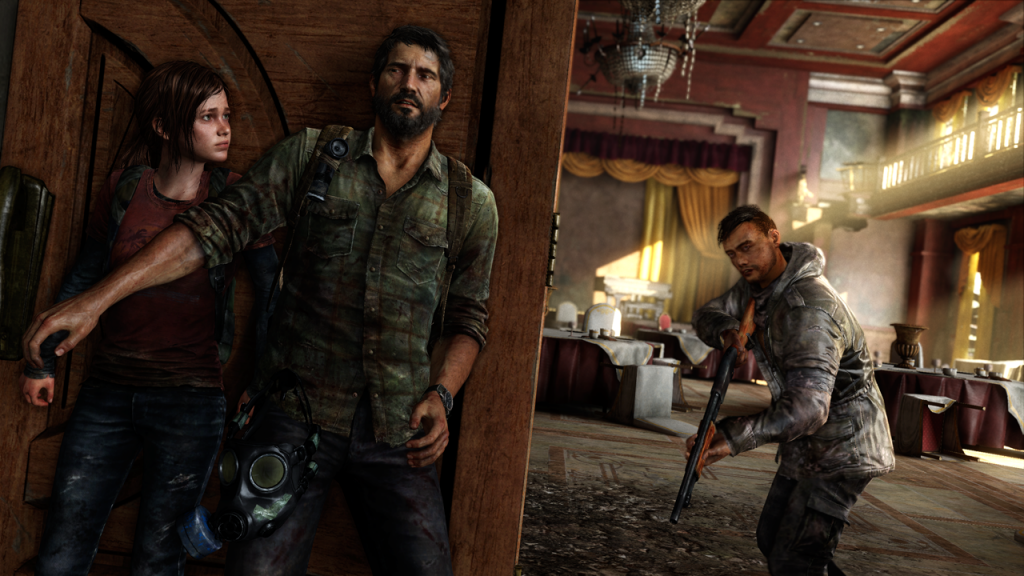 Joel and Ellie hiding from a hunter

For the majority of their journey, Joel is almost exclusively with Ellie. The result of the constant, intimate interaction between these two characters is something most games rarely achieve — characters the player actually cares about. The environment provided by the post-apocalyptic world allows for powerful and emotional situations because death lies around nearly every turn. Padded between these intense moments are subtle interactions between Joel and Ellie as they make small conversation about things you encounter.

What helps makes these small nuances more interesting is the dichotomy between the two characters. Joel has had the experience of life before the outbreak, but Ellie, being only 14 years old, was been born into the world after the apocalypse. Ellie will casually ask Joel about the movie posters hung around the city or about what coffee shops were like. The dialogue feels natural and is largely due to the fantastic voice actors that help shape the roles of their characters. It is the attention to detail that Naughty Dog truly understands and delivers that sets a new bar for storytelling in games.

Solidifying the stellar storytelling is the incredible world created for the player to explore. Environments are absolutely gorgeous with remains of the world before the outbreak littered around destroyed cities overgrown with lush vegetation. Helping to create a sense of a living world are the multitude of notes and recorders you can find that give a bit of backstory to whatever environment you’re in. Notes written by people as they try to hold out for survival help the player connect and reflect on the world around you. 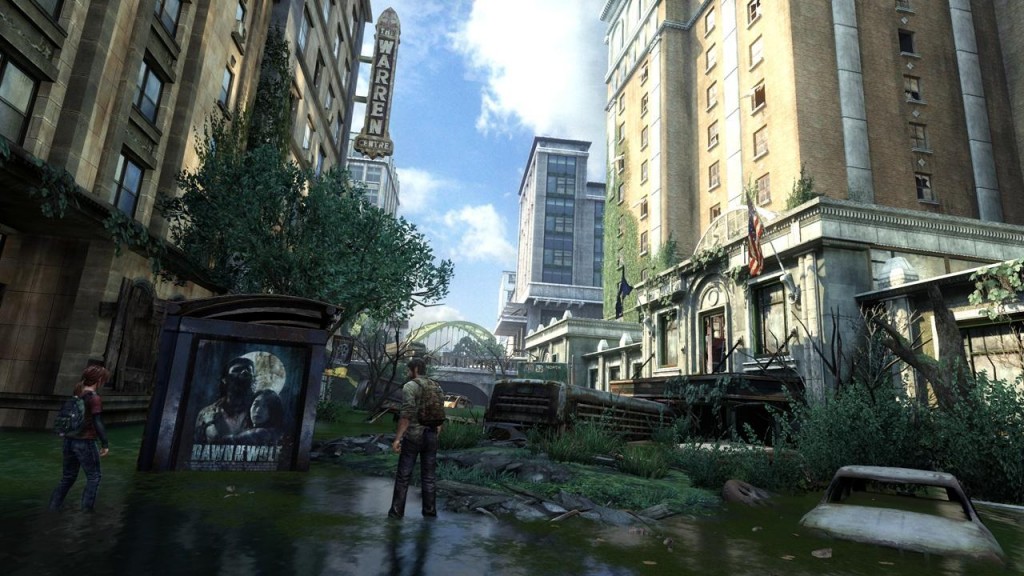 While beautiful scenery is welcomed, the most important part of any survival horror game is creating tension. Luckily, The Last of Us delivers in spades. Rather than give the player tons of ammo and weapons to fight the zombies and hunters, resources are sparse. The areas you travel through require you to actually explore and ransack to find any possible resources. This feeling gives the player a sense of urgency and desperation. Every bullet has to count, and melee weapons such as baseball bats and axes quickly run out of durability, breaking after multiple uses. Along with the weapons are various supplies you can mix together to make different tools. Rags and alcohol can be made into a med kit while knives and binding can be made into a shiv to take down enemies silently. It is these implementations into the game design that help immerse the player into the experience rather than make the player aware they are playing a game.

Along your journey with Ellie, you encounter not only zombies but also various hunters and looters competing to survive as well. These hunters will do anything possible to kill you, and the AI coded into them makes them feel remarkably human. When enemies are stunned, you can point a gun to their heads and watch them beg for their lives. Enemies will try to flank your position or throw molotov cocktails to flush you out from hiding. However, because resources are limited, going in guns blazing is rarely the smartest choice. Bricks and bottles are littered around areas to help distract or lure enemies to be taken out in a stealth manner. Shivs, along with bows and arrows, can be used to take down guards silently to help make the encounter less dicey. Some encounters can even be avoided entirely by just sneaking past the enemies, and sometimes, you may have to if you are low on resources and don’t want to risk losing any more. What helps this style of game play is the environments’ design, which promotes different paths to get past the encounter. The areas are fairly open to allow for a diverse style of play that doesn’t feel forced or too linear.

However, it is the encounters with the zombies that truly inflict tension into the player. The zombies are quick and brutal, and the areas with zombies require careful planning and good crisis management. Along with the regular angry, runner zombies are special blind zombies called Clickers. This name derives from their eerie clicking noise they emit as sonar to find their way around. While they may be blind, their hearing is enhanced to the point that any quick movement may result in a painful, one-hit death. Couple this with the fact that Clickers are especially tough to take down and you’ve got one hell of a tense environment. From the sense of survival to the amazing sound design of the zombies, The Last of Us offers some of the most intense and stressful experiences ever in a game. Almost every encounter completed will be accompanied by a big sigh of relief. It may seem that a game that is stressful would not be the most enjoyable to play, but it is the sense of satisfaction along with the compassion felt towards the characters that drive the player to see the story to the end. 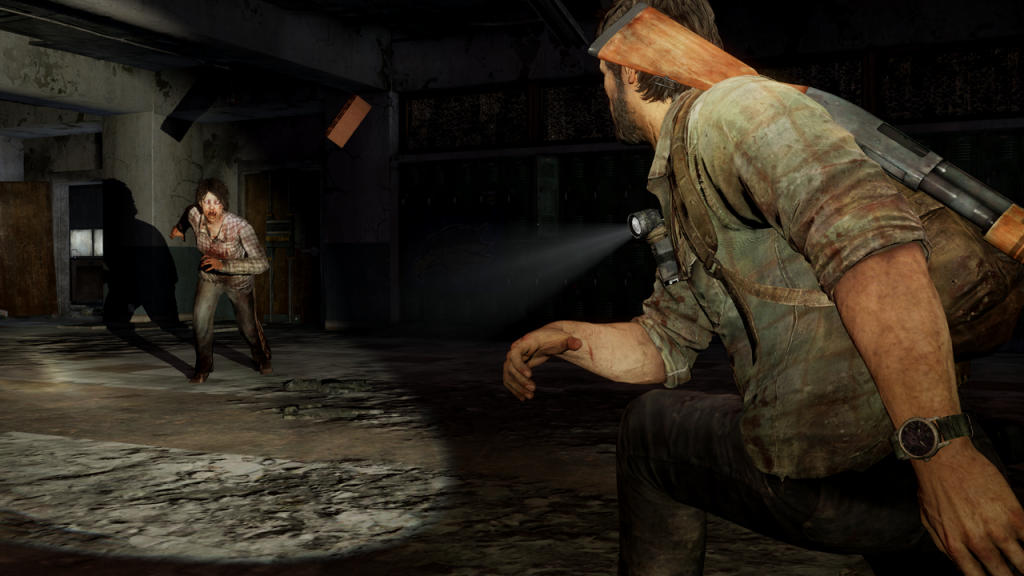 Joel using a brick to defend himself

The game doesn’t just end when you hit the credit sequence. Naughty Dog added multiplayer aspects to the game — a move that seemed questionable for a product so heavily involved in its single-player portion. Fortunately, the multiplayer game play delivers a very solid experience that borrows much of what makes the game play in the single player portion so tense. You join one of two factions, the Hunters or the Fireflies, and based on how well your team does in matches, more survivors that you have to feed join your faction. The concept isn’t entirely crystal clear on how it works, but I can see myself continuing to play to delve deeper into the mechanics of it all.

Multiplayer matches consist of four-on-four death matches in which supplies are scattered across the battlefield. Just like in the single-player portion, these supplies can be made into various items to help gain an advantage over your opponents. Again, ammo is limited, so the sense of desperation is strong in the multiplayer games. Instead of charging into battle like many multiplayer offerings in games, people stick together and reinforce positions to help survive as long as possible. It is a refreshing take on multiplayer third-person shooters and one that is a welcome addition to an already amazing product.

In my long career playing video games, I have never come across a game that has been so expertly crafted, thought out and methodical in its design. The characters are endearing and create a story through each other that is told unlike any other game. The world that is absent of people still has a sense of a living world with the way it has been designed for the player to discover. The game play compounds the sense of struggle that this desolate world creates by forcing the player into eerie and tense encounters. At the end of the 15-hour emotional experience, you continue to have a solid multiplayer offering that doesn’t feel like an afterthought. While no game is perfect and The Last of Us does have some minor flaws, it is hard to deny that Naughty Dog has set the bar very high for games in the future.

The Last of Us is available digitally and at retail for the PlayStation 3.