The Legend of Korra begins right after the events of Book 2 and before Book 3 starts. The story and catalyst for everything that occurs in the game is largely derivative and ultimately a slap in the face of the fans. The story begins, climaxes and ends without any real sense of gravitas. The entirety of the rich world and interesting characters from the cartoon are also lost here. Most of the time in The Legend of Korra is spent following Korra alone with none of her friends beside for interaction.

In games where the story is lacking, I can usually shrug it off if the game play is good, but that isn’t the case here. Given the pedigree of Platinum Games, I expected something much, much better here. The mechanics and concepts of combat are very similar to how most Platinum Games products are played, but the system here never quite clicks. 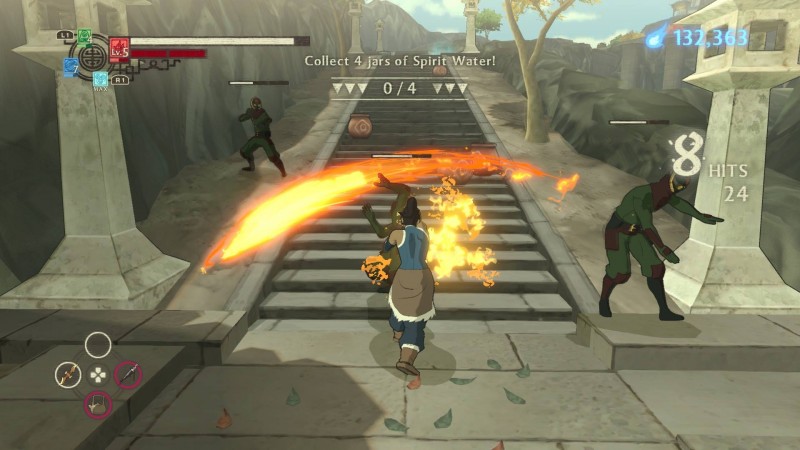 The animations for fighting are great, which can’t be said for the actual combat.

The combat boils down to tapping buttons for light and strong attacks that vary based on what element you have selected to string together combos. Each of the four elements has its own unique fighting style and attacks. Water can shoot at a distance, Earth brings up lumbering chunks of rock, Fire is quick and agile and Air pummels enemies in a sweeping area. Each style can be charged up for more powerful attacks using the Chi gauge that becomes crucial in basic combat. Unfortunately, Platinum Games doesn’t stress the necessity for these attacks nearly enough, which can make the game far harder than it appears to be without that knowledge. In between firing off elemental attacks, you can dodge or block enemy attacks at precise times to counter them. The timing on these counter-attacks is extremely tight and very difficult to pull off until you’ve fought an enemy numerous times.

The overarching problem is that none of the combat systems flow or work well with each other. You can try to swing together different elements in and out of a combo, but more often than not, your combo has to be interrupted to dodge or guard against the swarm of enemies. Counter-attack prompts are too brief for an easy reaction, which leads to sloppy and inaccurate fighting. This is mainly because of the largest offender in The Legend of Korra — the camera.

In the year 2014, I would have never thought that camera problems could still be an issue, but The Legend of Korra looks to keep that trend alive. The camera is never in an ideal position, often at a low and horizontal point so that any attackers that may be coming from your flank are never seen. This problem is exacerbated by the fact that the lock-on system is awful. Locking on to an enemy forces the camera to an even worse position, and at times the lock-on will just go away. These issues make The Legend of Korra an absolute slog to get through because the poor camera artificially inflates the difficulty. 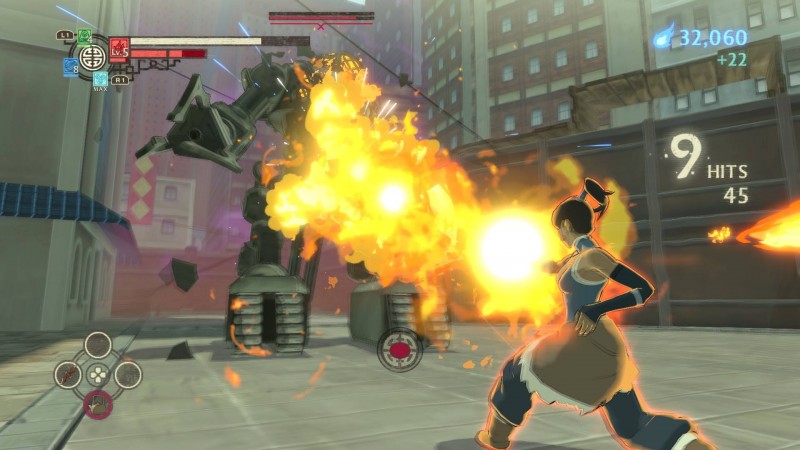 You fight a variation of this giant robot at least five different times.

Even more disappointing are the enemies you battle. There are the Equalists, Element Benders and two mini-bosses. Those are literally all of the types of enemies. Equalists are just regular dudes that try to punch you or trap you with bolas; they’re generally the easy guys that are fun to take out. Element Benders are much stronger and proficient in one of the four elements. These fellows are particularly annoying to play against due to their large health bar and the fact that they typically force you to fight three at a time. Their attacks are often not telegraphed well or even able to be countered, which makes the fights even more painful. Occasionally, a quick time event will pop up for an elaborate counter, but they spring up so sporadically that I was often entering another command as soon as it popped up, leading to failure.

The mini-bosses are formulaic, boring and overall a chore to fight. The lack of budget or development time also forces The Legend of Korra to reuse the same mini-bosses over and over again. It gets pretty damn old pretty damn quick while fighting a giant robot five different times. For a game that has such a deep universe from which to tap, it’s very disappointing that “giant robot” was all that they could muster.

The atrocious Naga running levels are at the end of a few of the chapters. These consist of Korra riding her dog-bear Naga on an endless track while dodging obstacles. It’s basically a copycat of Temple Run, and it’s not very fun. That is all I’m going to say about these levels because that is all the attention they deserve. 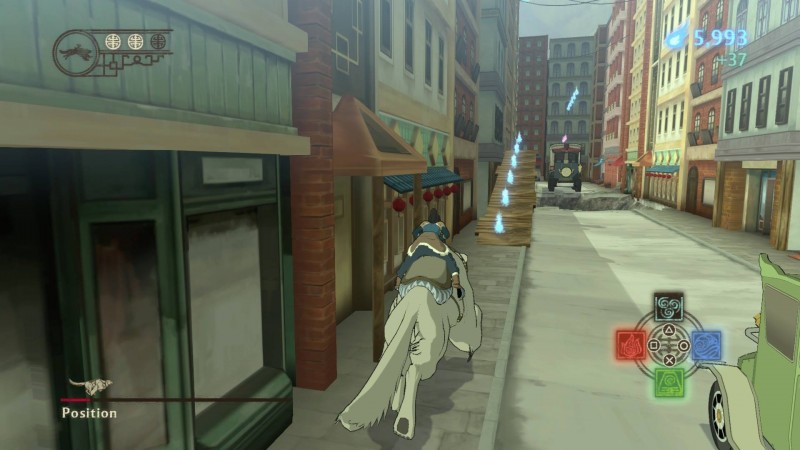 Overall, the structure and pacing of the game are poorly designed as well. Korra is stripped of her powers at the beginning of the game, leaving you to rediscover them throughout the story. The issue is that, by the time you finally unlock all four elements, the game is essentially over after a paltry three hours. There was never a chance for me to feel like I mastered all of the elemental fighting styles and realize the true role as the Avatar. Sure, you can go back and play earlier missions with all of the elements unlocked, but I found no reason to ever endure the piddling combat again.

Usually, my expectations for licensed games are low, but I felt that, with Platinum Games behind the helm, something truly great could have happened here. The fact that it’s only a $15 downloadable title helps soften the blow of disappointment, but The Legend of Korra still remains a subpar game. The small budget and lack of development time show its roots in the limited enemy design, shoddy camera and nearly absent story. I believe that, given the time and effort, Platinum Games could have churned out a fantastic product, but instead, all we have is another throwaway licensed game.

The Legend of Korra is available for the PC, Xbox 360, Xbox One, PlayStation 3 and PlayStation 4.