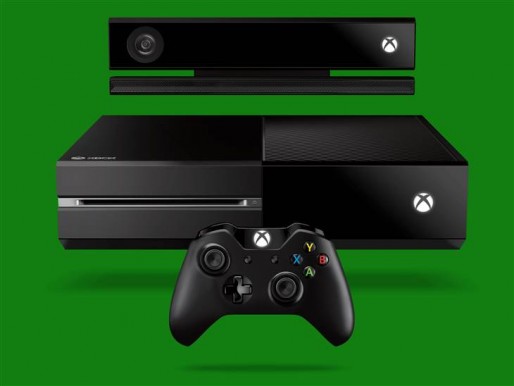 When the Xbox 360 was first announced, gamers were blown away at how much Microsoft was improving on the Xbox. Xbox Live got a complete overhaul, the graphic fidelity in games improved substantially and the interface was innovated upon with features like achievements and leaderboards. It helped usher in, arguably, the best generation of gaming and one that helped bring in a new market of mainstream consumers.

Hearing about the announcement of the next Xbox made me feel like a kid again, excited for what new features and games I could be playing in the near future. Not even five minutes into the Xbox One reveal, I started to feel uneasy about the future of the Xbox brand. Buzzwords were constantly being spouted by people I didn’t know or care about, saying the Xbox One will offer things like “immersion,” “new experiences” and “social integration.” The announcement could’ve lasted about 30 minutes less if the presenters had disregarded the fluff talk and got right to the interesting points. I shouldn’t have to hear a company consistently explain to me why their product is great; I’d rather have the product be amazing on its own stature.

Where Sony and the Playstation 4 announcement decided to focus on games — the things the console was famous for — Microsoft decided to completely abandon the core gamer in favor of social media and entertainment. Features like using Skype and Bing while watching a movie were touted as revolutionary, trying to integrate every possible electronic device into one. The only problem with this is that there are alternatives that seem far easier and efficient to use. Why would I want to shout at my Xbox to Bing who is in Star Trek when I can just use my phone?  Why would I want to Skype someone on my couch when I can do it on my laptop for a more intimate experience? The ideas that Microsoft presents are interesting in concept; it’s just hard to imagine people caring to fully exhaust these options to their full potential on a box traditionally known for gaming. 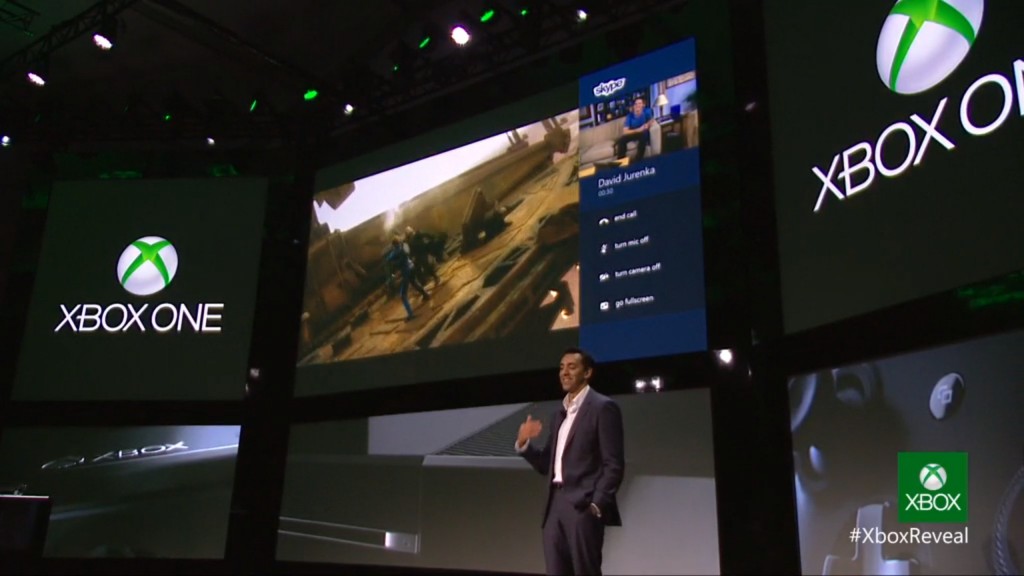 You can Skype your friends during a movie or game.

Microsoft clearly knows their mainstream gaming audience and understands what their interests are. This largely involves sports and Call of Duty, both of which were huge focal points for the conference. Electronic Arts announced a small partnership with Microsoft, proudly emphasizing a measly exclusive mode for FIFA 14 with Xbox One. EA Sports showed off their new engine. It all looks pretty, but it feels like the same thing over and over again. How many times can we be excited about a new engine that makes tackles look more realistic or computer AI more advanced? About the only real interesting feature that many people will love is the integration of fantasy football stats with real time updates during games you’re watching. It’s a great way to keep sports fans interacting with the Xbox One, and it makes the process more streamlined. Again, this seems to be the focus of the Xbox One: a unified platform so that all other devices are unnecessary. But the result of this is that hard-core gamers are getting the shaft.

The first Xbox grew in popularity with hard-core gamers staying up at all hours of the night playing Halo 2 on the impressive online service that is Xbox Live. This online experience evolved on the Xbox 360 with games like Gears of War and Forza as well as the myriad of excellent titles on Xbox Live Arcade. However, at the Xbox One announcement, games seemed to be set on the back burner. All we saw was a mishmash of EA Sports games, a Forza sequel, a nonsensical trailer for an exclusive titled Quantum Break and a “revolutionary” Call of Duty game that seemed to want to emphasize dogs as much as possible. Microsoft went even as far to say that there will be 15 exclusive titles in the Xbox One’s first year, but they only barely announced one.

For this particular conference, it seemed like Microsoft just didn’t care to reach out to the core gamer. As someone who grew up spending countless hours playing amazing games on the Xbox consoles, I couldn’t help but feel annoyed at Microsoft’s attitude toward the next generation of gaming. Also sickening is the fact that Microsoft will continue to charge people an annual subscription fee just to play games online, a feature that is universally free on every other device that allows online play.

What is even more saddening is that this particular strategy that Microsoft is taking will be incredibly successful. The single fact that they still maintain the timed exclusive on Call of Duty downloadable content is enough to make their system the leader for the next generation. The mainstream gamer will continue to purchase their yearly copy of FIFA and Call of Duty and every possible add-on that goes with them, and the Xbox One seems to be the platform most appealing for that type of gamer. These mindless drones will continue to pay their subscription fee and play these games that lack any real innovation, and Microsoft will laugh all the way to the bank. 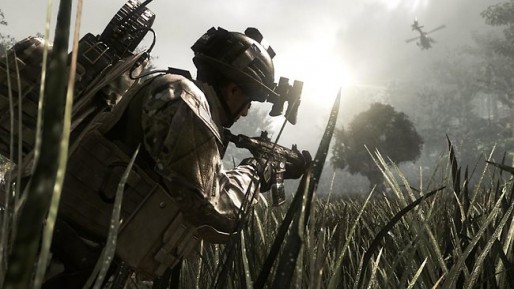 This isn’t to say that the new Xbox One isn’t an interesting foray into the entertainment division. The idea of seamlessly transitioning between games, TV and movies seems like an awesome concept if it works. Microsoft constantly tried to shove Kinect down our throats for the Xbox 360, but ultimately, the hardware was horrible and I still don’t know anyone who actually uses it. It will definitely be exciting to watch how well the new Kinect actually works over the next year or so, but history shows that hardly anyone enjoys flailing their arms around and yelling at a TV. The Kinect needs to evolve from gimmick to an actual piece of hardware I want to use as the motion control fad has certainly been long forgotten at this point.

So what is my assessment of the Xbox One? It is a nice, solid machine that will offer the same experiences on every other platform but with a bit more nuances into the entertainment department and a subscription fee. The mainstream gamer will continue to stay on the Xbox One to play with their friends and get all the same, stagnant experiences as they did on the Xbox 360. Meanwhile, the core gamers will continue to find comfort in Sony and the Playstation 4 as it pumps out a number of fantastic exclusive titles and serves as a safe haven for indie development. Of course, there is still a lot of time before the Xbox One ships; much info is still to be released.  For now, I’m displeased with what I’ve seen, and my relationship with the Xbox brand is starting to diminish.