By some weird grace of God, a rerelease of Turok: Dinosaur Hunter for the Nintendo 64 just appeared on Steam for PC last month as, simply, Turok. I have oddly fond, yet vague, memories of Turok back when I rented it for a week when I was only around six years old. I remember being thoroughly confused about where to go and how to aim properly, but I enjoyed the mystification of it all nonetheless because I was a dumb child. Fast-forward to today, and surprisingly, Turok holds up quite well thanks to the massive improvements included in the port.

Nothing really makes a whole lot of sense about Turok. You’re a Native American, running around jungles and ancient cities shooting giant guns at monsters and enemies. Funnily enough, despite having “Dinosaur Hunter” in its name, Turok has you fighting far more humanoid enemies than dinosaurs. Anyway, Turok is very much in line with old-school, first-person shooters. Turok himself moves quite fast and has a vast array of weapons to use. Levels are designed around multiple areas that are filled with secrets that you can explore while maintaining a singular focus of finding the keys in each level. Find all of the keys, and you can progress to the next area. 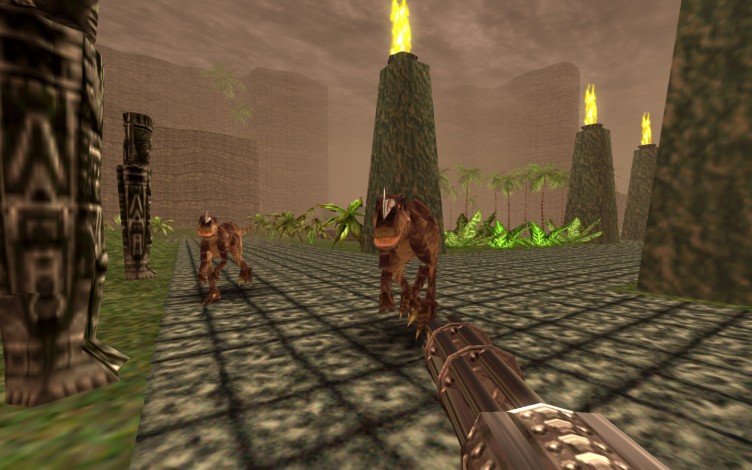 Turok promotes historical accuracy with its depiction of a Native American blasting dinosaurs with a mini-gun.

One of the core mechanics of Turok is the array of weapons at your disposal. Because ammo is limited and enemies are abundant, you constantly switch between weapons to conserve ammo. Weak, bug-like enemies can be taken out with a couple of potshots with the assault rifle, whereas the monstrous ogres require more heavy weaponry like the explosive-shell shotgun. There’s a certain sense of strategy that has to be used with each new encounter, and that strategy has to be thought of very quickly and fluidly because of the fast-paced nature of the game.

After suffering through painfully boring, linear shooters for the past five years or so, Turok’s open level design is refreshing. Levels branch out into different expansive areas filled with enemies, with no hand-holding telling you where to go. Because there are keys spread throughout the level, each path is worth exploring because it may lead to one of the keys. Many times, they just lead to a secret stash of ammo or a new weapon, but either way, the joy of discovery is strong here. Missing a key your first time through a level isn’t annoying. It’s rather enjoyable as you speed your way back through the level, looking for new secrets or paths.

While this style of first-person shooter isn’t revolutionary, because the execution is sound, Turok is better now than it ever was on the Nintendo 64. This is mostly because of the solid port to the PC. The frame rate now has a rock-solid 60 frames-per-second, 1080p resolution, increased view distance and keyboard and mouse controls. The Nintendo 64 was not exactly a powerhouse, and as a result, Turok did not look good, nor did it control well due to the single joystick scheme. After playing with keyboard and mouse controls, I’m baffled that anyone could even play Turok on a Nintendo 64 controller. The only downside is that the difficulty is reduced because of the much better aim.

PC on the left, Nintendo 64 on the right.

I died a bunch of times because of the endless pits. Turok was unfortunately born in the era of 3D platformers, and as such, it is filled with 3D platforming. I was okay with most of the platforming, but certain sections force it upon you with death as the penalty for missing a single jump. This problem is compounded by the archaic save system. There are only a few save points throughout each 30 to 45-minute-long level to record your progress, while a few checkpoints are thrown in between to help lessen the pain. At times, I enjoyed the feeling of panic in that, if I were to die, I’d have to retread so much ground. When death happened because of clunky platforming sections, that feeling turned into frustration.

Despite being 18 years old at this point, Turok is still a ton of fun. Maybe it’s because of the lack of old-school shooters nowadays, but something about Turok just clicked with me. Cruising around the jungles, blasting enemies with alien weapons and discovering secrets are all seamlessly connected together to create a high-octane experience. The port is given enough care to improve the Turok template. While $20 is a bit pricey for a port of a Nintendo 64 game, I was thoroughly surprised by what I got — a weird, thematically insane first-person shooter that plays better than most shooters released these days.