Upon starting Unravel, a message from the developers comes across the screen. They thank me for buying Unravel and hope that I will enjoy their labor of love that is sure to bring an emotional journey my way. By the time the credits rolled, the only emotions that I had felt were frustration and boredom. It seemed that the developers were so concerned with creating something beautiful to look at that they forgot to put an actual compelling game in there somewhere.

Unravel is the story of Yarny, a little doll made of yarn who travels through the memories of the family who created him. That opening developer message had baited me into thinking that there would be some emotional story that I would be uncovering. Instead, I was disappointed to find little to no narrative hook. You slowly piece together the story of this family through pictures that you find — their highs and lows — and I kept waiting to care about any of it.

By far, the best thing that Unravel has going for it is the astonishingly good presentation. The worlds that Yarny explores are seen through his perspective; a simple chair is a giant obstacle to overcome. Everything is rendered in almost hyperrealism with grasslands and trees having an incredible amount of detail and visual flourish. Occasionally, I’d stop to just admire the artistic view while Unravel’s outstanding original soundtrack played on. Unforunately, that’s about the extent of anything worthwhile in Unravel. 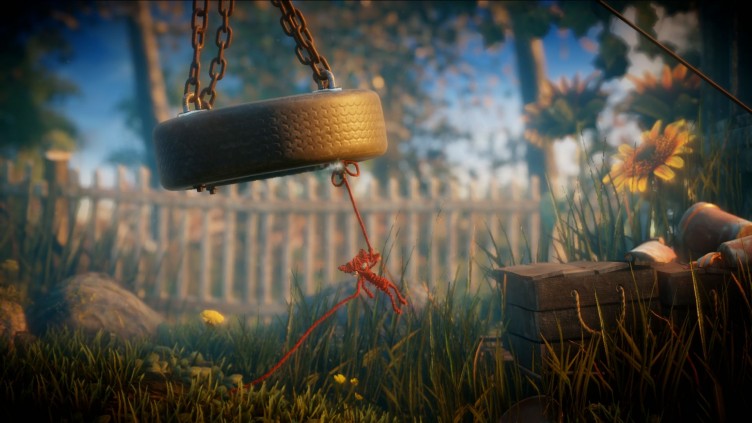 In these beautiful worlds, Yarny must solve physics puzzles and platform his way to the end of the level. The problem is that neither the puzzles nor the platforming are interesting in the slightest, with the puzzles getting the short end of the stick. The main hook with Unravel is that Yarny can use his yarn to get past obstacles in various ways. He can swing around the environment, build bridges with his yarn and push and pull objects — all pretty simple stuff.

These mechanics are used to create the most basic of puzzles possible, and then those puzzles are repeated over and over. I don’t know how many times that I had to create a bridge with some yarn and then pull an object over the bridge. There isn’t anything fun about this slow process, and it certainly didn’t take much use of my brain to figure it out.  Other times, the solutions to some puzzles required me to make bizarre leaps of logic or mess around with an object until it worked properly. The terrible physics of the objects multiplied this frustration even further. Sometimes, Yarny would just let go of an object or the object wouldn’t want to cooperate in going where it needed to go.

Because Unravel went with a hyperrealistic 2.5D style, this creates problems in guiding the player in the right direction. It was hard to make out which parts of the environment were available for interaction. Multiple deaths were spent just figuring out which things were dangerous or what needed to be done to progress. Most annoying are the instances where the developers cherry-pick certain obstacles to put in the foreground. It might be a nitpick, but why do I have to solve this elaborate puzzle if I can just sidestep around this log? 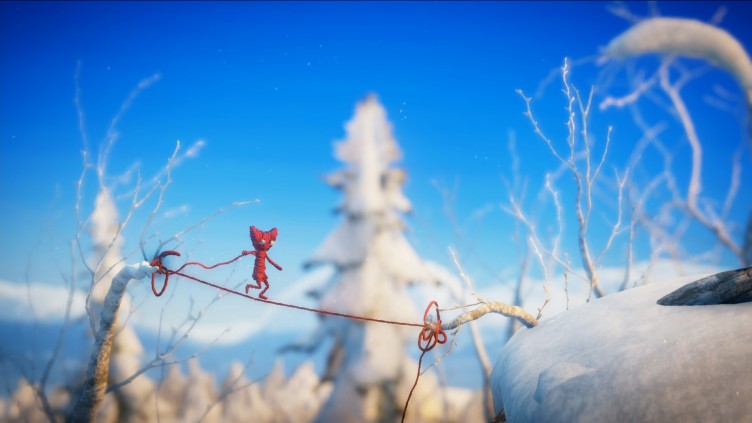 The puzzles in Unravel are terribly boring.

Similar to the poor puzzle design, the platforming is pretty weak. I don’t know how the developers made swinging through a beautiful sunlit forest boring, but they went and did it. The swinging mechanics are almost never tinkered with to create new and exciting challenges. Much like how the simple puzzles are reused, certain platforming sections are repeated over and over with little to no differentiation. It doesn’t help that Yarny’s controls are sluggish and inconsistent. Dying because of awkward controls isn’t uncommon, but it’s always frustrating.

Looking at the overall picture of Unravel, I can’t help but feel that the developers spent all of their time creating these gorgeous environments and then forgot to put the fun in. Time and time again, the camera pans back as if to say, “Hey, look how beautiful this is!” and then does nothing interesting with that space. Unravel is supposed to be about a whimsical yet emotional journey with this adorable doll, but far too often, it gets bogged down in inconsistent platforming and puzzles. Once the climax of Yarny’s adventure came about, I had already stopped caring about Unravel, and you shouldn’t care about it either.

Unravel is available for Windows PC, PlayStation 4 and Xbox One.