A 26 year-old Negro League baseball player finds an unlikely benefactor and is given the chance to break Major League Baseball‘s color barrier while wearing number 42. 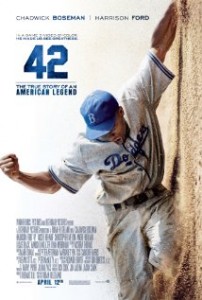 Jack (Jackie) Robinson‘s journey from the simple buses of Negro League baseball to becoming the first black player in the all-white Major Leagues  since a color ban was instituted is a story as pivotal as that of Neil Armstrong‘s one giant leap for mankind 22 years later. The life Robinson led was filled to the brim with challenges, intrigue, drama, thrills and a complexity far beyond a simple white/black demarcation. It’s a story that deserves an honest, in-depth analysis and celebration of hard-fought achievement. 42 is not that story.

This is a film I was — quite frankly — insulted and disgusted to have experienced. It represents the absolute worst of what Hollywood is capable of producing. Writer/Director Brian Helgeland owes everyone who sees this a heartfelt apology while the studios that supported it owe them a refund.

Every character is reduced to base caricature, magnifying stereotype upon stereotype. They’re all paper-thin and, unlike his real life, set permanently in stark shades of only white and black — and I’m not referring to race in any way.

Imagine a flowery, always light-hearted musical like Oklahoma and take away the music. That’s the aura one gets from this treatise. History rides in the back of the bus here.

Take, for example, Dodgers famed manager Leo Durocher (Christopher Meloni). Helgeland can’t wait to give us a scene where the oft-quotable skipper states emphatically, “Nice guys finish last.” The only problem is, Durocher never said it. In his own biography Durocher dispels the myth of this “quote”, explaining that his actual words were meant to say the exact opposite. Liberties of this type run rampant through every sugar-coated, predictable page of dialogue.

Few who fall under Helgeland’s camera are spared this treatment. His direction with regard to children is most disconcerting. Here Helgeland paints a portrait of black youth in 1940s Brooklyn so idyllic that you’re left questioning their need for the type of hero Robinson represents — a glimmer of light in the darkness that accompanies the shadows of racism and poverty.

42 is a film that feels as if it was plucked straight out of the early 1970s. It brings back every bad element of what a Disney film of that era tried to pass off as entertainment. This is neither the 1970s nor a Disney film. Racism of the worst kind — a core element in Robinson’s life — is represented only through rose-colored glasses. This serves to only diminish the pain, agony and, ultimately, achievements of the first modern black player in Major League Baseball.

The acting is fine but the casting is a mess. Harrison Ford embodies famed Dodgers owner Branch Rickey. He does a commendable job and it’s almost hard to believe it’s him but it’s so unlike anything he’s done before that you can’t stop thinking, “Wow, that’s really Harrison Ford in there.” It’s a distraction.

Note also that I mentioned Ford as Rickey before getting to Jack Robinson. For a biopic on Robinson we seem to get an awful lot of Rickey. Make no mistake, Mr. Rickey was a huge player in this part of Robinson’s story but not as central as portrayed. The Jack Robinson we do experience is played admirably by TV vet Chadwick Boseman. The problem is that his body type is entirely wrong and diminutive by comparison to the real man. Was that just an oversight or an over slight? Relative newcomer Nicole Beharie fares best of all as Jack’s wife Rachel but has to deal with the limits of being asked to play a mannequin. Her real life counterpart was a wonderfully normal, down-to-earth woman with real relationship issues. Here she’s just the perfect angelic wife content to live forever without any needs of her own.

Consider the HBO film 61*. This is the story of Roger Maris‘ and Mickey Mantle‘s 1961 chase of the single season homerun record held by beloved icon Babe Ruth. That effort pulled no punches and told the story straight. Robinson’s real life story deserves nothing less. I knew this film was doomed the moment I read the early subtitle, “Based on a true story”. Robinson’s story requires no softening or dramatic plot embellishments and yet this script does so with a reckless abandon that’s simply unfathomable. It is, dare I say, a complete whitewashing that comes off like a reinvention of events as told by a partially repentant bigot. I don’t believe that was Helgeland’s intention or perspective but I can’t ignore the feelings. Why did every single team in baseball retire Robinson’s number (the only player to ever receive that honor)? You’ll never figure it out from this film.